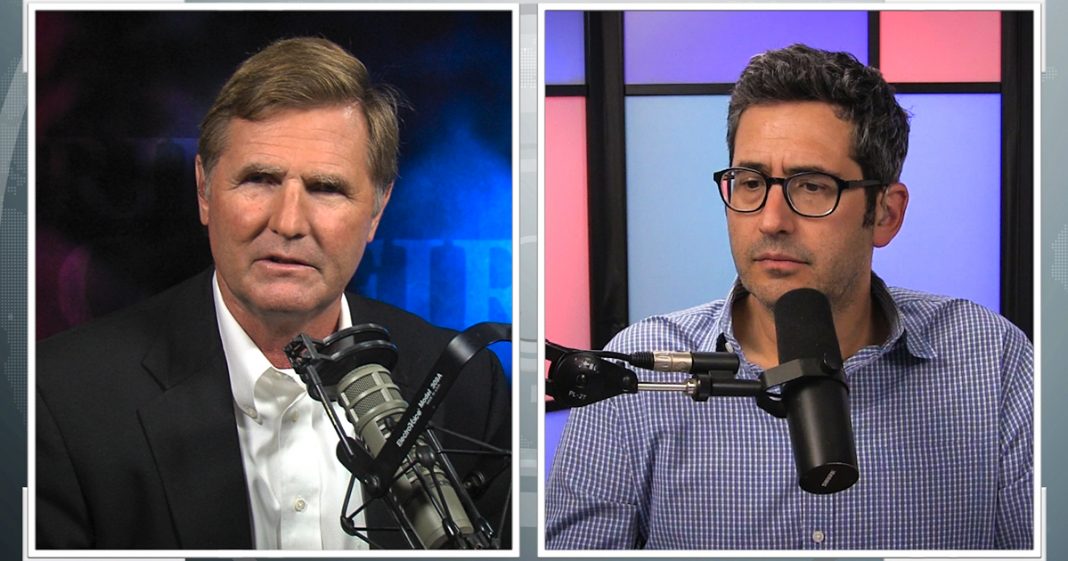 A couple of weeks ago, United Airlines was roasted on social media for a shocking video in which a passenger was forcefully removed after refusing to give up his seat to make room for members of another United Crew. Ring of Fire’s Mike Papantonio & Sam Seder discuss the legalities of the situation and explain why airline deregulation has led to the demise of passengers rights.

Sam: Pap, when we broke we had just teased … Talking about this United Airlines debacle that took place a week and a half ago and this … It’s an unbelievable video of a man, it turns out to be a doctor, dragged from his seat. It turned out to be this guy David Dao. He refused to voluntarily give up his seat, as they were looking for volunteers, but everybody was seated at this point. This wasn’t one of those things at the gate where they say, ‘We’ll give you X amount of dollars.’ They weren’t even offering very much money, I have to say, I’ve been booted off of flights where they say, ‘We’ll give you $1,100 in essentially, not quite cash, but an Amex gift card.’ For me, I jump out of the seat and I run across, but I’m not a doctor, I don’t have patients waiting on me. A lot of people say there’s nothing he could do about this, because it’s in the contract, but that’s …

Pap: No, no. You know what really bothers me about this case? Sam, is that the way corporate media has handled it. It’s like they have butchered this story. They butchered it from the very beginning by trying to sell this idea that the airplane was overbooked. It wasn’t overbooked. It was fully booked, and then since it was fully booked and this man had his chair, he already had his seat, they simply made a preference and they said, ‘Well, we don’t want you to have the seat, we want one of our chosen people, somebody that works for us to have the seat.’ That’s the first flaw in the way that the media has handled this. The second is, where have you really seen television media going and talking about this … Rather than talking about the symptom, talking about the problem, which is deregulation. They hit all around it, but never go and say, ‘This is all the product of regulation.’

It used to be where you had for every hub air field, you would have 12 or 15 competitors. Well, that’s down to four or five now. What’s happened is, media won’t talk about it, because why? Because, ‘Fly the friendly skies of United.’ Delta, look at all the advertising they do with all these corporate media types. They’re not really doing anything about this, they’re not going back to the … There was a great case. Allegheny Airline used to be called Agony Airlines, because it was just disgusting the way they treated people. Ralph Nader sued them and actually they had to start making some changes in what they did. Now, the truth is before we started deregulation, you did not have these problems, okay. You didn’t have the price gouging, you didn’t have the problem of these rules where penalties are charged for everything. I mean, everything, you got a penalty charge.

You didn’t have this problem with the airline trying to pack on every possible passenger that they could, even in light of the fact that it is a safety issue, because sometimes you don’t have enough crew to take care of the problems that arise when you pack every single chair. You didn’t have that problem before you had deregulation. You didn’t have problems with this price gouging that’s developing because of the monopoly that’s developing in the airlines. Absolute price gouging. Delta watches United, they say, ‘Well okay, how much you charging for this route?’ They’ll charge the same thing. I don’t know if you’ve ever … Do this some time, this is very interesting, call Delta Airlines and say, ‘I want a fair from here to Kansas,’ wherever, and then watch as the airplane starts filling up those prices start skyrocketing.

You can get … Matter of a fact, you can get a price one hour and then call back five hours and the price will be three times what they told you and you’re out of luck if you didn’t buy it the first time. These problems with regulatory … These regulatory problems are killing the American consumer where it comes to air travel and there’s such an arrogance. I’m telling you, Sam, it is such a thuggery kind of arrogance within the airline industry. They don’t really care. You hear Delta say, ‘Oh well, we’re going to give … Our new price is $10,000 that we’re going to … ‘ They’re not going to give away $10,000. You’re never going to see that. The average person knows that once the threshold gets to be about $1,200, they’re going to sell the seat. This is going to go on, because legislature won’t do anything about it. It is absolutely gangster corporatism. It is the worst of the worst.

You know the real zinger here? You know who started this? It all started, the deregulations started with Jimmy Carter, because he was in Atlanta and Delta’s hub is in Atlanta. Now everything’s built around hubs. You didn’t use to have hub kind of planning. You could have a direct flight from Pensacola to Memphis, or Pensacola to wherever, without having to go to Atlanta first. See, the Atlanta first is part of the price gouging, that’s where they get you. Rather than saying, ‘Okay, well we’re going fly Pensacola to Kansas or whatever.’ This whole hub gimmick that they’ve put together, this came directly out of the deregulation. It started with Jimmy Carter and then of course, every republican president, Reagan included, made it worse and then the guy that really made it worse, oddly enough, I guess not oddly enough, was Bill Clinton. After Glass-Steagall, which he deregulates after telecommunications deregulated, he goes in big time for the airlines and deregulates even further.

Sam: Well, I mean, part of this too it seems to me is a function of sort of the Robert Bork Chicago school notion of antitrust, right? Where the idea that the government got involved in antitrust issues, it changed their perspective. It was one that supposedly, it was not measured on how much competition it stifled. It was rather, whether or not the consumer supposedly benefited in some fashion, so it sort of gutted the principles of avoiding monopolies and-

Pap: Where is the passenger benefiting here? That’s the question both you and I would ask. We don’t-

Sam: Well, and I would say that those gains that happened initially end up fading-

Sam: As the monopolies go on. That’s really what we have a problem, right? When we talk about you’ve got specific airlines that are operating in hubs, those are basically mini-monopolies, and so there’s a lack of competition in those areas and we see this across the board, whether it seems to me to be in cable television, or internet providing issues. We see this certainly online with things like Facebook and Google. I mean, this is a big issue I think that I think there’s a lot of people who are looking for the democratic party to really make antitrust issues-

Sam: A pillar. I mean, there are people, Elizabeth Warren, Zephyr Teachout who we talked to in this program this week just coincidentally. These are people who have really pushed for antitrust legislation and-

Pap: They’ve got to have some help from the rank of file democrat, that’s the problem. You’re always going to have bright spots, you’re going to have Elizabeth Warren, kind of a bright spot, but where it comes to the rest of the party, it’s no different from the republicans. They’re looking, ‘Where’s daddy going to be with our money,’ and that’s what they’re up against with the airline industry. The lobby is massive, the amount of money they put into lobbying these legislators is massive. I just don’t see much happening. There’s a great article by Robert Kuttner in New York Times where he talks about this started out where you had kind of a competitive cartel, and then as the competitive cartel started to explode, you had basically competition that had actually ruined the value in the operation of airlines and then rather than fixing that, we came in this with this non-competitive cartel, or this abusive cartel, as he describes it. That’s where we are right now with this thuggery abusive cartel of an airline industry.

Sam: Well, hopefully the democrats will pick up the ball on this, but like they say, hope springs eternal. Pap, always a pleasure.