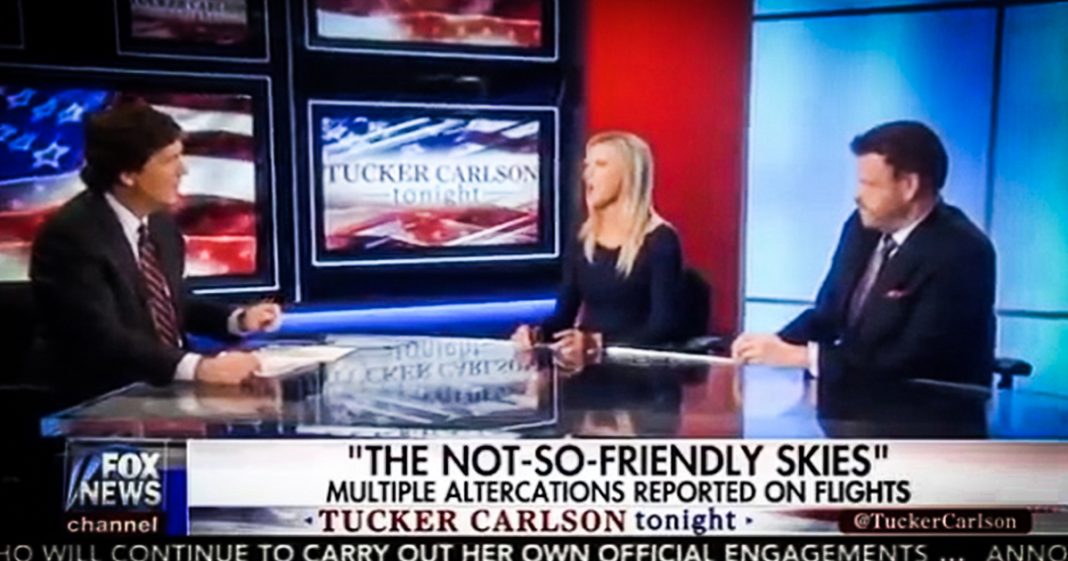 Right wing commentator Mark Steyn appeared on Tucker Carlson’s Fox News program last week to take a swipe at the victims of the 9/11 terrorist attacks by saying that the passengers on those airplanes failed to take on the hijackers, and therefore they were somehow complicit in the attacks.  Ironic, considering that Fox News has milked the 9/11 attacks for ratings and used them as an excuse to drum up hatred towards Muslims. Ring of Fire’s Farron Cousins discusses this.

Cousins: Fox News has always been phenomenal when it comes to blaming the victims of, really, any form of catastrophe. If you’re poor, it’s because you’re lazy and/or you do drugs. If you get raped, it’s because you’re a woman who dressed a little too provocatively and probably drank too much, according to Fox news. What happened this past Thursday night on Tucker Carlson’s show takes victim blame, even for Fox News, to an entirely new level. Take a look.

Steyn: It’s actually a serious point, here. On 9/11, guys with box cutters killed thousands of people. That’s because everybody was following the 1970s airline hijack procedures and did as they were told. They did not act as free thinking individuals, except on flight 93. That was the only one where free born citizens actually acted like free born citizens.

Cousins: That’s right. If your plane gets hijacked and crashed into a building, it’s probably your fault. I guess you were sitting there, maybe you had your headphones on. You’re watching the movie. You weren’t quite sure what was going on, but somehow, according to this Mark Stein, a right wing commentator on Fox News, you’re complicit in the whole thing if you don’t stand up and go start killing terrorists on an airplane somehow.

The real irony here in this entire segment is that Fox News is the network that has milked the tragedies of 9/11 since they happened. They’ve milked it for ratings, they’ve milked it to help spread their anti-Muslin propaganda, and hatred across the United States. They used those attacks to prop up George W Bush and to attack every single democrat that ever ran for public office.

They had Rudy Giuliani on their network hundreds of times, where all he could say was, “9/11, 9/11.” It was a sacred talking point to them, and now how quickly things change. Now suddenly it’s the passengers’ fault. I guess, like the republican … Maybe you need more good guys with box cutters, like their “good guys with guns” talking point.

The truth of the matter is that we don’t necessarily know exactly what happened on those flights, and unfortunately we never will, but for anyone to even suggest that the people on those airplanes that died on 9/11, to suggest that it’s somehow their fault, or that they were complicit, that is, by far, the most disgusting thing I’ve ever heard from a republican, ever, ever.

We hear pretty disgusting stuff coming out of republicans every single day, but to take a tragedy like that and turn it into the most absurd case of victim blame ever, fox news and Tucker Carlson, for allowing this to happen, have hit a new low that even I didn’t think they were capable of sinking to.