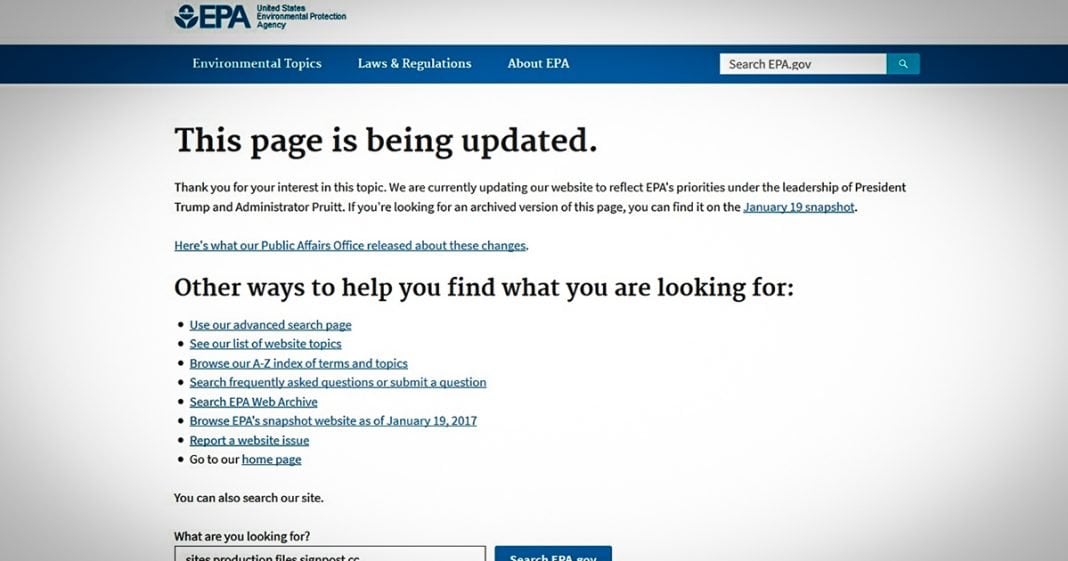 A section of the EPA’s website that explained the causes and effects of climate change disappeared at the same time that scientists and science advocates were marching on Washington. The administration claims that they are updating the website to reflect the new direction and focus of the agency, but that’s just code talk for “we don’t believe in climate change and won’t be addressing it.” Ring of Fire’s Farron Cousins discusses this.

Last Saturday, tens of thousands of people showed up in Washington, D.C. to march for science. They included scientists, science advocates, and generally, people opposed to the moves of the Trump Administration. Now, at the same time that these people were marching, to get this administration to pay attention to science, the EPA decided to remove all mentions of climate change and their dedicated climate change page from their website.

Now according to the administration, this was just a move. They’re just trying to update the EPA’s website so that it focuses now more on their current mission. Meaning, “Yeah, we got rid of the climate change website, but it’s because we’re not going to do a damn thing about climate change in the next four to eight years.” That is exactly what this march was about. This is an administration that is not listening to the American public at all. At all. They don’t care. They believe that they can operate with absolute power, do absolutely anything they want to do. And we’re just going to sit back and take it.

So while people were out there marching saying, “Pay attention to the science, because, yeah, you know what? Our lives kind of depend on it.” This administration said, “(blowing raspberry) Not going to happen. We’re going to scrub it from the website.” And that is the attitude and the mentality of the Trump Administration. I guarantee you, they did not pay one bit of attention to what any of those speakers had to say on that Saturday. Because they don’t care. But more importantly, they don’t believe it. Either because they honestly don’t believe it, or because they’re being paid to not believe it, by lobbyists, and corporate campaign donors. Because that’s what we’re dealing with in Washington, D.C. That is what we’re up against.

And it is mostly Republicans, but don’t get me wrong. There are enough Democrats in that mix, too, that are preventing meaningful action on climate change. I mean, when Obama had the House and the Senate and the White House, we still didn’t get climate action. I mean, we got a few orders for the EPA, things like that. He reversed a moratorium on off-shore drilling shortly after the BP accident in the Gulf of Mexico. So no, he wasn’t a great climate president. I know a lot of people say he was, but trust me, I covered it for eight years. He wasn’t that great. But he was a hell of a lot better than what we have now. And at least, he knew that climate change was real. He listened to scientists. He didn’t always follow their advice, but at least he listened. And he understood.

But just like most politicians, he got bought out. He allowed his party to get bought out. The leadership at the DNC allowed the party to get bought out. And it took Trump getting elected for people to finally get pissed off enough to go out there and do something. And that’s what that Saturday climate march, science march, really was about. And that’s what we’re going to have to continue to do. We have had more scientists speak out against Donald Trump than any other president in United States history. Because they understand. These are people who do this for a living. They know that our lives depend on our government understanding, accepting, and listening to what the scientific community has to say. And when they shut that door, they put all of our lives, including their own, at risk.