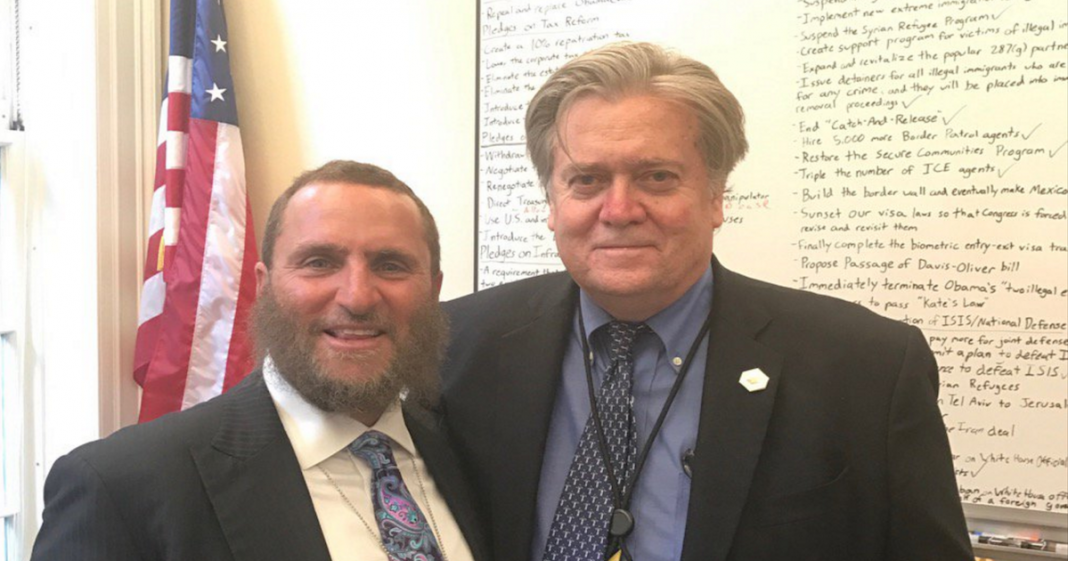 On Tuesday, Rabbi Shumley Boteach posted a picture to his Twitter account. In the picture (yes, I know it isn’t REALLY a selfie), Rabbi Shumley is standing next to Trump’s chief strategist, Steve Bannon. Directly behind Bannon, there is a white board with bulleted items, many are checked off. It appears that Rabbi Shmuley accidently posted a portion of the administration’s policy checklist.

With @SteveBannon in the White House on #israelindependenceday. Steve is a great, stalwart friend of the Jewish State pic.twitter.com/PFxSCK7blc

With headings like “Pledges on Obamacare” and “Pledges on Tax Reform” the list shows many of the Trump administration’s most ambitious plans. Items like “Repeal and replace Obamacare,” “Cancel all federal funding to sanctuary cities,” and presumably “Eliminate the estate tax” litter the board. Most of those proposals come as little surprise, as they are positons that Trump has touted publicly.

-“Sunset our visa laws so that Congress is forced to revise and revisit them.”

According to Skrift, a media and research site concerning the travel industry, changing the visa program could be incredibly damaging to foreign-born workers. The fear is that Trump would issue an executive order pausing the issuance or renewal of visas until Congress can pass more restrictive laws. Skrift’s Andrew Sheivachman says:

“This would likely cause chaos for foreign workers in the U.S., who wouldn’t be able to renew their visas, and deny international travelers access to the U.S. if the restrictions are far-reaching.”

As for the Davis-Oliver Act, it is a wide-sweeping immigration reform bill that was first introduced by Representative Trey Gowdy and then-Senator Jeff Sessions in 2015. It was named after Michael Davis Jr. and Danny Oliver, two law enforcement officers that were killed in 2014 by Luis Enrique Monroy-Bracamonte, who was in the United States illegally, after being previously deported twice.

The bill is seen as a measure to punish sanctuary cities, while allowing state and local law agencies to enforce federal immigration law.

Just like now-Attorney General Sessions has proposed, the bill would end federal law enforcement funding to those cities and counties that do not cooperate with federal immigration detainers. But, more funding would be issued to states that wish to increase efforts to round up undocumented immigrants.

The Davis-Oliver Act would also authorize increased penalties for certain immigration-related laws, like passport fraud. Deportation policies would also be expanded to cover legal immigrants that are connected to known criminal gangs.

The conservative leaning publication, The Daily Caller says that a House Judiciary Committee aide confirmed to them that,

“Committee chairman Bob Goodlatte has been in communication with the White House about the Davis-Oliver Act. This bill has always been a top priority for chairman Goodlatte and hopes to have it reintroduced soon.”

It seems that the Trump administration, with Steve Bannon at the helm, is hell-bent on curbing both legal and illegal immigration in this country. After all, Bannon revealed on his XM radio show last year that he feels that legal immigration is the real problem facing our country:

“As horrific as that is, and it’s horrific, don’t we have a problem? We’ve looked the other way on this legal immigration that’s kinda overwhelmed the country?”

Bannon would go on to decry that Silicon Valley is full of too many highly skilled workers from Asia:

“And now you got all the engineering schools full of people from South Asia and East Asia. And it’s not that I have any problem with those folks learning, but they are coming here to take these jobs. You have turned over the entire American education system — we have cut out art, we have cut out history, we have cut out music. Why have we done it? STEM, science, technology, engineering, and math. We have told every minority kid in this country, you got to excel at that. What happens? They get into graduate schools, they can’t get engineering degrees, they can’t get into graduate schools because there are all these foreign students, when they come out, they can’t get a job.”

That’s the real issue to Bannon. It isn’t even that low-skilled workers are coming to the country. Bannon’s concern is that legal immigrants have the audacity to come to the US in order to better themselves with a college education and better our country by doing so.