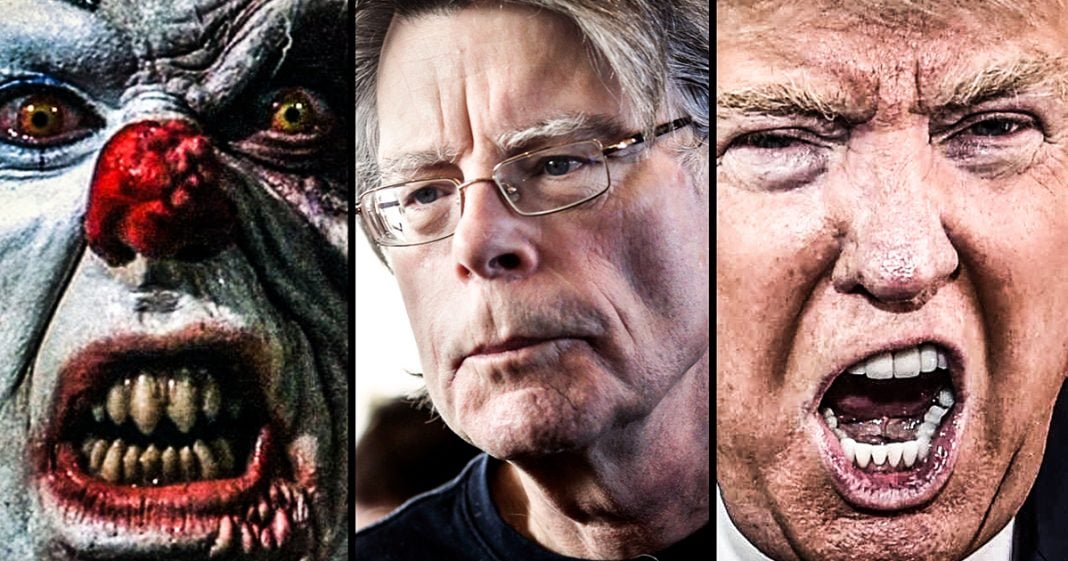 Horror novelist Stephen King has made no secret that he’s not a fan of Donald Trump, but his recent comments should give us all cause for concern.  The author claims that Donald Trump is more terrifying than any villain or monster he’s ever created. Ring of Fire’s Farron Cousins discusses this.

Horror novelist Stephen King came out this week and said that Donald Trump, president of the United States is worse than any story he has ever written. Basically Donald Trump is scarier than any villain or monster that one of the most prolific horror writers in the world could dream up. That’s coming from that horror writer himself.

Now Stephen King has made it clear that he is absolutely no fan of Donald Trump and he has been very critical of him since the beginning, but for him to come out and say that a guy like Donald Trump is scarier than that clown from It or from that car that kills people or from Thinner. Great movie by the way. That actually is really telling you something because Stephen King, I’m going to go ahead and side with. This is a guy that understands horror and terror.

Here’s the thing. Stephen King wasn’t just saying this to get attention. He wasn’t just saying it to make a joke. He was saying that the reason Donald Trump is so scary is because he really is a guy who clearly has narcissistic personality disorder, but more importantly he is a guy who has narcissistic personality disorder who also has the access to the US nuclear codes. If Donald Trump were to order a nuclear strike right now, anywhere in the world, no one can tell him no. That is what Stephen King is getting at here.

None of his villains have ever had that kind of power. None of them have ever had that kind of control over an entire government. Being able to wipe out millions, millions of people with the flip of a button. But Donald Trump does and that’s why this man is so scary. He’s so scary because we don’t know from one second to the next what his personality is going to be like. We don’t know how he’s going to respond to an overseas adversary saying something negative about him or him perceiving them saying something negative about him. That’s the problem with his narcissistic personality disorder.

You know Congress really needs to step in and do something about this. A man like Donald Trump or to be honest any person on this planet should not be able to unilaterally say launch the nuclear weapons. That is tyranny and I don’t care if it’s a Republican or a Democrat. It shouldn’t be the sole decision of one human being to drop the deadliest weapon ever made and yet Donald Trump has that power. Donald Trump the idiot man child who is running this country has the authority, the ability to kill millions of people if he just gets in the mood to do so. That’s why Stephen King is telling us that yes, I’ve written some great horror stories but nothing can compare with the horror of which the United States is going through today.