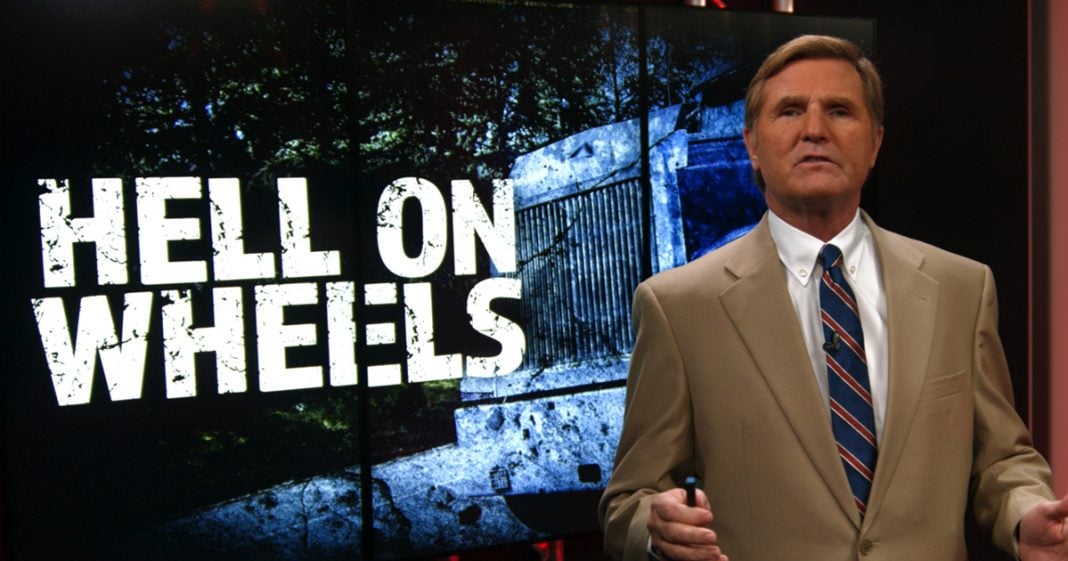 Nearly 4,000 Americans are killed every year in accidents involving 18-wheelers, but we only hear about these accidents if they happen to involve a celebrity. The stories that aren’t told are of families that have been killed by truck drivers. America’s Lawyer Mike Papantonio talks about how most of these accidents could have easily been avoided by simply paying attention to the laws.

Nearly 4,000 Americans are killed every year in accidents involving 18-wheelers, but we only hear about these accidents if they happen to involve a celebrity. The stories that aren’t told are of families that have been killed by truck drivers; children who have lost their parents or parents who lose their children. And the problem is that most of these accidents could have easily been avoided.

In addition to the 4,000 people killed every year, an average of about 100,000 thousand are seriously injured in accidents involving large trucks that often weigh more than 40 tons each. The number of accidents, deaths, and crippling injuries could be reduced if it weren’t for the strain that corporations put on these truck drivers.
According to the data, at least 13% of these trucking accidents are due to driver fatigue of all things. To put it simply, the drivers were simply too tired to function properly behind the wheel of a 40 ton vehicle that’s traveling down the highway at speeds of 80 miles per hour or more. And the reason that these drivers are fatigued is because they have nearly impossible deadlines to meet if they want to get paid.

The Federal Motor Carrier Safety Administration sets rules for how long truckers can drive in a day. Before drivers even start a shift, drivers have to take 10 consecutive hours off duty. Once they get behind the wheel, they can drive for no more than eight straight hours before stopping for at least 30 minutes. All told, within a period of a 14-hour shift only 11 hours can be spent behind the wheel. But of course the corporations that hire truck drivers want to make as much money as they possibly can, and the longer their goods stay on the highway, the longer it takes them to turn a profit.

What we’ve learned in the last few years is that many employers are encouraging drivers to work beyond the legally-set time limits, or to forgo their 10-hour restart period in exchange for financial rewards. For example, drivers may be offered bonuses if they deliver their loads in a shorter amount of time than projected, which encourages drivers to risk their lives and more importantly, risk the lives of everyone else on the roadway that they’re traveling.

On top of that, even drivers who take the legally-required hours off before beginning a shift can fall victim to driver fatigue. Due to the fact that many drivers are considered contractors and therefore not covered under a corporate insurance plan, disorders that cause disrupted sleep patterns often go undiagnosed, preventing drivers from giving their bodies the proper rest that they need. Every year horrible accidents are taking place on the highways, trucking accidents that can be prevented if we simply start paying attention to the laws.