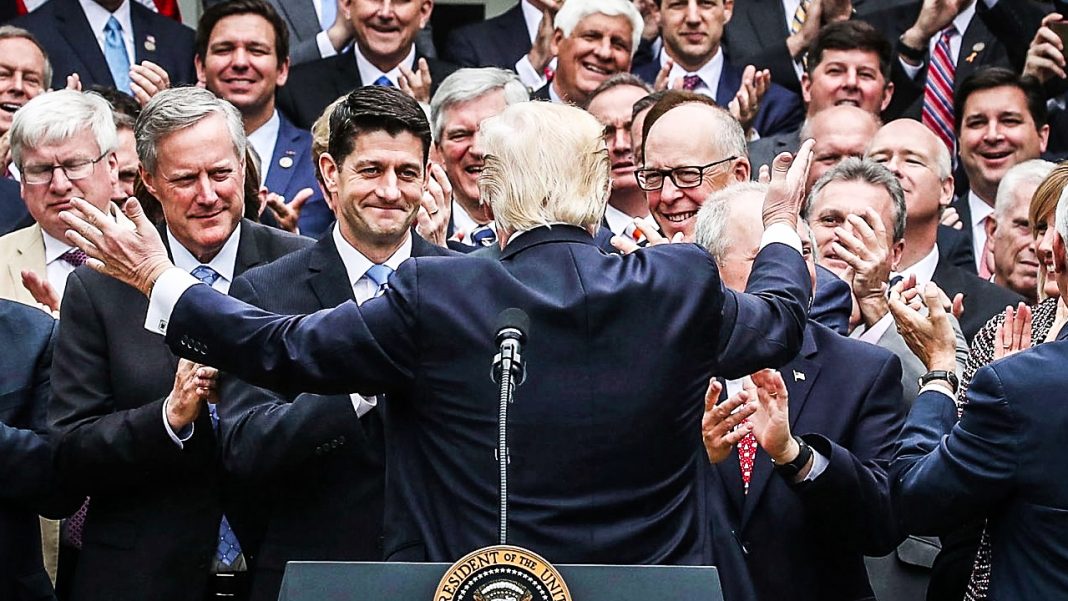 After they voted to kick as many as 24 million Americans off of their current healthcare plans, House Republicans celebrated with beers in the Capitol.  Apparently sentencing millions of people to die is a cause for celebration for Republicans. Ring of Fire’s Farron Cousins discusses this.

After voting yesterday, 217 to 213, to repeal the Affordable Care Act and replace it with the Republican replacement legislation, Republicans in the House of Representatives cracked open ice cold Bud Lights to celebrate the fact that they stripped as many as 24 million people of their health care coverage. Now, that’s not a euphemism. That’s actually true. A reporter, Alexandra Jaffe, took pictures of a cart being rolled into the Capital shortly before the health care vote that was filled with beer for the Republicans so that they could celebrate stripping millions of Americans of their health care coverage.

Now, I don’t know if this is common practice, if Republicans or Democrats or anyone typically roll in cases of alcohol to celebrate a vote, but of all things to celebrate, this isn’t one of them. Here is what some of the horror stories of what this piece of legislation that the House Republicans passed yesterday could do if approved by the Senate.

Pregnancy costs are going to be 425% higher under the Republican plan than they were under the Affordable Care Act. This thing currently has an 18% approval rating among these American public. So Republicans are celebrating basically ignoring 82% of the American public. It cuts Planned Parenthood. Rape and domestic violence are now considered preexisting conditions, so women who’ve gone through these horrific ordeals are now going to be part of that 5% that can get coverage.

This piece of legislation is a slap in the face to everyone low-income citizen in this country, to every woman in this country as being a woman now is a preexisting condition, and to anyone who’s ever been sick. I mean, Jason Chaffetz had to roll himself in there on one of those broken foot carts so that he could make this vote to strip other people of their ability to go have the same kind of foot surgery that this asshole just had. That’s what this is about. The only reason they did it was so that they could cut taxes for their wealthy donors.

Originally, it was to cut tax on 400 families in the United States, the 400 highest income earners, but because they added all of these other tax breaks to it, we’re now looking at the top 3.2% of income earners in the United States get a tax cut with this legislation. Again, that is all this was about. Their entire crusade to get rid of Obamacare was so that they could give themselves a tax break, because a lot of the Republicans in Congress actually qualify for it, and their wealthy donors.

Meanwhile, as many as 24 million Americans could lose their health care coverage. We could be looking at tens of thousands of new, preventable deaths every single year just because Republicans wanted to give rich people a little bit more money. Not even that much money. That’s what’s so disgusting about it. But what’s even more disgusting is that Republicans aren’t even trying to hide their disdain for the American public anymore. 18% of the public wanted this. Most Republicans who voted for it had not read it. We haven’t even gotten a CBO score on this thing yet. Yet, they did it anyway because they’re so desperate to cut taxes for the wealthy elite that they’re willing to give these Americans, who need this coverage, a death sentence.

The House Republicans yesterday essentially became the death panel that Sarah Palin warned us about. It happened. But it was Republicans, not the Democrats. People are going to die now. That’s not an overstatement. That’s what all the analyses tell us. People will die by losing this health insurance coverage. And Republicans don’t care, as long as they’re able to give their wealthy donors just a few more dollars every year.