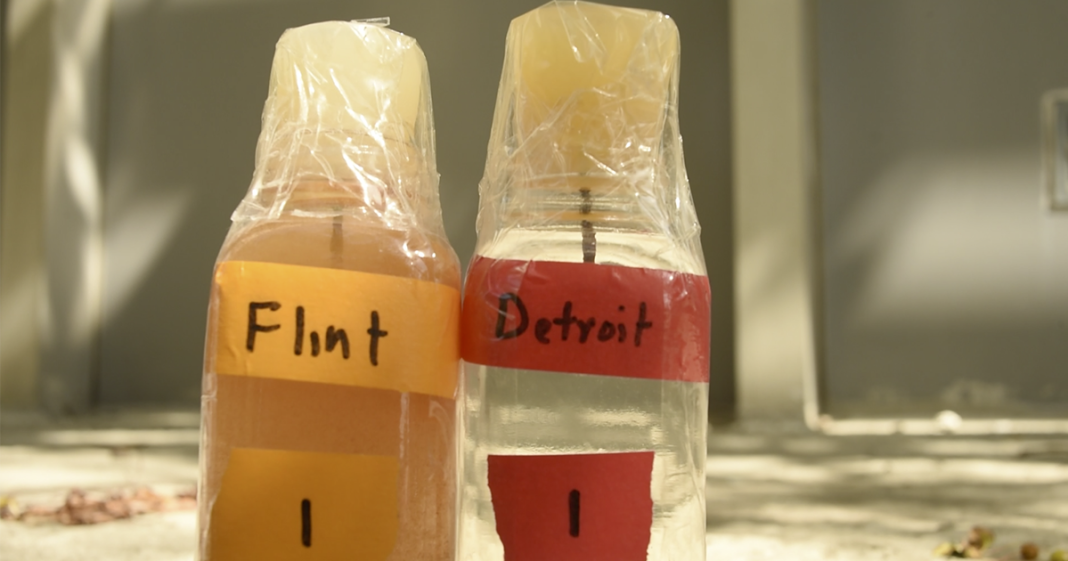 Residents in Flint, Michigan received an unwelcome surprise recently when the city hit them with eviction notices over unpaid water bills.  In total, about 8,000 residents are now facing eviction from their homes because they refused to pay for the dirty, contaminated water that the city was feeding them. Ring of Fire’s Farron Cousins discusses this.

As if things in the city of Flint, Michigan, aren’t bad enough for the residents there, apparently 8,000 people in the city of Flint, Michigan, were recently hit with eviction notices because they refuse to pay for the contaminated water that the city is sending them through the pipes. Now, make no mistake. Things in Flint, Michigan, have not gotten better. These people still do not have access to clean water. I know the media is not talking about it anymore but that doesn’t mean the problem has gone away. If anything, the problem is just as bad today as it was when we first discovered it. People are still having to buy bottled water to cook, to bathe, to make bottles for their children so they don’t feed them lead contaminated water that’s still being fed to them.

So, these people, obviously they can’t use this water or if they do they understand that they’re poisoning themselves and their children, so they refuse to pay their water bills. Up until February, the city had actually been subsidizing low income people to pay these water bills for water that they can’t use. But again, in February those payments stopped, so people refused to pay their bills or they couldn’t pay their bills or they didn’t feel like they should have to because the city was poisoning them.

So the city responds by sending 8,000 low income families eviction notices. So not only do you have to pay for this dirty, contaminated water that you can’t drink, but now you’re facing the risk of being homeless. The city has given these people until February of 2018 to pay these bills or face eviction, but this is still a disgusting story, mainly because the city is poisoning them with lead contaminated water.

There’s no telling how many people in the city of Flint have already been contaminated with this and basically had the rest of their lives ruined because of it. We also know that this contaminated water has killed at least 12 people in Flint, Michigan, from Legionnaire’s disease. But the city still wants their money, right? I mean, the amount of money they paid the emergency manager to come in and figure out how to save money by feeding these people dirty water, they could have taken the money they paid this guy, the guy that the Republicans hired to do this, and actually provided enough filters to clean the water for every resident in Flint, Michigan. Problem solved. But they were so desperate to allegedly save money, that they were willing to pay one of their buddies, one of their campaign donors, to come in and tell them how much better it would be to go ahead and poison this town that most people in this country have never heard of. And now we’re sticking them with the bill for it, too.

8,000 people could be homeless next year because they don’t want to pay for the poison water that the city of Flint, Michigan, and Michigan Governor Rick Snyder is continuing to send to their homes on a daily basis while those Republicans in charge refuse to do anything, anything at all, to help these people finally get clean drinking water. This is the United States in 2017. I mean, for the love of God, back in the ’70s and ’80s, people thought we’d have flying cars by now, and yet we don’t even have clean water for millions of people in the United States.

Not just Flint Michigan. Los Angeles. Over 3,000 areas across the United States have higher levels of lead contamination than Flint, Michigan. We can’t even fix those problems. We can’t fix the fact that we’re poisoning entire generations just because we can’t afford to replace the pipes. Or, more importantly, because we don’t want to spend the money to afford new water infrastructure. We have the money. We’re just giving it to the military instead, because God knows there’s somebody overseas that needs to be bombed every single day. Forget the fact that our citizens are drinking poisoned water. We’ve got to give that money to the military. We’ve got to bomb some people. We’ve gotta go kill people over there, and turn a blind eye to the fact that we are killing people and ruining their lives because we’re not even willing to give them clean water.

Paraquat Labeled As Deadliest Weedkiller To Humans On The Planet