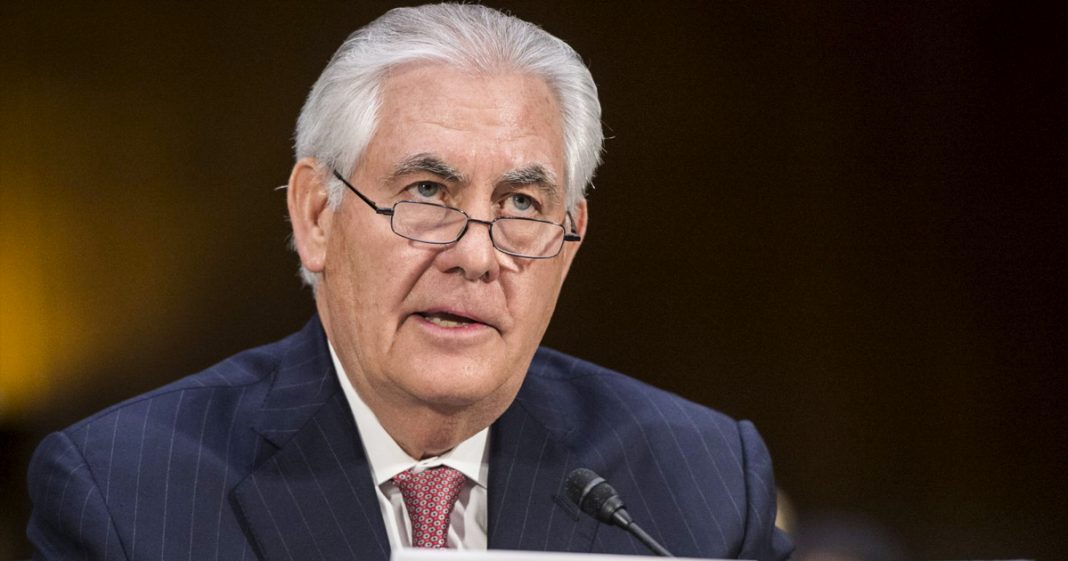 Rex Tillerson, the former fossil fuel CEO who is now our Secretary of State, says that if the U.S. focuses on human rights issues abroad, it could hurt our interests in those countries.  What he really means is that we have to keep our mouths shut about these abuses so American corporations can continue to exploit their natural resources. Ring of Fire’s Farron Cousins discusses this.

Rex Tillerson, the former CEO of Exxon turned Secretary of State for some reason, said earlier this week that it cannot be the job of the United States to worry about all of the human rights abuses taking place in countries all over the world. The reason he tells us is because if we’re just going around focusing on human rights issues, who’s going to worry about our national security? More importantly, who’s going to worry about our economic security? After all, if we go to another country and say, “You can’t treat your own people like this, they may not want to trade with the United States. They may not let United States businesses come in there and do business. We could lose money.” Yeah, we kind of have to let our American morals and American values go on the backseat in favor of these economic interests.

Now, he did clarify and said, “Once we get those economic interest secured, maybe then we start talking about American morals and American values.” Now, I don’t know about Rex Tillerson, I don’t know what his values are. I’m pretty sure he has none and has no morals. I do know that the belief that you shouldn’t kill someone simply for being gay, not an American value, that’s just basic human decency. Yet, that’s what’s happening right now in Chechnya. In fact, a story just came out that said the Chechnya government is letting families know if you have a gay family member, you need to go ahead and kill them or else we’re going to do that for you. That is what’s happening in Chechnya in 2017. They’re killing people for nothing more than being gay.

Down in the Philippines, Duterte, a guy that Donald Trump seems to love, they’re killing poor people. 7,000 low-income Philippine citizens have been slaughtered in a phony war on drugs, where there’s absolutely no evidence to suggest that any of these people that were murdered were involved in a drug trade. Yet, they use that as an excuse to murder them. Go over to the Middle East. Holy hell, that is the worst place in the world for women to be. Recently, Saudi Arabia censored German Chancellor Angela Merkel’s hair, when she was shown on national TV. Saudi Arabia was just put on the Women’s Right Council in the United Nations.

I get what you’re saying Rex Tillerson. I know you’re a business guy and all you care about in the world is money. Same thing with Donald Trump. Human rights be damned, right? We got to make money. We can’t say that Saudi Arabia is one of the worst human rights abusers in the world, even though they’re consistently rated as such, because we need their oil and Rex Tillerson’s from Exxon. He’s an oil guy, and so he wants the oil. Everybody, I hope to God that you put those two together. Rex Tillerson is not out there advancing the United States in any way. He’s not out there trying to make other countries get better or to treat human beings, God forbid, like human beings. He’s out there closing deals for Exxon. Don’t you think that he is doing anything else. He’s closing deals for other American businesses, and that’s what Donald Trump is doing.