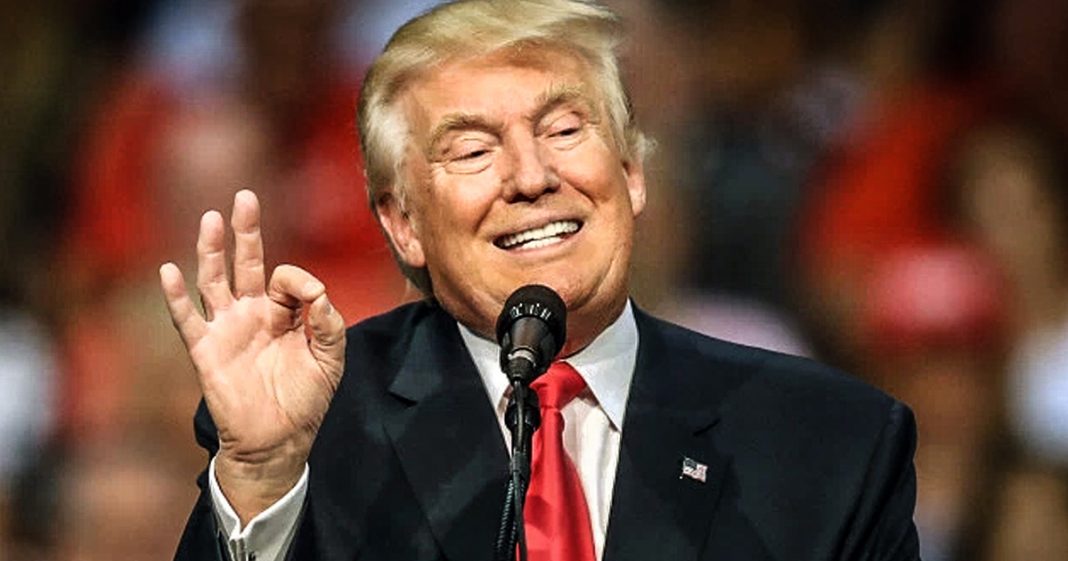 Donald Trump is furious about the recently-struck budget deal, where all of his pet projects were left off the table and the programs he wanted to cut actually received more money, so he’s open to the idea of shutting down the entire federal government until he gets his way. Ring of Fire’s Farron Cousins discusses this.

Donald Trump has finally reached peak. I’m going to take my ball and go home if I don’t get my way. This past Sunday, Congress finally comes to a deal on the budget. They finalize it. They’re like, “Yup, this is what we’re gonna do.” Doesn’t include any funding for Trump’s border wall, still funds Planned Parenthood, which the Republicans wanted to get rid of, including Donald Trump. More money for the National Institute of Health, which Republicans and Donald Trump said they were going to all but do away with it. Money for science. Less money for Republican initiatives, more money for Democratic initiatives. Overall, pretty big win for the Democratic Party. Donald Trump is pissed off about it, so pissed off that he wants the Senate to rewrite their rules to get rid of the filibuster altogether, and change the rules so that you don’t need 60 members to pass a bill, you just need 51% of those present to pass a bill.

This is not the first time that Donald Trump has attempt to, or suggested, or hinted at the fact that he wants to rewrite the rules by which Congress has always played, or by which the United States has always played. It’s starting to get a little bit more frightening each time, because every time he suggests it, when his administration says, “We’re considering changing libel laws so that we can sue journalists,” effectively doing away with the First Amendment, when they say that we want to get rid of the filibuster, when we say that we want to get rid of the number of votes you need to pass a piece of legislation, those are harmful to American democracy, especially considering the reasoning. It’s not because the Democrats or the Republicans in Congress are being irrational. It’s because Donald Trump is a child. He is a five-year-old child who somehow … I don’t know if it was through a genie or a magic teller machine like in the movie Big, but he ended up in a big boy’s body.

Now that he’s not getting his way, he’s going to take his Congress and go home. If you’re not going to be nice, I’m not going to play your game, and I’m going to change the rules so that I always win, and you’re the bad guy. I’m not kidding you. This is what children do. I remember. I was a kid once. Some kids are like that. Those are the kids nobody wants to play with, and that’s what Donald Trump is right now, a child that nobody wants to play with because he’s the kid that always has to win, or else he’ll kick over the Monopoly board, stomp all over it, and tell you that you cheated. This isn’t how American democracy works. This isn’t how our government works, but unfortunately it’s how we’re being forced to work under Donald Trump, and the greatest irony of all is that this budget plan that Donald Trump has gone back and forth on and at times said it’s a big win, has so many, so many liberal gifts, and so few Republican gifts, and it managed to make it through a Republican-controlled Congress.

I think maybe that party, including everyone except Donald Trump, might actually be starting to listen to the American public. Donald Trump can get pissy all he wants. The fact of the matter is that a lot of this budget will help the United States. Not all of it. There’s some bad things in there, but let’s take a minute to appreciate the fact that this thing could have and should have been much worse if Donald Trump had actually gotten his way.