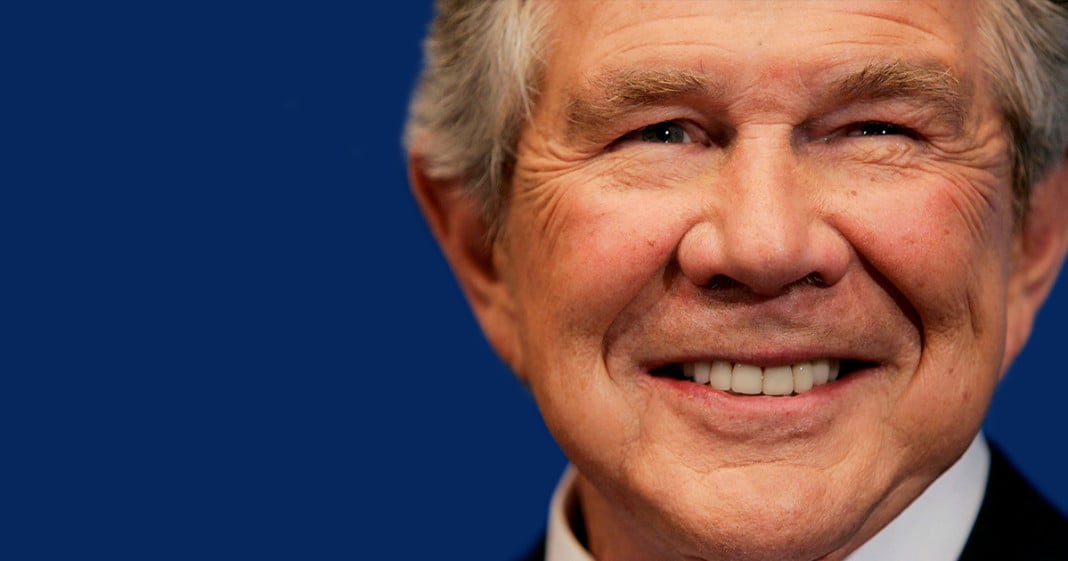 People in their 30s and 40s today probably remember the outrage among evangelicals and conservative Christians over then-President Bill Clinton’s “sexcapades” in the late 1990s. In September of 1998, the Right Reverend Pat Robertson went on a self-righteous rant, declaring that Clinton had “debauched, debased and defamed” the office of the Presidency, turning the White House into a “playpen for the sexual freedom of the poster child of the 1960s.”

Less than two decades later, the U.S. has a president whose sexual morals and attitudes toward women make Bill Clinton look like the most noble, chaste, and chivalrous Sir Galahad of Arthurian legend. Trump is not only a compulsive liar, a serial adulterer and womanizer who has appeared on the cover of Playboy magazine, he has actually bragged about his sexual assaults on women. And yet, at an event held at Regent University in February of last year, Pat Robertson said, “You inspire us all.”

Last week, The Ring of Fire brought you a story about the bizarre relationship between Trump and Christian Evangelicals, and how some evangelical leaders are rationalizing their support for a psychopath who is the very antithesis of the Christian values they claim to hold. Some, like Franklin Graham, compare Trump to “flawed leaders” such as adulterer King David (who, as you may recall, had one of his loyal officers killed in order to cover up the fact that he’d impregnated the man’s wife), or “wicked men” such as King Nebuchadnezzar, who they claim God uses to advance His agenda.

Therein lies another clue to evangelicals’ mysterious and blatantly hypocritical support of Trump. It has to do with a phenomenon known as “immanitizing the eschaton,” or bringing on the End Times.

Expectations of the End Times and looking for the Second Coming of Christ has been part of Christianity for almost 2000 years. However, over the centuries, the majority of Christians who are more rational and moderate in their beliefs have largely abandoned this idea, focusing on the problems and injustices of the times in which they live. However, the Evangelical wing of Christianity, which shares a number of unfortunate characteristics with jihadist Muslim fundamentalism, has continued to focus on and anticipate those End Times.

Recent societal shifts have reinforced this eschatological thinking. For example, in his recent work, The End of White Christian America, author Robert P. Jones points out that for the first time in history, white Christians are a minority in the U.S. Furthermore, over the past half-century they have been seeing increasing acceptance and support for same-sex marriage and LGBT rights and protections, abortion, legal contraception, civil rights, gender equality – all of which fly in the face of their system of values and beliefs. There are other, more sinister signs as well, which are covered in various places in the New Testament. For example, in II Timothy 3: 2-3, it says:

“For men will be lovers of self, lovers of money, boastful, arrogant, revilers, disobedient to parents, ungrateful, unholy,unloving, irreconcilable, malicious gossips, without self-control, brutal, haters of good, treacherous, reckless, conceited, lovers of pleasure rather than lovers of God.”

This all may seem like self-fulfilling prophecy, and in many ways, it is. As they become increasingly irrelevant, evangelicals appear to be grasping at any straws that might give them and their narrow Calvinistic worldview some kind of meaning. Many are doubtless looking hopefully to the skies for Jesus. If a leader like Trump can help to make that event come sooner, so much the better.

Aside from the fact that evangelicals like this need to consult their own scriptures on this matter (such as Matthew 24:36), there are a number of evangelical leaders who are coming to realized that in supporting Trump and his kind, evangelical Christians have sold their souls to the Devil. They have lost all credibility, making themselves even more irrelevant than before.

Evangelical and fundamentalist Christianity is now at a crossroads. They may still be able to regain political credibility based on “moral values,” but they will have to renounce Trump and those like him in order to do so. They will also need to re-examine exactly what those “moral values” are. Does morality mean doing as the Rabbi of Nazareth taught, caring for the least among us, demonstrating tolerance and acceptance and promoting peace and harmony – or will it continue to be all about policing people’s personal sexual behavior?

If they choose the latter, it is certain that evangelical Christianity as a political force will go the way of the dinosaurs – which may not be a bad thing.