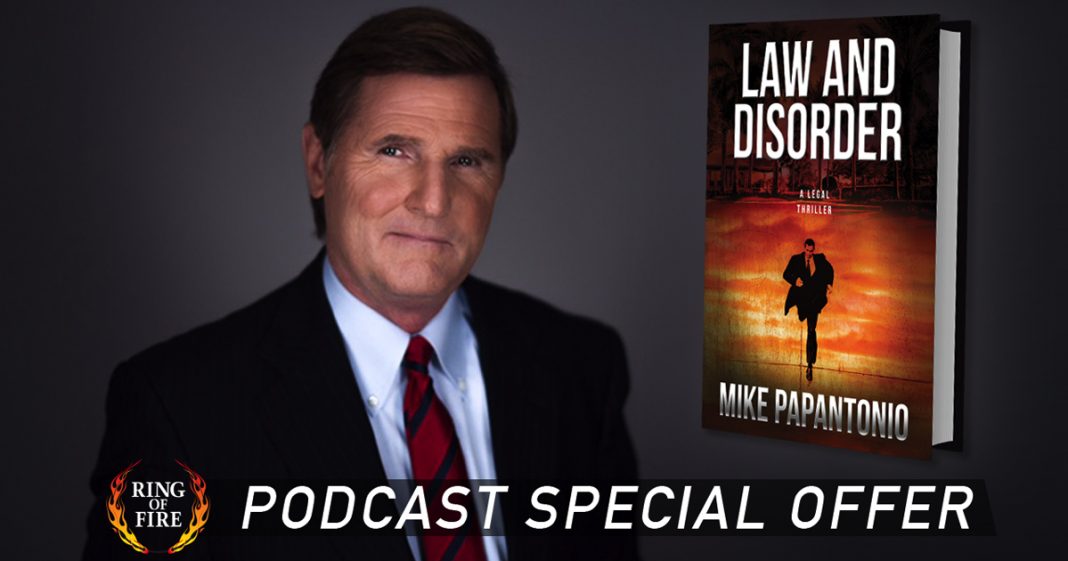 Members get our full 3 hour radio show commercial free! Plus you’ll receive bonus content up to 2 extra hours a week.

Sam: Pap, first off, let me just thank you, and also I guess to make the announcement that you are, and I guess, we are offering a copy of your latest book, Law and Disorder, for any new member of our podcast. People can sign up, of course, at rofpodcast.com. You sign up for the podcast, and we will send you an email that will get you your free copy of Law and Disorder. Just do me a favor, remind people of what Law and Disorder is about. Just in terms of the plot.

Papantonio: I think people following Ring of Fire are certainly going to be able to connect real well with Law and Disorder. I think the reason Law and Disorder is selling so well is because it talks about corporate stories that corporate media, they’re not allowed to talk about. I mean their advertisers don’t let them. The reason you don’t see stories about pharmaceutical companies killing people, which happens every day in this country. The reason you don’t see those kinds of stories or you don’t see DuPont stories where they’re polluting an entire ecosystem, like the case I just finished handling. You don’t see those stories in corporate media. We talk about them of course on Ring of Fire …

Papantonio: This book, this is a fiction that’s based on true stories. I think that’s the reason the book is selling so well. I think people, they’re seeing a part of the practice of law that they just aren’t used to seeing because it’s real. I mean there are real courtroom scenes, real deposition scenes, real companies doing really bad things.

Sam: I’ve got to say, I’m a little biased, I think. For me, the part that has really fascinated me about the type of law that you practice and next week we’re going to Mass Torts Made Perfect in Vegas. We’re going to be doing at least part of the show from there. I do the Majority Report from there. The reason why people, I think, really enjoy those shows is because this world of tort law, of lawyers who do the work that you do, I don’t think people fully understand just how important it is to protecting citizens, consumers, protecting workers and particularly in an era where you have this massive deregulation by a guy like Donald Trump, what you do becomes that much more important. I think people are fascinated by these stories.

The thing I loved about Law and Disorder and also I want to talk about just briefly, the next episode of the trilogy, but the thing I love about it is, it’s so hard for me as just a feeling, empathetic person to understand how corporations can do these things that I think it’s very hard for people to imagine people can make these decisions. To see the patchwork of decisions that are made that provide for these outcomes, I find really fascinating. Tell us about Law and Vengeance because this is part two, right, of the trilogy.

Papantonio: Law and Vengeance takes up where Law and Disorder left off with the character named Gina Romano. She’s just a hugely talented criminal defense lawyer who handles cases all over the country, mostly the big cases. She’s put in a situation to where she has to handle a whistleblower case where a defense contractor has sold to the American taxpayer a gun sight that’s defective. This, by the way, is a true story too. The gun sight is defective to the point to where every 50 yards, the gun sight is called a hologram gun sight, it actually is off three degrees at 50 yards. That gives you an idea how inaccurate it is. It’s off because of humidity. It’s off because of temperature changes. We actually handled that case.

What I’ve done is just made it into a fiction that tells the story. A lot of the story is true, but it’s been fictionalized from the standpoint of adding some adventure to it that I think readers will really appreciate. I think they’ll appreciate Gina Romano. It’s very difficult. People don’t get that in the practice of law, it’s just as difficult for a woman to move to the top of the game. You’d like to think that lawyers, that they’ve overcome that, but there’s still a terrible, terrible glass ceiling out there for female trial lawyers. Gina overcomes that. Gina’s put in the fight of her life against one of the biggest weapons contractors in the country after one of her partners is murdered, the partner who happens to be handling that case initially.

The same characters are back. Nicholas Deketomis, who is the lead character in Law and Disorder. Some of those same characters are back. They’re helping further this fight against this huge weapons’ contractor that simply has control of the media, has control of government, has control of, from the standpoint of, it certainly has the upper hand financially, which is the real world of what I do. It’s very few cases I handle where you don’t have a company that is multi-billion dollar company and where it is always a David and Goliath in the truest sense. In this series of books though, the David, it’s a little bigger than the typical David. This is already a hugely successful law firm.

Nicholas Deketomis is an attorney who’s been taking on the big corporations, everything from tobacco to the biggest pharmaceutical industry and has won enough cases to where they can actually go toe-to-toe with some of the biggest corporations on the globe. That’s where this book picks up. I think the reason I wanted to give it away to our audience because they know these stories. They hear these stories. I think all they have to do is go to Amazon and read the reviews. They’ll see it’s a strong book.

Papantonio: I wanted to do that for people who buy the podcast.

Sam: Well, I think I have been really hopeful that people really begin to appreciate the kind of work that you guys do. Let me ask one more question of it. In the course of writing the book, when you’re looking at it from a somewhat arm’s length in fictionalizing these things, but obviously a lot of this comes from your lived experience. Have you gained any insights into just lawyering in general by reflecting upon it in this way?

Papantonio: Well, it does. Every page you write, you have to keep in mind an overall strategy. You’ve heard the concept of “Show me, don’t tell me” when you’re writing. A good fiction should be more show me than it is tell me. With that in mind, everything, every chapter that you’re writing, you’re building on this strategy that you might have actually used in trial, and you’re thinking as you’re writing the book, ‘Well, gee. I guess I could’ve done this. Next time I think I’ll do this.’

Papantonio: It’s that “Show me, don’t tell me” notion about how to write a book that takes you there.