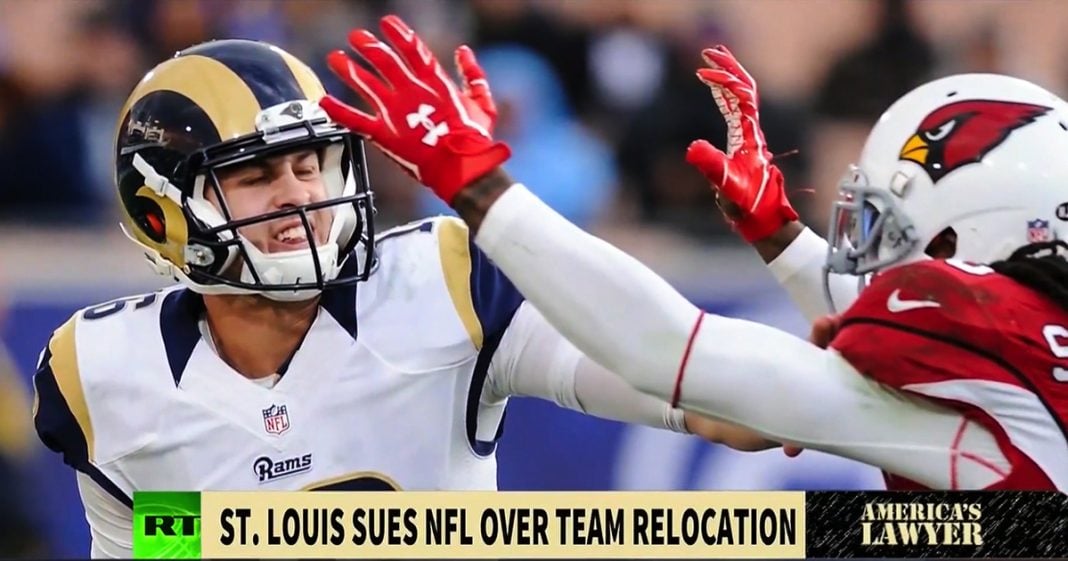 Via America’s Lawyer: Mike Papantonio is joined by Mollye Barrows, Legal Journalist for The Trial Lawyer Magazine, to discuss a lawsuit filed by the city of St. Louis against the NFL for relocating the city’s football team and leaving taxpayers to pay off the debt on the stadium.

Papantonio: The last few years have seen a rash of professional football teams relocate to different cities, leaving behind many angry fans and taxpayers. Well now the city of St. Louis is taking the NFL to court for allowing the Rams’ football team to move to Los Angeles after forcing taxpayers to pay for the team’s stadium back in 1995. Joining me now to talk about this lawsuit and how the NFL has fleeced taxpayers for years is Mollye Barrows, legal journalist with the Trial Lawyer magazine. Mollye, these taxpayers have got to be furious.

Mollye: I know, and who can blame them? The more I looked into this Mike I thought the NFL is nobody that you want to tangle with because they want it all for themselves and you sort of get what’s leftover. It looks like in this case it’s a big bunch of bills.

Papantonio: Okay, so right now the taxpayers go and they build this huge stadium, they build the entire infrastructure-

Papantonio: For this, it’s not just one stadium we’re talking about.

Papantonio: So they build the infrastructure and then all of a sudden the Rams say, ‘Well gee whiz, we’re going to leave now.’ The only recourse is to say to the Rams, ‘Well you can leave but we want our money back.’, isn’t that where this is headed?

Mollye: That’s exactly where it’s going because they basically said that, ‘The Rams and the owner Kroenke misled them about their intensions, that they violated the NFL’s own relocation protocols.’ and essentially they want the money that the Rams made off the relocation and they want money made from what they were going to lose essentially in revenues because the Rams left. So that’s what the lawsuit is saying, ‘You guys weren’t honest, you knew you were going to move and as a result we were in the process of trying to build you a new stadium, not to mention we’re still paying off the old one that we built for you in 1995 and here you want to up and move on us and we want our money.’

Papantonio: Well the good thing, what I love about this lawsuit is you always see these unbalanced financial deals.

Papantonio: Whether they’re building in Miami or wherever they’re going, you see these franchisees hustling taxpayers in basically the same way they hustle their players so many times.

Papantonio: So this unbalanced financial agreement that we see, take in cities like St. Louis, really the only way to solve it is through money and say, ‘Gee, well you can do this but it’s going to cost you a lot of money.’ Isn’t that how you see it?

Mollye: Yes, and it’s so interesting because apparently stadiums are becoming more and more outdated quicker. So this stadium that was built in 1995, worth almost $300,000,000, now it’s outdated so St. Louis was saying, ‘Hey we’ll build you a whole new stadium and by the way, we’re going to use public funds to do it.’, when half the time the NFL and their owners can afford to build their own stadium. Well, these new stadiums, not only are they expensive, but they can make the teams and the owners can make more money off of them because they’re fancier and dancier and offer box seats and this, that and the other. So essentially, I think they feel like Kroenke bought this property in California with the intention of building a brand new stadium there. They tried to compete with that, they couldn’t do it and now they’re saying, ‘Hey, you left us holding the bag knowing good and well, you let us spend more money to look at maybe building you a new stadium.’ But that’s the precedent for cities all over the country.

The NFL comes in, says, ‘We would love to have a stadium in your city and we would love for you to pay for it because hey, it’s going to bring you all this economic revenue, it’s going to bring you jobs.’ But economists and particularly this one Roger Noll at Stanford University says, ‘Hey, no way, that’s not what’s happening at all, that these cities are having to bear bigger financial burden and it’s not a good investment.’

Papantonio: Yeah, it doesn’t sound like an investment and of course they’re going to go city to city, this story is going to be told everywhere. I think it makes it very difficult for them going forward to try to build out in other places.

Mollye: It’ll be interesting to see how this lawsuit comes out. Kroenke may be more vulnerable than the NFL themselves, so we’ll see.

Papantonio: Yeah, thank you for joining me.