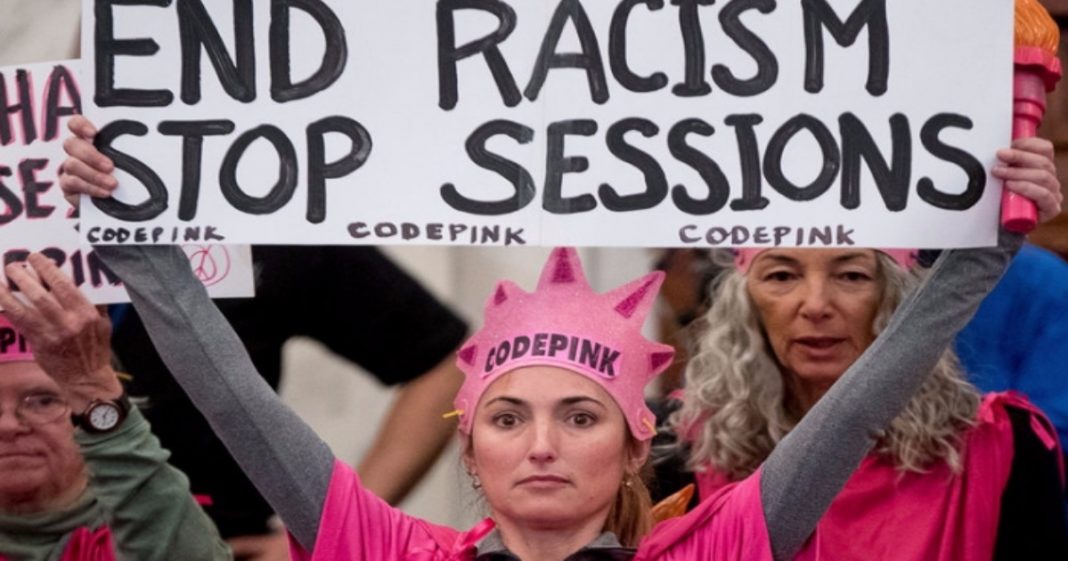 A Code Pink activist has been found guilty of disorderly conduct and one other charge related to her behavior during the Senate confirmation hearing of Jeff Sessions, a disturbing charge that seems to infringe on freedom of speech and reasonable treatment of activists.

Desiree A. Fairooz was present, along with several other activists, at the official confirmation hearing for the current Attorney General. Dressed as Lady Liberty all in pink and carrying a sign, 61-year-old Fairooz and her fellow activists wanted to express their displeasure at the confirmation of Session, but they never intended to cause a disturbance.

During the proceedings, Fairooz laughed briefly, a quiet, unplanned outburst. When she was approached by Capitol police, she expected to be reprimanded, but was instead taken into custody.

She, along with two other activists, were charged for their presence and rather than accepting a plea deal, chose to take the matter to trial. Fairooz was found guilty of disorderly conduct and “parading or demonstrating on Capitol grounds.”

Fairooz said that neither she nor the other activists present intended to disturb the official proceedings.

“None of us planned to get arrested. We just wanted to be a visible symbol of dissent.”

Fairooz argued that her outburst, however minor, was not intended to disturb the proceedings or impede the system. Her outburst came with a Republican lawmaker argued that Sessions had a “clear and well-documented” history of treating all Americans equally.

“I just couldn’t hold it. It was spontaneous. It was an immediate rejection of what I considered an outright lie or pure ignorance.”

In fact, Fairooz’s skeptical laughter is warranted. As Coretta Scott King noted more than two decades ago, Sessions has made a career of suppressing Black Americans. In the 1980s, Sessions was considered too prejudiced to be made a federal judge under Conservative leadership.

Still, now Ms. Fairooz must appeal the decisions by the courts and face further time and money lost for daring to laugh at the Attorney General. Is this really what our courts should be spending their time on? How can a momentary burst of sound be enough to put a woman in jail for as much as a year?

What this appears to be rather than a punishment for “disorderly conduct,” is a targeted attack on protest against Sessions or anyone else he might seek to protect. Ms. Fairooz was merely expressing her political opinion in an unobtrusive manner. Any punishment she faces is equally faced by the first amendment for all Americans.