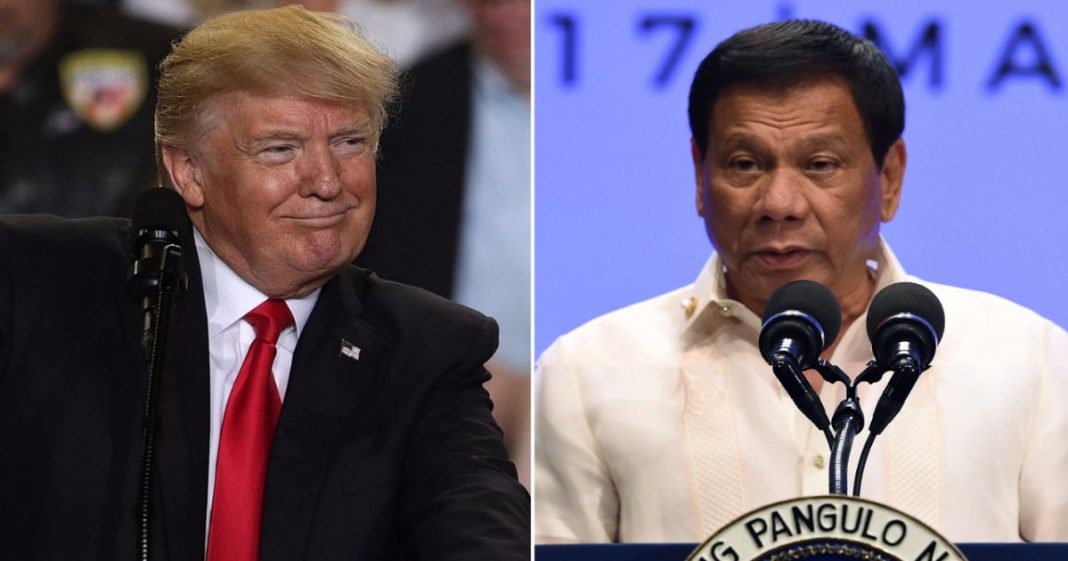 Over the weekend, Trump had a “very friendly conversation” over the phone with murderer and human rights abuser Rodrigo Duterte, president of the Philippines. During that conversation, the POTUS extended an invitation to visit the White House without so much as a word to either the State Department or the National Security Council, as is normal procedure.

Even though Duterte apparently has a ‘hair appointment‘ that day and may have to give it a miss, the invitation stunned human rights advocates and Trump’s critics as well as members of his Administration. In the face of public criticism, Donnie-boy is claiming that it is part of a “diplomatic outreach” to leaders in Southeast Asian countries.

If you believe that, we have a bridge in Brooklyn to sell you real cheap. The real reason for Trump’s friendly overtures to a tyrant who is responsible for the murder of 7,000 of his own people and has bragged about carrying out killings personally is one that should come as no surprise: it’s all about the money. Specifically, Trump’s business interests, from which he has refused to separate himself in defiance of precedent.

It turns out that one of Trump’s business partners is Jose E.B. Antonio, a Filipino real estate developer and one of the wealthiest people in the Philippines. Recently, Antonio opened a $150 million, 57-story luxury hotel in Manila’s Mataki neighborhood, the city’s equivalent to Wall Street. The Trump organization licenses its brand on that building, enabling the involved parties to make a whole lot of money with very little risk and virtually no real work.

A month prior to Trump’s election, Duterte quietly appointed Antonio “special envoy” to the U.S.

The Trump Administration is clearly becoming the most corrupt political “machine” since the days of “Boss” Tweed – but at least the Tammany Hall organization ostensibly worked on behalf of a disenfranchised minority (Irish Catholics). Trump’s machine works on behalf of no-one and nobody but Trump himself and his cronies.

Despite all his talk of turning his business interests over to his over-privileged children, Trump continues to receive business reports, visits his properties regularly (on the U.S. taxpayer’s dime), and can take money out of the business any time he likes.

Not only is Trump willing to maintain his business and his lavish lifestyle at our expense, he is completely fine with cozying up to murderous psychopaths in order to protect and advance his personal interests.