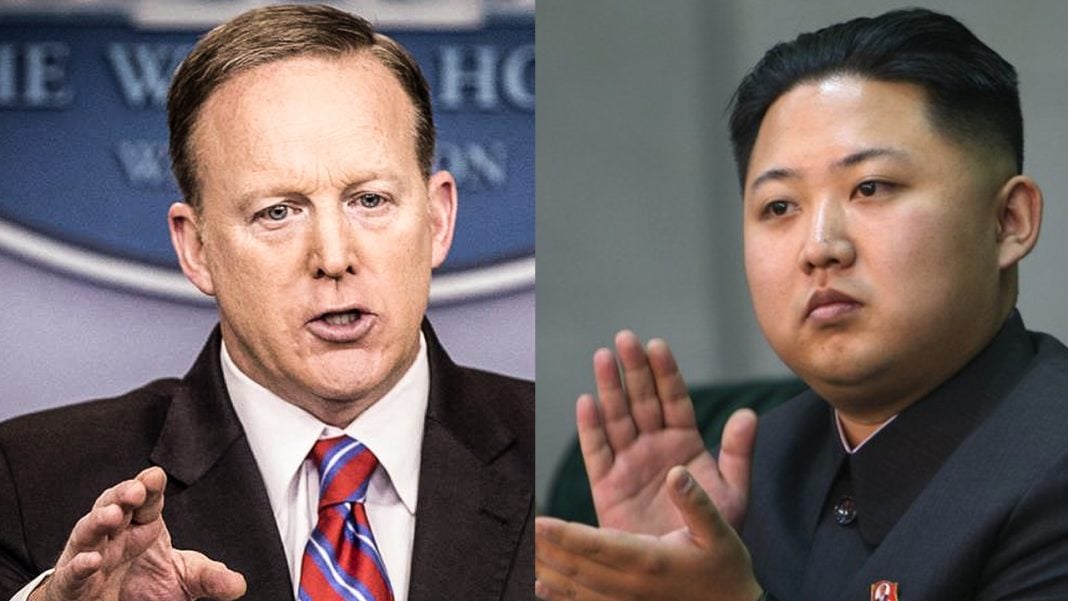 White House Press Secretary Sean Spicer has once again found himself in a bizarre situation where he defended a brutal dictator.  During a press conference this week, he told the press that Kim Jong-un managed to lead the country of North Korea “forward” at a very young age, implying that the country is making progress in some areas. Ring of Fire’s Farron Cousins discusses this.

During Monday’s White House press briefing, Sean Spicer was asked by a reporter from ABC about Donald Trump’s saying that he would be willing to meet with North Korean dictator Kim Jong-un, to which Sean Spicer went in this bizarre, rambling defense of Trump’s decision, saying that, “Look, Kim Jong-un led the country of North Korea forward at a very young age. He has accomplished a lot for a man so young, and he is leading this country, so yes, it would make sense for Donald Trump to meet with him.” Now, hold up there, Spicey. There’s a lot of things to talk about here. First of all, Kim Jong-un is a dictator. He is making 99% of the population of North Korea, those that live outside of Pyongyang, live in absolute hell. These people have no access to internet, most of the time no access to electricity, no access to basic necessities of life. Any dissent is punished severely.

People get disappeared from their homes every single day, never to be seen again, and Sean Spicer says that, “Yeah, Donald Trump would meet with this guy.” Now, could you imagine what would happen if Barack Obama came out and said, “I’d like to meet with Kim Jong-un”? The Republicans would have had a field day. They would have been running specials all day on Fox News telling us how horrible the situation is in North Korea, and why we need to go in there with bombs instead of diplomatic presence, I guess. Now, I’m not saying we need to bomb them. I’m not saying we need to attack them or invade them, but I am saying there is no good that will come out of a meeting between Donald Trump and Kim Jong-un. Kim Jong-un needs to be removed from power, and the power of North Korea needs to be given back to the people who are living in these dismal conditions under a brutal dictator, and for Spicer to suggest that it’s perfectly natural for Trump to want to meet with him, but furthermore, that this kid has led this country forward?

I have to ask, in what regard? How have they gone forward? People in that country are terrified to say any negative thing not just about Jong-un, but Kim Jong-il, any leader that North Korea has ever had. They worship these people, or at least are forced to worship these people, as if they are Jesus and Santa Claus rolled into one. That’s not normal. That’s not acceptable, and that is not behavior that the United States needs to turn a blind eye to and say, “Yeah, we’ll meet up. Maybe we’ll have a coffee.” Sean Spicer, I am sorry, he is the dumbest person in the Trump administration, and that is saying a lot, because don’t forget, this is an administration that includes people like Kellyanne Conway and, of course, Donald Trump himself. But Sean Spicer has no idea what he’s doing, and every day he goes out there, he is just creating more problems for Donald Trump to deal with.

Now, I don’t feel bad for Donald Trump. He absolutely deserves this, but at some point, Sean Spicer is going to have a mental breakdown on air and will have to be carted out of that room on a gurney. So Sean, for your own sake, for the sake of everybody in this country, please step down and let somebody who has a little bit more poise, a little bit more tact, take over for you, because you are causing so much damage, and the worst part? I don’t even think you realize it.