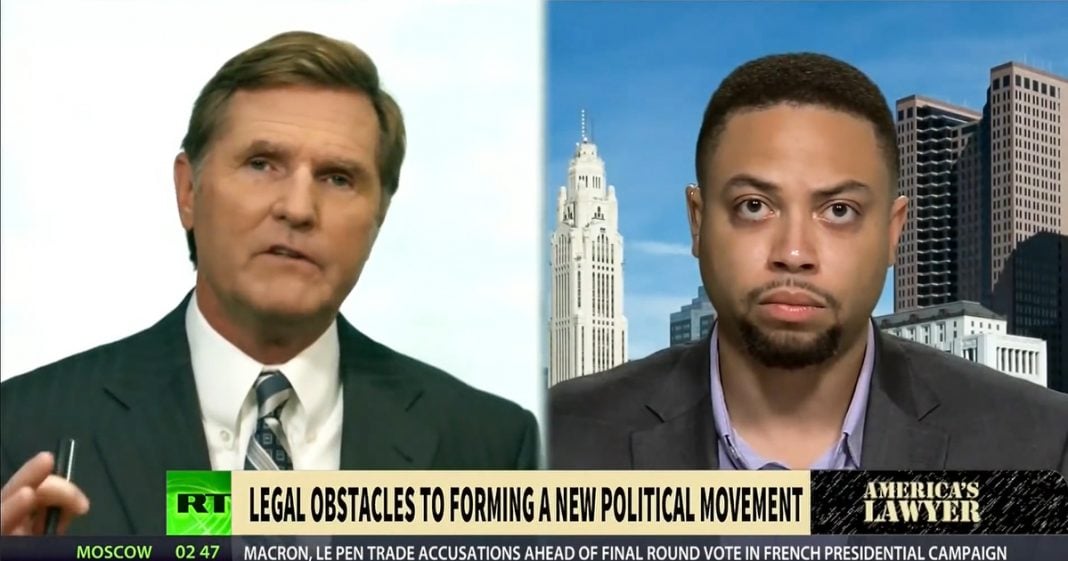 Via America’s Lawyer: Mike Papantonio talks to Chris Nobel, Legal Strategist for Brand New Congress, about the legal obstacles of forming a new political movement and what it will take to change the status-quo in Washington.

Papantonio: The 2018 mid term elections are still more than 19 months away, but there’s already an emerging political movement working to upend the status quo, a political action committee called Brand New Congress is seeking to select and run more than 400 candidates in congressional races across the country that support a progressive political platform. The goal is to recruit candidates that aren’t career politicians, but rather leaders in their community who truly represent the people of their district and their state. There’s no doubt an effort of this side will encounter tremendous legal obstacles, and political obstacles. So here to talk about that is Chris Nobel. He’s a legal strategist for Brand New Congress. Chris, can you start by outlining what the goal of Brand New Congress is for 2018 mid term elections, and what inspired the formation of this group?

Chris: How you doing, Mike? Thanks for having me. A little bit about Brand New Congress. It started right after Bernie Sanders campaign started to wind down in April of 2016. Some former staffers from the campaigned decided that it would be a good idea to run a similar presidential-style campaign in the 2018 elections, 2018 mid term elections, realizing that that’s a very important piece that gets overlooked in our sort of political theater. There’s over 400 seats open, up for reelection in 2018. The goal is to really run, like you said before, nonpoliticians, people that are leaders in their communities, people that don’t have little to no political experience, in the hopes that these candidates really reflect what the American public wants to see in their political leadership.

Chris: Well, I’ll talk about the political side a little bit first. Definitely resistance from, so we’re going to be primarying politicians from each political party, Democrat, Republican. We can definitely foresee some resistance from the political establishment in doing that. The strategy really is to infiltrate the systems that are already there, in hopes that once our candidates win those primaries, the establishment will have no choice but to back those candidates.

Legally, we formed a PAC. Brand New Congress is a PAC, political action committee. It’s not a Super PAC. So we just have the $5,000 contribution limit. We’re doing that because of transparency. Another legal issue is that a bunch of different states have different ballot access criteria for accepting candidates running for office. That criteria changes even within the state amongst people that are in established political parties, people that are forming political parties. So instead of forming a third party, which comes with it’s own other obstacles and additional requirements such as signature thresholds.

Papantonio: I think one thing that I think you’re going, I think the legal fights, and of course this is a legal program, and I’ve been trying to analyze what you have ahead of you. It is going to be political. There’s going to be political fights and legal fights that are going to take place, where they try to keep your candidate off the ballot. You’re going to have the Democratic establishment and the Republican establishment coming after you through the courtrooms.

Chris: Well, I mean, fundamentally there are issues that cut across ideological lines in America. This is not to say that this organization is supposed to be bipartisan or nonpartisan. Right now we have a bipartisan alliance of the political establishment that sort of keeps the status quo going. What post-partisan means is that this is a campaign that’s running based on issues. That’s what people are going to be voting for when the see our campaign wrote out. Yes, we’re going to have great candidates and everything. But it’s really not about the political parties or the personalities that come with that. It’s about finding that common ground amongst Americans, which is often economically related, infrastructure. We’ve got to do something about the opioid crisis, the war on drugs. Those are things that people across the political spectrum want to see accomplished in Washington. Really, they just need a vehicle to do so where they see that the candidates aren’t going to be playing political games with their positions. They’re going to be sticking to this platform that we’ve put out there, and they’re going to know that they’re not receiving money from corporate donors and all that.

Papantonio: I saw where Cenk Uygur is trying to come out with a new variation of what the Democratic party, for example, should look like, where he talks about money and politics. He talks about some of the exactly the same issues that you’re talking about here. What I thought was so interesting was the way that the Washington DC bubble came unglued. They went crazy. What I call the John Podesta folks that have an interest in projecting themselves into the future of politics forever, whether it’s David Brock, whether it’s John Podesta. They went apoplectic, where you had Cenk Uygur talking about the idea of a new concept for the Democratic party. They don’t want new. They want the old to continue just as it is. My guess is, and I’m just, my guess is that the way they’re going to go at this is throwing huge money politically, but huge money from a legal attack that you’re going to be confronted with. What are your thoughts on this? They are having a very difficult time with the idea of change, aren’t they?

Chris: I agree. I think the political establishment in general is Republicans and Democrats. Speaking about the Justice Democrats we’re talking about is a sister organization with Brand New Congress, and sharing media and all that jazz, to sort of accomplish the same goals, as you’re saying. As we were talking about before, these legal challenges, yes, in terms of ballot access, in terms of making sure that the press is really put on our candidates is something that’s very foreseen. But that’s why we are sort of taking the lead as an organization. The candidates will have their own candidate committees, when they’re launched. But right now, we, as part of the LOC, which is a brand new campaign, we are providing campaign services. We’re making sure all the T’s are crossed and all the I’s are dotted. We’re preparing for this backlash, this sort of establishment backlash. That comes whenever somebody that’s not a part of the old gang experiences.