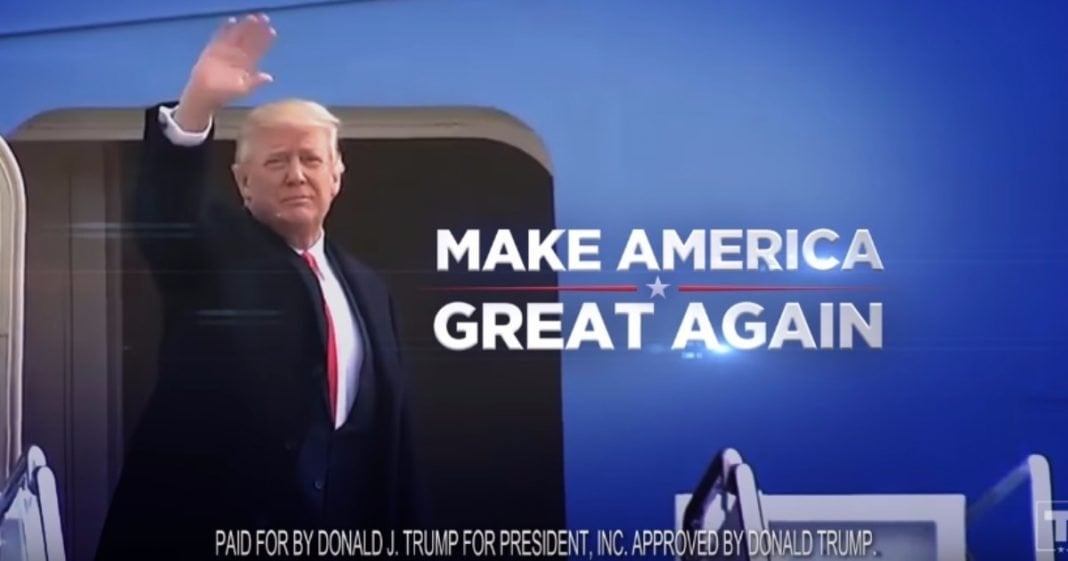 President Trump should be focused on fixing America and, as he puts it, “making [it] great again,” but all he seems to be doing is lying about what he has accomplished so far and gearing up for his reelection in 2020.

At least that’s how it seems in a newly-released campaign ad from the President in which a patriotic voice extols the virtues of the POTUS’ first 100 days in office.

“America has rarely seen such success,” the voice proudly proclaims over a still photo of President Trump signing an executive order.

The ad isn’t particularly long, in part because his list of accomplishments are relatively short. So short, in fact, that they were forced to fudge a few facts to make the man look better than he is.

Ok, sure. If you like anti-worker far-right Conservatives. Win.

No matter the grander context, Trump will take credit for any and every job created under him. He can have this one.

Now here’s where things get squirrely. While Trump is clearly intent on poisoning American water and soil in the pursuit of all-American oil, the video features footage from the Keystone XL pipeline, a decidedly Canadian venture – Not very energy independent of us, aye?

Ehhhh sure. Ok. Those regulations are there for a purpose, but if we’re being strict here, they may kill jobs. And people.

Here we go; a big, fat lie. That tax plan isn’t anywhere near being instituted and has in fact been roundly rejected by anyone, anywhere. Called “dead on arrival,” President Trump’s brief tax plan would provide massive cuts to the wealthy while leaving major parts of the government unfunded. You can call something the biggest ever, but if it’s not realistic, how useful is its size or lack thereof?

“You wouldn’t know it from watching the news, but America is winning and President Trump is making America great again.”

There you have it. In a 25-second ad that can barely stand to tell the truth, the POTUS still manages to attack “the news” as a whole. Don’t trust anyone but Trump.