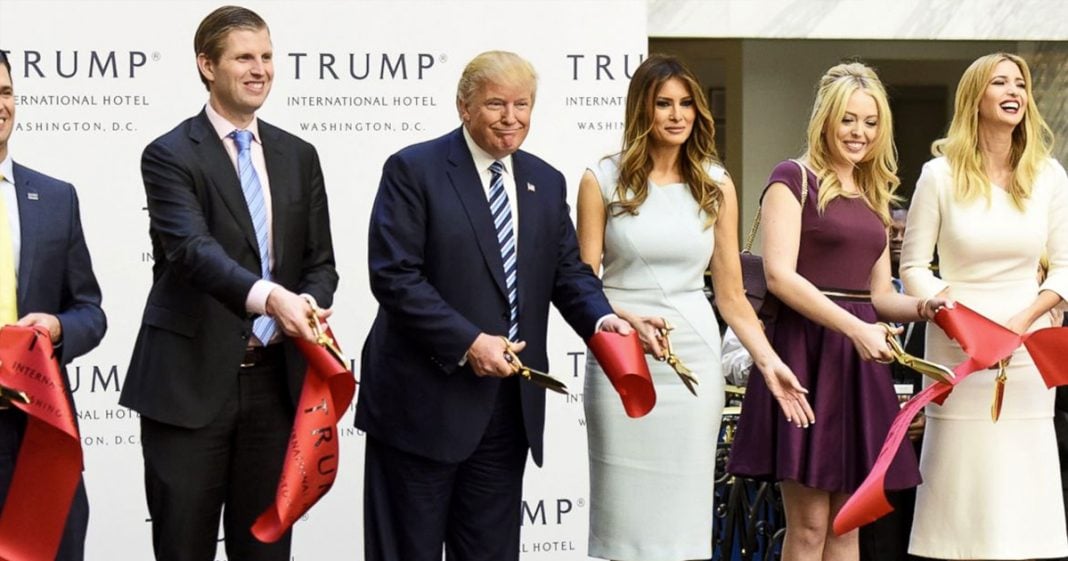 The only are where Donald Trump has been successful in his first 100 days is in promoting his own businesses and the Trump Brand. He’s in this to make money, and he doesn’t care about policy at all. Ring of fire’s Farron Cousins discusses this topic.

We’ve done it, folks. We have hit 100 days with Donald Trump as our president, and by almost every single measure, everything this man has done has been a complete failure. But, in that one small area where he’s been successful, it has been a tremendous success. And unfortunately, that one area where Donald Trump has been successful is enriching himself and promoting the Trump brand across the globe. That is the only thing that this man has done successfully and done well over the last 100 days. We don’t have any new policies, or at least any good new policies. We have a horrible new Supreme Court justice, who’s going to be sitting on that bench for probably 20, maybe 30 years. But Donald Trump is making a ton of money and promoting the Trump brand to every foreign national who comes over to this country. Why do you think he is meeting with these people, these heads of states from other countries? Why is he meeting with them at Mar-a-Lago instead of the White House?

Well, the answer is simple. Donald Trump wants to show off. He wants to say, “Look what I’ve built. Look at this thing with my name on it and how grand it is. Wouldn’t you like one of these in your country?” That’s all this is. This is a massive sales pitch for the Trump brand, for Trump properties, for Trump himself, to everyone else around the globe. We know how horrible his businesses are here in the United States. We know that his clothing line, his wife’s clothing line, is essentially made with sweatshop labor, people making a dollar an hour over in China. We know that workers at his properties are often prevented from joining unions or forming unions in order to get things like benefits, higher pay — you know, things that keep workers happy and safe and productive and healthy. Trump doesn’t want to give them that. What he does want to do is build more of those properties all over the globe.

So in terms of policy, so far in 100 days, the Trump administration has done absolutely nothing. But in terms of making money for himself and promoting his brand, he has been the most successful president ever in that regard. Nobody has done more to promote themselves than Donald Trump has. And if you need any further proof, think about this. In his first 100 days in office, George W. Bush visited at least two other countries. Barack Obama visited at least eight other countries. Donald Trump hasn’t left the United States, and any time he leaves the White House, he just goes to a property that he owns, and then we, the taxpayers, pay for that. We pay for the Secret Service to rent rooms, we pay for the Secret Service to rent golf carts, and all that money goes back to those Trump properties, which eventually makes its way back into Donald Trump’s profits.