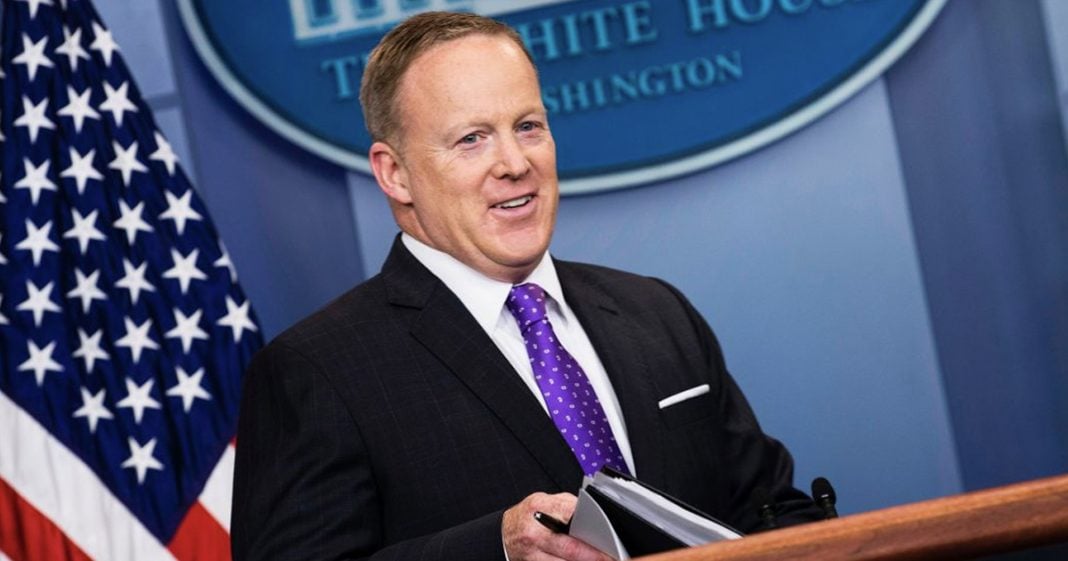 Sean Spicer is the king of misdirection, and when he was asked at a press briefing this week about the ongoing controversy surrounding Michael Flynn, Spicer reached into his bag of dirty tricks and decided to blame it all on Obama. Ring of fire’s Farron Cousins discusses this topic.

In case you haven’t been following along, the Mike Flynn Russia Payment Saga took an unexpected turn this week when we learned that he was told not to take any payments from them. He didn’t disclose them properly. Basically the whole thing is just getting shadier and shadier by the day, so at a recent White House Press Briefing Sean Spicer was asked about this because it’s getting to the point where you can’t ignore it anymore. But Sean Spicer knew exactly what to say to get reporters off his back.

During that press briefing Sean Spicer blamed the entire Mike Flynn Russia debacle on President Obama. In Sean Spicer’s mind, and what he told reporters at that press briefing, it was Barack Obama’s fault that any of this ever happened because he’s the one who hired Mike Flynn back in 2012 to begin with. That’s what started us down this whole slippery Mike Flynn slope that we’re currently on. It’s all Barack Obama’s fault. Just like everything else with the Trump administration.

When something goes wrong you blame Obama. Republicans have been doing this basically since Obama because the Democratic nominee in 2008. Everything was this man’s fault. Now I was not a huge Obama fan. I liked him, I didn’t like all of his policies, but as a person I liked him, but I do know enough to know that Obama is not responsible for any of this mess. This is a Donald Trump campaign, Mike Flynn problem. Obama didn’t do this. Obama did not make Mike Flynn go and give a speech and, then get paid for it, and then wrongly disclose the money, or accept money when he wasn’t allowed to, or however this thing is unfolding.

But Sean Spicer, Donald Trump, everybody on the right wants to continue to blame Obama for everything. That’s not how it works. That’s not how this is going to continue for the next four years, assuming Trump makes it four years without getting impeached. We can’t every day say, “Well, yeah, Trump didn’t something bad but probably something related to what Obama did.” That doesn’t work. Obama is no longer the president, and yeah some of his policies are in place, so when those go bad or go well he should take the blame or get the credit. But for stupid stuff like this? Like this whole Russia debacle? You cannot blame Obama for this. There’s lots of things that Obama did that I’m not a fan of, but getting the Trump campaign all tied into Russia certainly isn’t one of them.