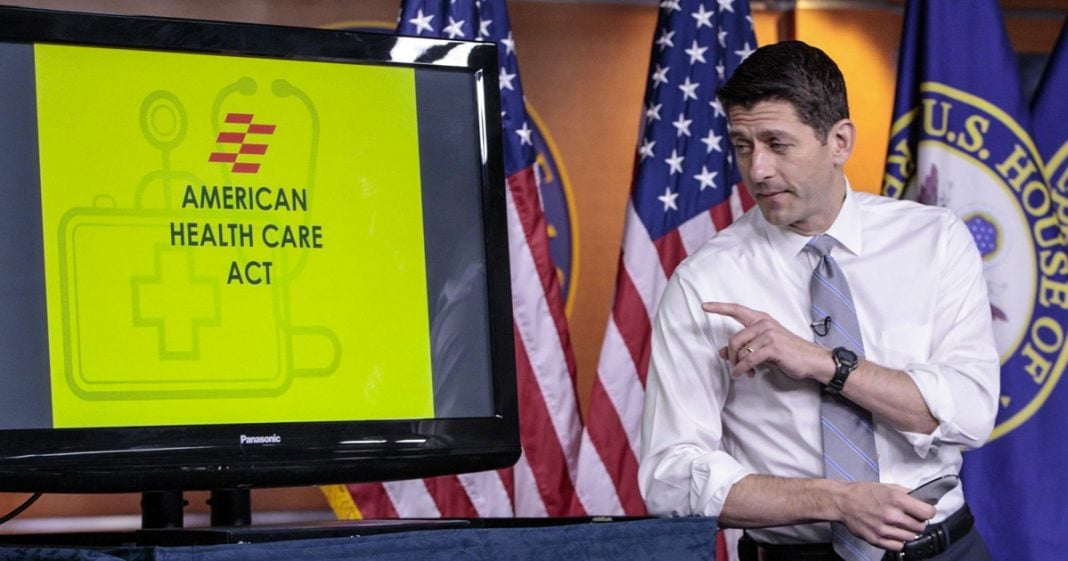 More details are emerging about Paul Ryan’s Obamacare replacement plan, and it looks like programs like Medicaid and Medicare are going to take huge hits. These programs provide healthcare coverage to low-income and retired Americans, but Paul Ryan apparently thinks these groups have it too good and must be punished. Ring of fire’s Farron Cousins discuses this topic.

We finally know a little bit more about Paul Ryan’s Obamacare replacement plan. From what we’re learning now, it’s just as bad as the previous plan that Paul Ryan and the Republicans have put forward. The latest details to emerge show that Paul Ryan wants to kind of re-do the way we fund Medicare and Medicaid payments, give the states less money to fund these things, and then the states will have to make up the difference if they have it in their budget.

What this means is that the federal government wants to spend less. States are already going broke across the country. They don’t have any money so there will be fewer services available to people on Medicaid and Medicare. Essentially low income people, the poorest of society, the ones who need help the most are being denied that help by Paul Ryan and his new health care plan. I also have to ask the question here, why is Paul Ryan so obsessed with getting rid of Obamacare?

We know the tax side of it. That repealing those subsidies, the tax breaks, whatever would lower the taxes on 400 families in the Unites States and that’s probably good motivation for Paul Ryan but to be perfectly honest, Congress has plenty of other giveaways that they’re working on for the wealthy. They don’t need those Obamacare taxes back in their pockets when they’re going to get so many more gifts from the Trump administration and the Republican controlled Congress.

Couldn’t they just leave this one? Why is this one tax break so important for those wealthy people? So important to Paul Ryan? I think there’s gotta be something more to it here than that. After all, Congress is already working, even if they leave Obamacare in place they’re going to rescind those tax breaks and those subsidies for low income people to buy health insurance. Those 400 wealthy families are going to get their tax money back no matter what at this point. That’s done. Why dismantle this program?

Is it because it was put in place by a black liberal President? That really is one of the only logical conclusions you can come to at this point. Republicans hate Barack Obama so much that they’re willing to make millions of people in this country suffer so that they can undo his signature achievement. They’re that petty. They’re that childish. They’re that heartless. We’re talking about millions of people losing their health insurance and now millions more losing Medicaid and Medicare coverage because states won’t be able to make up the budget shortfalls.

It’s all because Republicans still, even though they control all three branches of government, can think of nothing better to do than spite Barack Obama.