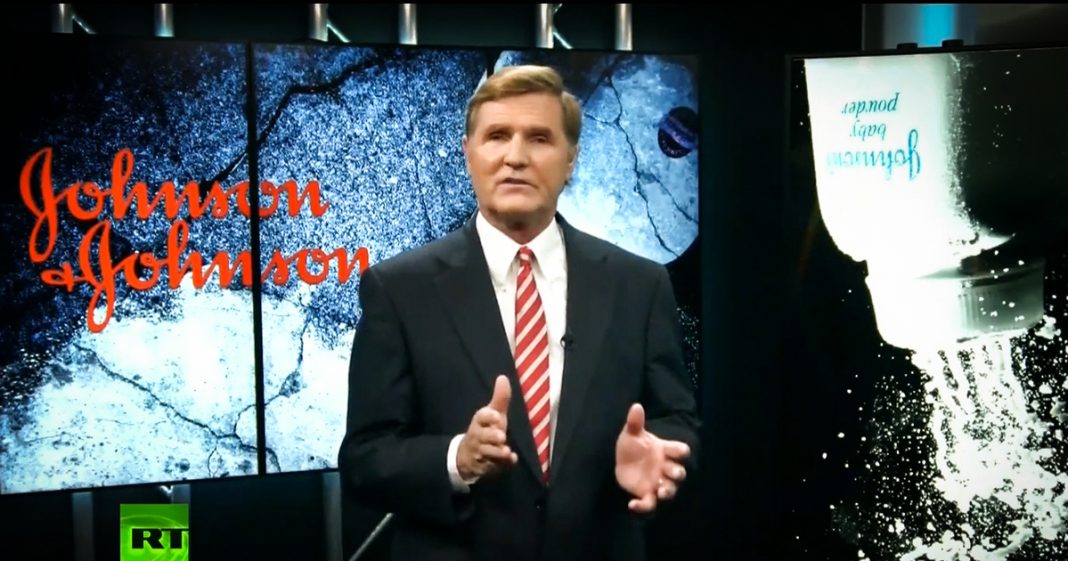 In the premiere episode of America’s Lawyer, Mike Papantonio brings to light the disastrous effects of Johnson & Johnson’s talcum powder, and how the company tried to cover up its dangers. Joining Papantonio to discuss this is attorney Kim Adams.

Talcum powder, a seemingly innocuous, everyday household product for well over a century, has turned deadly for some users. Specifically, for the women who have found themselves victims of ovarian cancer as a result of using talcum powder in the genital region. What manufacturers have known (or should have known) for at least 45 years is that the substance can cause chronic inflammation – a condition that medical science has connected with the development of some types of cancer.

Papantonio: As early as 1971, J & J had enough information to being asking questions about potential harm their body powder could create for women. In 1971, scientist discovered particles of the talc embedded in ovarian and cervical tumors. It was the earliest red flag for the potential for suffering that was going to follow.

In 1982, another study clearly showed a woman’s risk for contracting ovarian cancer doubled, if they used talcum powder. After that, there were half a dozen or more studies that looked at the relationship between talcum baby powder and ovarian cancer in women. All of the results from those studies were enough to put any reasonable corporation on notice that the product they were selling had the potential to cause injury and death by way of ovarian cancer.

The federal government, as early as 1990, did what you’d expect them to do. Their oversight was not there. They completely ignored the problem. According to J & J’s own documents, they were warned about the threat that their talcum powder posed to women on September 17, 1997. This document shows that scientists at Johnson & Johnson, working with Alfred Werner. He warned the company that what they were saying about their talcum powder was not true. Specifically, they were misrepresenting the truth about how dangerous that problem was. The company claims were completely false. That’s what this document shows.

The company digested that information. Then, one month later, after they knew that, one month later on October 20, 1997, they sent a question and answer form to their employees instructing them on how to answer questions about the talc’s relationship to ovarian cancer. As expected, the response that they told their employees was, the talc was perfectly safe. Don’t worry about a thing. They told the opposite of what they had learned just a month earlier. While they were covering up the truth, Johnson & Johnson was trying to find new ways to expand their markets for their talc products. They figured out that they could create a niche market through special marketing efforts with African Americans and Hispanic customers. Internal documents show exactly how aggressively J & J went after that market, even though they knew that their product had potential to cause ovarian cancer. They pushed the product.

Even though Johnson & Johnson refused to put any warning about ovarian cancer on their product, the supplier of the talc that J & J used did add warning labels in 2006. Again, J & J chose to make no warning. At this point, 4 juries have listened to the weeks, weeks and weeks of testimony and reviewed the documents directly from the file cabinets of Johnson & Johnson. Each one of those juries found that J & J failed to warn consumers about the link between talcum powder and the increased risk of ovarian cancer. Approximately 22,000 American women are diagnosed with ovarian cancer every year. The many autopsies that take place with these women clearly show the presence of talc inside ovarian tumors. Still, J & J has refused to create any type of legitimate warning for women who should just have the right to make a choice, just the choice of whether they’re willing to accept that risk or not. Give them the choice.

At this point, there are 1,200 lawsuits have been filed against J & J. Several of the cases that have been tried have resulted in verdicts ranging from $50 million to $70 million dollars, after the jury has seen how callous and how corrupt the conduct of J & J has been.

As you’re going to see with most of these cases, corporate media’s been unwilling to tell the story about J & J in any meaningful way because of the incredible amounts of money that Johnson & Johnson spends in advertising on networks like ABC and CBS and NBC. It’s left up to us to tell you a story that should have been disclosed decades ago.

Papantonio: Joining me now to discuss the Johnson & Johnson story is attorney Kim Adams. Kim, let’s start with the fundamentals of what talc is and what kind of threats it poses in the human body.

Adams: Talc, you’ve kind of explained it. Talc is a powder that’s used to absorb any kind of wetness of any sort. The risk of talc, which we have found, is the risk of ovarian cancer. The risk and the benefit to these, to women, primarily, is just something that we’ve never really even seen before. We see a risk-benefit ratio most times in most of the product cases. The risk here, ovarian cancer, experts estimate 10-15% of the 20,000 women diagnosed with ovarian cancer each year is related to talc. We just don’t hear of those kinds of numbers.

Papantonio: Okay. At what point, I’m wondering, Kim, at what point did Johnson & Johnson become aware that their talc products clearly could cause these kinds of illnesses in their customers? When did that happen?

Adams: At least 30 years ago. At least 30 years ago, Johnson & Johnson knew of these risks. They have done nothing but try to hide these facts from women. They have heard from the studies, I think there’s been at least 10 to 12 to 15 studies showing the relationship. They have gone to the authors of those studies and said, ‘Hey. We don’t believe in your results. We don’t believe in your findings.’ They have made every, every effort to defend talc at all costs. The FDA. The FDA has done nothing. J & J presented a task force, even, to say, ‘We’ve got to defend talc.’ They presented this information to the FDA, trying to do everything in their power to defend talcum powder, when the evidence was just so insurmountable that it’s just so unbelievable that this product is still on the market.

Papantonio: Kim, J & J knew about the problems, if I’m hearing you right and from what I have reviewed, that certainly is the case. They did nothing. You say the regulatory agencies in the United States did nothing. Why didn’t they step up and actually actively do something to, at the very least, Kim, at the very least, warn these women. Give them a choice. “Do I want to use this baby powder or not? Do I want to take this risk or not?” What is your take on that. I know you’ve handled a lot of cases with defective women, products that are sold to women. What is your take on this case?

Adams: Primarily, financial and political gains by J & J. Their influence is something that we face everyday against big pharmaceutical companies. The voices of the consumers are not heard until it’s too late. That’s what’s happening here. Johnson & Johnson put forth as much money and as much power and as much politics as they could to overcome and influence our federal FDA in not taking any action, when the evidence was so clear on this particular case. It’s just unbelievable.

Papantonio: Kim, how many lawyers throughout the country, or trial lawyers, are working on trying to get Johnson & Johnson to do what they should do? That is either warn, or modify their product.

Adams: Hundred of lawyers. 10-15% of all ovarian cancers are estimated to have some talc relation. Thousands of women. We’ve got hundred of excellent trial attorneys trying to get J & J, just put it in your label, just make some estimation. Let the world know. Instead, J & J chooses to say, ‘Women are mis-remembering how they used the product. Women don’t remember that they used it for feminine hygiene. They didn’t use it frequently enough.’ They’re trying everything in their power to confuse the public, essentially, confuse the public.

Papantonio: Okay. A client who has cancer, maybe has died from cancer, the story that the defense, J & J defense comes in and says, ‘Well, gee, you just don’t remember what you did for 30 years. Maybe you used a different powder.’ They attack the claimant. Is that what you’re seeing happen in this case? After they knew for this many years, when trial takes place, they attack the claimant and try to make the claimant look like they’ve done the bad thing, even though they’re finding the Johnson & Johnson fiber inside the woman’s tumor. Did I get that right?
Adams: That’s right.
Papantonio: Is it pretty much an attack mode that we see?

Adams: That is exactly right. They are attacking women. Women still, to this day, are so confused as to what the science is. We have women calling our offices all the time. “Should I use talc?” “Shouldn’t I use talc?” J & J is spending more money today, I guarantee you, on promoting talc, still, than they used in all the research that they’ve done before they put this product on the market, over the last 30 years, when scientist, after scientist after scientist has told them, ‘Take it off the market. Give women a warning.’ This is not a product that gives you a cure for HIV or gives you some huge benefit. This is talcum powder. It’s time that we hold J & J accountable.

Adams: That is correct. Yes. That is absolutely correct. They still are doing it. It is still all over the internet, social medias. It’s still being promoted. The unfortunate thing here is all of the women that were impacted over all of this time, essentially it’s the cost of doing business for J & J, which we see time and time again. The problem here is, we still have young women, 20s, 30s, hysterectomies, deaths, being diagnosed all the time. You have women who were diagnosed maybe 20 years ago. The biopsy samples, the evidence to prove up their case, gone. They’re never, potentially, going to have their day in court. J & J knows that. J & J’s very educated on the legal system. They know bide your time, bide your time. Statutes of limitations are going to expire. These women are never going to be able to come sue us outside of court and get their day in court and get the justice they deserve.

Papantonio: One thing we see them doing, I’ve got about a minute here, Kim, one thing we see them doing is, as you say, confusing women and saying, ‘Gee whiz, the science that’s telling us it’s going to cause cancer is just not right. Even though we’re finding the talc powder inside the tumor, you can ignore all that.’ Am I getting that right? In about 30 seconds, did I state that right?