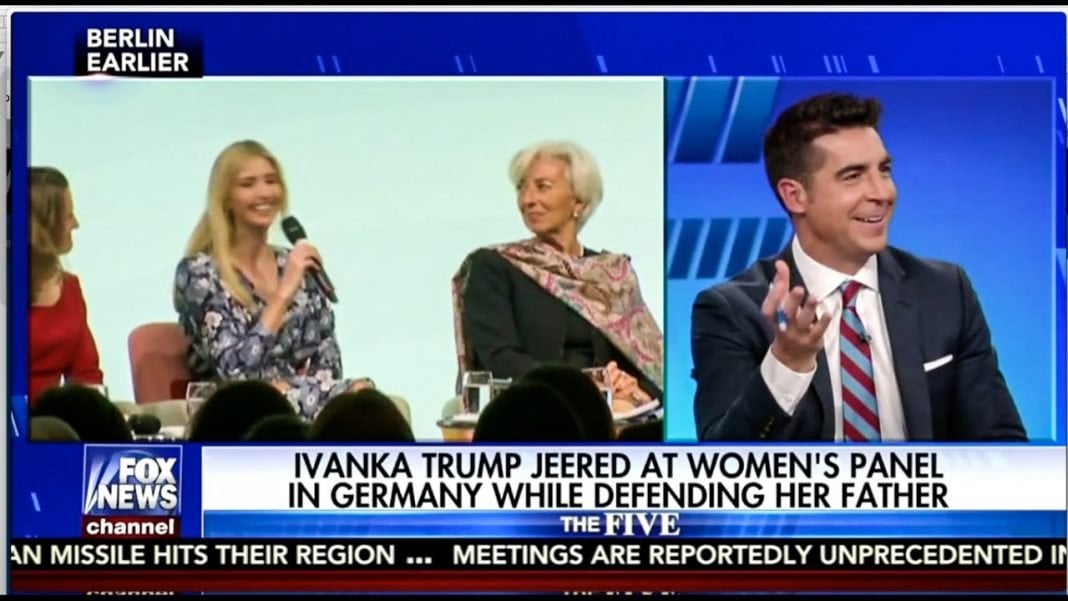 Fox News host Jesse Watters went on a sudden vacation the day after he made a sex joke about Ivanka Trump on live TV. Clearly this network is steeped in a culture that makes people like Watters believe this kind of behavior is acceptable. Ring of fire’s Farron Cousins discuses this topic.

Fox News host Jessie Watters found himself in some hot water earlier this week when he implied an oral sex joke about Ivanka Trump on the air, and then suddenly, Wednesday night, Jesse Watters announces he’s decided he’s going to take a vacation with his family, but don’t worry, he’s going to be back on Monday, so he says. I remember Bill O’Reilly saying the exact same thing right before he was canned and never allowed back on the network.

Jesse Watters. You know, what’s funny about this is that he was an O’Reilly protégé. This is a guy that liked O’Reilly. A guy that worked with O’Reilly for a very long time, and clearly shares a lot of his same attributes, and thought it was perfectly acceptable to go on the air and make this kind of joke about Ivanka Trump speaking into a microphone I guess a little too seductively, and so he couldn’t control himself and decided to make this off-handed comment, which again has now landed him in hot water.

Here’s the irony of this, though. Apparently, Ivanka Trump is the only woman that you’re not allowed to make jokes about on Fox News now. Think over the years all the horrible things that this network said about Michelle Obama. They even went after the Obama daughters. But you say one thing about Ivanka Trump and suddenly you have to go on an emergency vacation with your family? I don’t know if Jesse Watters will return. I don’t know if the network has actually turned over a new leaf after firing Bill O’Reilly with all these sexual harassment allegations, but I do know that there is something wrong with the mentality in that network where people feel comfortable enough to say these kinds of things on live television. That’s a problem. When your workers, when your hosts, when your presenters are comfortable enough, knowing I guess what they’re saying behind the scenes is okay to say on the air, you have created a hostile work environment for all of the women at that network. That kind of discussion is inappropriate and unacceptable for national television.

You know, he did this on the show The Five, where he’s surrounded by four other women. For him to make this comment in the presence of those women, again, on live TV, just shows how comfortable he is with the misogyny that has become rampant at Fox News. The women there have no rights. They have no protection. They have no protection from the higher-ups, who have engaged in sexual harassment. They have no protection from the hosts there. This is a dangerous place for women to be working, and unfortunately firing Bill O’Reilly clearly did nothing to solve the problem. The problem starts with the higher-ups. Firing Roger Ailes has not changed the boys’ club mentality of Fox News. Something better, something bigger has to happen within that network to change the way that these people view women, because this is unacceptable.

I feel kind of weird having to go to bat for Ivanka Trump here, but what Jesse Watters did on the air absolutely merits him being fired. Hopefully he’s not going to return to the air after his little family vacation, because the last thing we need is another jackass misogynist on the air on Fox News making women all over this country feel uncomfortable.