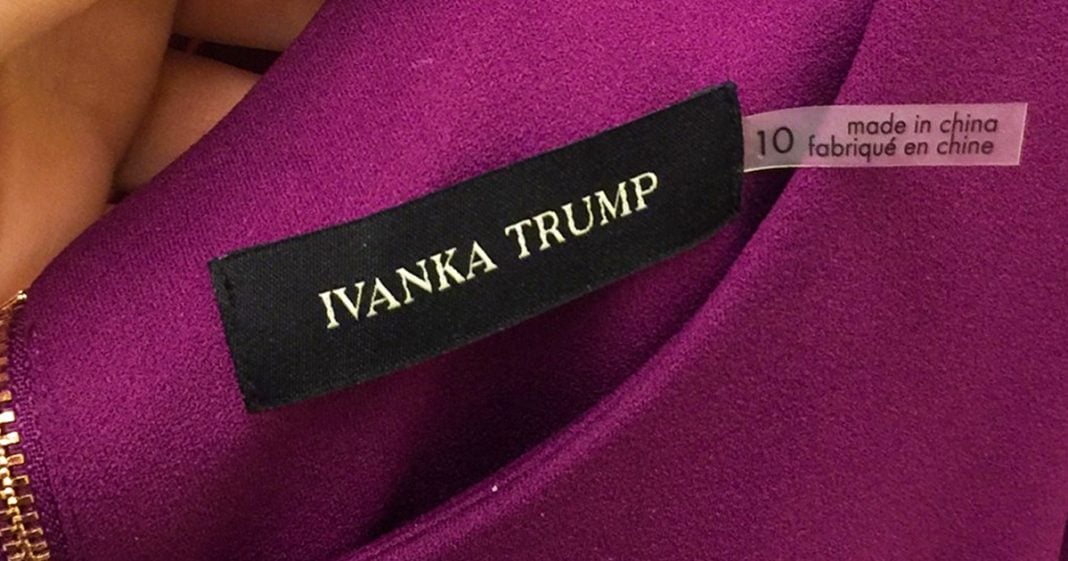 A new report shows that the workers in China who produce Ivanka Trump’s clothing line are being paid about $1 an hour and that they are having to work as many as 82 hours of overtime every month. If Trump was serious about bringing jobs to the United States, he should start with his own family. Ring of fire’s Farron Cousins discusses this.

According to a new report, the factory in China where they make the Ivanka Trump brand of clothing, the workers there are being paid $1 an hour. Now, to give you some perspective, the prevailing wage in that area is about $2 an hour, so these people are making half of what their contemporaries make in the same field in the same area.

The problem with this obviously is because these workers over there deserve a better wage, but more importantly, Donald Trump himself campaigned on the promise that he was going to bring manufacturing jobs back to the United States, and a lot of people, for some reason, believed him. Why on earth should we think that this man and his family give a damn about American workers when their own lines of goods are produced overseas for a $1 an hour?

To hell with American workers. To hell with American wages. Why should we worry about paying benefits to people when we can just go to China and pay people $1 an hour to make a $6,000 dress? That’s the Trump mentality, and it represents everything that is wrong with Corporate America today. It represents everything that’s wrong with the Trump family.

Yeah. Donald Trump’s a billionaire, allegedly, but he is making his money … his family is making their money off the backs of workers who are getting screwed over every single day. These people are working 82 hours of overtime every month for $1 an hour, not to mention the fact that we have stores here in the United States that are actually rebranding Ivanka Trump’s line of clothing with different names, so that people will actually buy them because nobody wants to buy her crap right now.

That makes it even worse for these workers overseas. They’re busting their asses to make stuff that nobody over here wants to buy anymore because the Trump name, the Trump brand, is toxic. If Donald Trump wants to bring manufacturing jobs back to the United States, if he wants to keep people employed, he needs to start with his own companies and his own family.