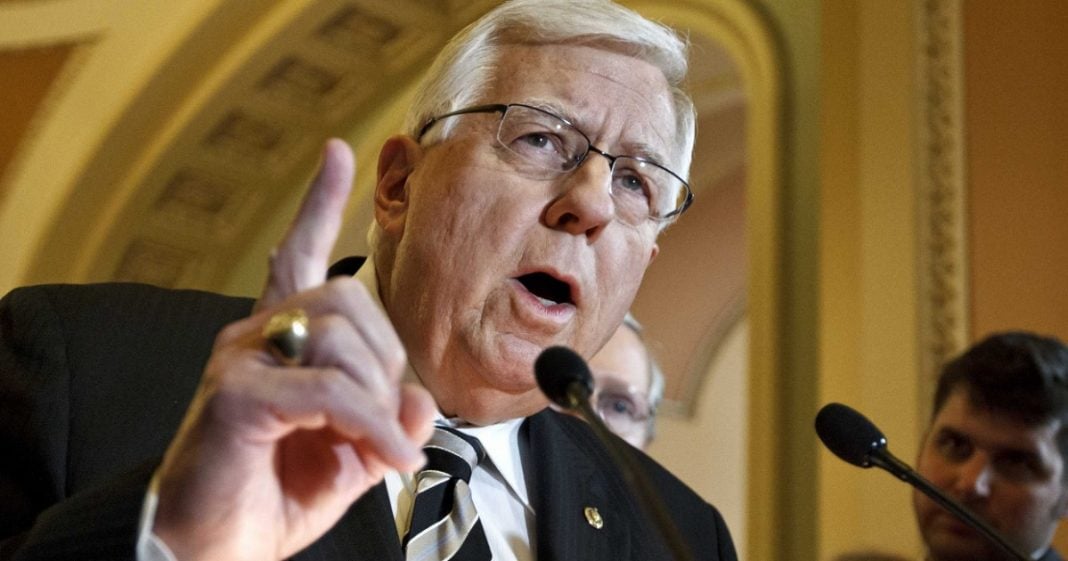 A U.S. Senator in Wyoming said this week that those who do not conform to traditional gender roles are asking for violent reactions and beatings.

Senator Mike Enzi was speaking to a group of middle-and-high school students this week when he responded to a question about LGBT rights by arguing that people who act outside societal norms are “asking for it,” when it comes to violent reactions.

Enzi’s outdated views were exposed when he was asked by a student about what he and his colleagues were doing to improve the lives of LGBT residents of Wyoming.

“What work are you and your comrades doing to improve the life of the LGBT community in Wyoming? How do you plan to help Wyoming live up to its name as ‘The Equality State?’”

Enzi responded by suggesting that “civility” was the number one concern, and that one should seek to be civil by not being publicly outside of gender and sexuality norms. If one did act outside of those norms, one was “asking for” violence in return.

“There are a lot of problems that don’t have a federal, one-size-fits-all solution. Everything can’t be done by law; that’s one of the problems we have in this country, thinking that everything could be done by law. What we need to have is a little civility between people.”

Enzi then shared his own personal anecdote of a man who he claimed often wore a tutu to bars.

“We always say that in Wyoming you can be just about anything you want to be, as long as you don’t push it in somebody’s face. I know a guy who wears a tutu and goes to bars on Friday night and is always surprised that he gets in fights. Well, he kind of asks for it. That’s the way that he winds up with that kind of problem. I’d be interested in any solutions that you have for how we can make that work better.”

I don’t know, maybe holding those who assault others accountable for their actions rather than blaming the victim?

“The biggest thing that we need is civility.”

So really, when Enzi is suggesting “civility,” he isn’t suggesting that those who are offended by a tutu might simply keep that emotion to himself. Instead, he suggests that “civility” means not wearing the tutu at all. And if you do wear the tutu? You deserve whatever comes to you.

Enzi is certainly not the only elected official with such backward views, but it should be made clear that in 2017, such ignorant and dangerous beliefs should not be openly shared with the public – much less children.

Later, Enzi issued an apology for the tone of his comments:

“It is such a simple lesson ― it is never permissible to hurt another. Hatred in any form is destructive to the very foundation upon which our society is built.

No person, including LGBT individuals, should feel unsafe in their community.”