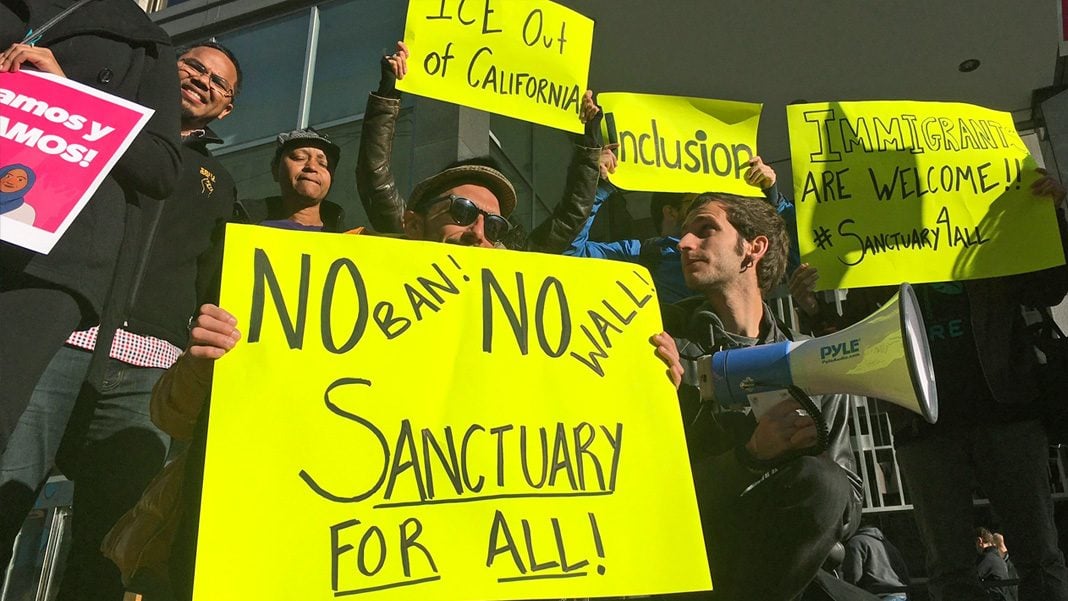 A federal judge has struck down Donald Trump’s executive order that tried to deny federal funds to so-called sanctuary cities who help undocumented immigrants. Trump’s records with the Courts is getting worse and worse, but that’s what happens when you have a know-nothing President. Farron Cousins discusses this topic.

Furthermore, the judge said that this executive order was a clear violation of the 10th Amendment, that says that states, you know, basically any power not granted to the federal government will go to the states and cities. These cities within these states kinda have the right to do what they want to do in this particular circumstance.

Now, the term sanctuary city has been discussed a lot recently, and republicans think that it means that, “Hey, just bring all your illegals into our city, and we just won’t do anything about it.” But what it really means, is that these cities typically do not immediately turn over people that are in this country illegally to federal authorities to be detained indefinitely and then deported. There is no, “Just come here, we’re not gonna say anything, we’re gonna keep it quiet.” That’s not how it works. It’s just a far more humane system, rather than rounding these people up like animals, throwing them in prison for an indefinite amount of time, and then shipping them back. That’s what a sanctuary city is.

And Donald Trump, obviously being such an anti-immigrant president, hates sanctuary cities. The republicans hate sanctuary cities. So they’re trying to punish them, because they’re treating immigrants like human beings. That’s what this is really about. This isn’t about wanting to stop illegal immigration. This isn’t about protecting US citizens from dangerous immigrants. It’s about the republican party being angry that some cities in the United States are doing it well. They’re treating people like people. They’re not acting like these people are all criminals, and that they all deserve to be in prison. They understand what these people have gone through in their lives, and why they came to the United States looking for a better future.

Donald Trump has already said … well, first of all, he got the court wrong. He couldn’t remember which court actually ruled on this, in one of his tirades against the judge, then he also said, “We’ll see you in court.” I mean, they promise to appeal this to the 9th Circuit, but I don’t think that any judge is going to look at this and say, “You know what, yeah. Trump, you can do this.” Because the first judge was very clear in his ruling, this violates the constitution, clearly, in several different ways.

And that once again brings us back to the problems of a know-nothing president. Donald Trump doesn’t know the law. And yet, Donald Trump is expected to write the law, to issue these executive orders that do not run afoul of the law. And he can’t do it, cause he doesn’t know what the law is. We have seen this time and time again in the first three months that this man has been in office, and we’re gonna continue to see it every month until somebody finally impeaches the guy. Because Donald Trump doesn’t understand what he’s doing. And when you have somebody that doesn’t understand what they’re doing, as the most powerful person in the world, you’re always going to run into problems. And that’s what we’re seeing on a near daily basis, with Donald Trump.