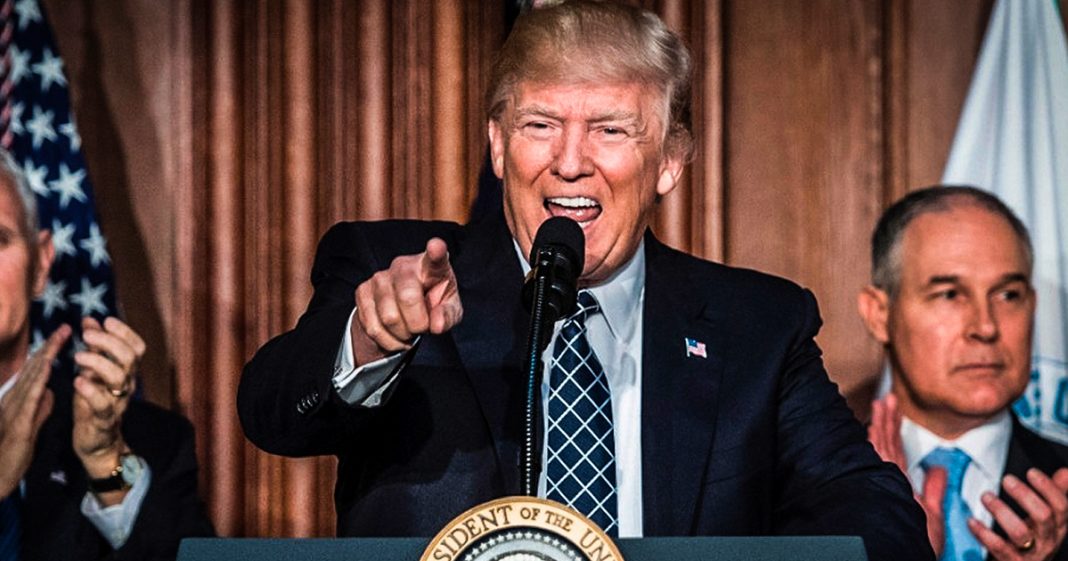 During his Earth Day address this year, Donald Trump didn’t mention the phrases “climate change” or “global warming” one single time. This should come as no surprise considering how hostile this administration has been to the scientific community. Ring of Fire’s Farron Cousins discusses this.

This past Saturday was Earth Day, and during his Earth Day address President Donald Trump failed to mention the terms climate change or global warming, even one time. During his entire address there was not a single mention of climate change or any climate change related events. Basically, Donald Trump went out there on the day that we’re supposed to acknowledge that we as human beings are destroying this planet, he went out there and said basically nothing. He didn’t talk about the fact that we’ve got to cut carbon emissions. He didn’t talk about the fact that we have to protect coastal low lying communities from the increase in water level. He didn’t say anything about actually protecting, preserving, and making the planet better.

Instead, he gave us typical republican talking points. Smart regulations, you know, ones that don’t hurt businesses. Well, I have news for you Mr. Trump, and every republican ever. Regulations don’t kill jobs. In fact, according to every study on the issue, regulations actually provide a net benefit to economies as opposed to letting those regulations go away. Meaning that regulations create more jobs, create more economic activity than undoing those regulations would do. Furthermore, repealing regulations, which is what this Trump White House is all about, that’s why they’re cutting the EPA by 31% and laying off over 3,000 workers, we’re losing economic activity. We’re losing human health because we’re letting corporations get away with destroying the environment.

An American Lung Association report last year showed that air quality in 2016 actually improved. Now, there’s still 166 million American citizens living in areas where the level of air pollution is considered dangerous, but overall things are getting better. Donald Trump is going to undo all of that. That’s not speculation, that’s not hyperbole, that is what he said he’s going to do. Why? To benefit corporations in the fossil fuel industry. Unless you are a CEO of a fossil fuel company, repealing environmental regulations has no benefit to your life. Basically what, there’s maybe 30, 40 people in this country who would benefit from that? That’s it. Is that worth laying off 3,000 people from that their government jobs? Is that worth risking the lives of 4,000 people every year by doing away with Obama’s Clean Power Rule?

We’re putting the profits of corporate fossil fuel CEOs over the lives of American citizens. You know, since the Clean Air Act was passed in the 1970s an estimated 160,000 lives have been saved per year from reduced airborne particulate in this country. 160,000 lives every year. We’re still losing on average 200,000 lives every year in the United States, premature deaths due to air pollution alone. We could keep reducing that number. We could literally save lives, thousands of lives, possibly hundreds of thousands of lives every year if we would just say, “Hey corporation, fossil fuel, coal power plant, you can’t spew that crap into the air anymore.” That’s all it takes.

That is all it would take to save American lives, reduce the number of people who have asthma attacks every year, reduce the number of sick days that employees take so productivity actually increases, but we’re not willing to do that because of 30, 40 fossil fuel CEOs that we want to take care of. That’s what’s more important in this country today. Your life is worth less than the few extra dollars that a corporate CEO gets to put in his pocket. I want you to realize that, and I want you to think about that next time you head into your precinct and cast your vote. Which candidate is supporting the money of the fossil fuel companies, and which candidate thinks that your life is more important than a $10 or $20 bill going to a corporate CEO?