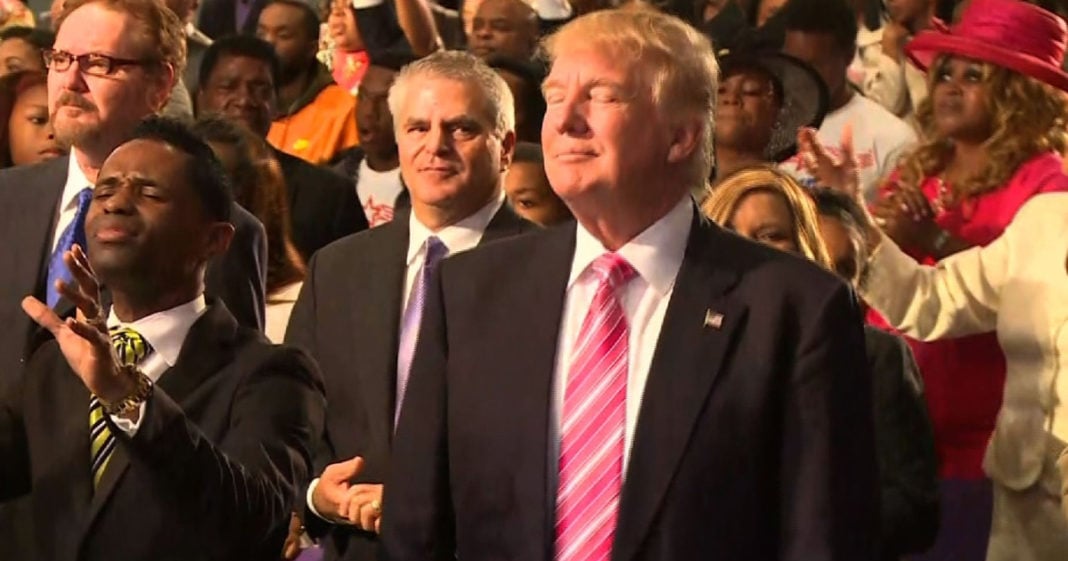 Last week, The Ring of Fire posted an article on how the racists of the United States played a large role in propelling Donald Trump to an office for which he is neither deserving nor qualified. However, there was another factor in his so-called “victory,” which on the surface makes little sense: support from evangelical Christians. According to a poll conducted by the Public Religion Research Institute last fall, nearly two-thirds of evangelical Christian voters supported Donald Trump.

It’s quite a contradiction: a self-proclaimed “Moral Majority” supporting and voting for a man who is an unabashed liar, a serial adulterer, has been married three times, has run an extensive chain of gambling casinos, and in general, is the very antithesis of everything the 1st-Century rabbi known as Jesus of Nazareth stood for, including – and especially – compassion for the poor and the “outcasts” of society (We won’t even go into the business about the camel passing through the Needle Gate or Jesus’ violent reaction when confronted by naked, predatory capitalism).

How do these oh-so-righteous, so “moral” self-proclaimed Christians reconcile their own beliefs with their support for someone like Donald Trump?

There were a few clues. Last year, Franklin Graham, son of 98-year-old evangelist Billy Graham, exhorted the faithful to rally around Trump primarily because he wasn’t Hillary Clinton. Comparing Trump to “flawed leaders” such as Moses and King David, he said,

“There will never be a perfect candidate as much as we would like one…we don’t get to choose between perfect evil and perfect good. We get to choose people that we believe are at least inclined to, open to, have the possibility of doing what is best for our country.”

In other words: all have fallen short of the glory of God – even Donald Trump – and we should forgive his all-too-human weaknesses.

Other evangelical leaders similarly justified their support of Trump, comparing him to Bibilical megalomaniacs such as Babylonian King Nebuchadnezzar or Pharaoh Thutmose II (according to some scholars, the ruler of Egypt during Moses’ time). According to their logic, God uses such “wicked men” in order to carry out his “Divine Plan.”

Beyond this, there were three other dynamics in play, which have to do with the core issues over which Christian evangelicals are most concerned: abortion, gays and their right to impose their religion on everyone else. Even this makes little sense, on the surface: during most his campaign, Trump was a supporter of Planned Parenthood. He also expressed lukewarm support for gay rights, but dodged the issue when questioned by evangelical leaders last year.

Finally, Trump was the only top GOP candidate who would not support the so-called “First Amendment Freedom Act” (FADA), a law that essentially makes it legal for businesses and institutions to discriminate on basis of religion or personal “moral” values.

Then, just weeks before the election, Trump changed his position on Planned Parenthood, vowing to defund the organization. He has appointed rabidly anti-LGBTQ “leaders” to key positions in his Administration, and did a classic bait-and-switch on FADA, pledging to sign it into law. For all his stupidity and ignorance, Trump is admittedly a cunning opportunist – and a master of manipulating low-information voters with narrow agendas.

In a recent piece in Financial Times from retired Baptist minister and history professor Wayne Flynt, he noted that it’s primarily about gays and the “right to life.”

If there is a bright spot to all of this, it is that more reasoned voices are speaking out – and, like many Trump voters, a growing number of evangelicals are starting to realize what a huge mistake has been made. Shortly after the election, Trump critic Russell Moore, president of the Ethics & Religious Liberty Commission of the Southern Baptist Convention, wrote an op-ed in the Washington Post in which he expressed his concern over “the way politics has become a religion, and religion has become politics,” urging his fellow Christians to back away from the politicization of their faith.

Earlier this year, prominent evangelical leaders expressed their opposition to the Trump Administration’s immigration ban and closing the borders to refugees. Not surprisingly, the virulent racism and xenophobia that is part of Trump’s presidency has also created serious rifts between white evangelicals and those of color.

In  a recent novel about an American missionary and his wife living in China during the 1930s – a dangerous period in that country’s history – the missionary is warned about his predecessor, who had “disappeared” after preaching a sermon criticizing the military ruler of the province. The missionary’s response: “Men of God should stay out of political matters.”