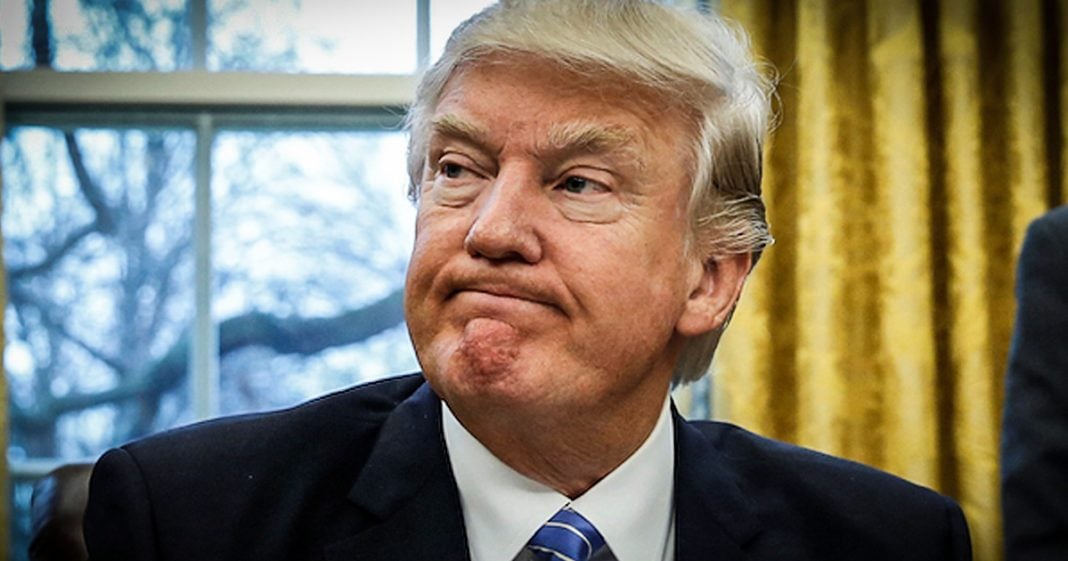 Senior officials at the White House told the press that the President is prepared to shut down the government if he has to in order to get the funding he needs to begin construction on his border wall between the U.S. and Mexico. Ring of Fire’s Farron Cousins discusses this.

If the federal government does not reach some kind of a stop gap compromise by this Friday, as far as the budget’s concerned, the government could shut down once again, just like it did in 2013 when Ted Cruz decided to shut it down, because he couldn’t get his way in repealing Obamacare. But Donald Trump said that if he does not get his funding for this idiotic border wall that he wants to build between the United States and Mexico, that he will absolutely let the government shut down, and let the Democrats take the blame for that, because that’s what he thinks is going to happen. In spite of the fact that the majority of Americans do not want this wall. They do not want to pay for this wall, and Mexico says that they will not pay for this wall, even though the White House, this weekend, said somehow, eventually maybe one day, Mexico is gonna pay us back for this. You’re still pushing it. You’re still pushing this as if it’s something that this country desperately need or we’re all going to die, because that’s what Trump voters think.

They think that if we don’t stop this massive fictional influx of Mexican immigrants into the United states to, as Trump says and they believe, are coming over here to rape and kills us, then somehow America is going to fall. Now, we have functioned pretty well as a country for a couple centuries without a massive border wall between the United States and Mexico, and I think we will continue to survive without one. I think we’ll survive even better if we don’t waste billions upon billions of dollars constructing this idiotic talking point, because that’s what it is. Donald Trump is certainly not the first republican to propose a border wall, and he wont’ be the last, but he is the one who is pushing it more aggressively than anyone else has, but nobody wants it. People in this country do not want it, as a whole. We welcome immigrants. Businesses welcome immigrants. They’re the ones you need to crack down on. If you want to stop illegal immigration, why don’t you go talk to the businesses that are hiring the illegal immigrants to do the jobs that American citizens refuse to do.

And yes, there are jobs that American citizens are refusing to do, and the immigrants are coming in and they’re doing those jobs, so that the United States can continue functioning normally. Now, I know we don’t want to think about that. We just want to go about our lives and think everybody is abiding by the law, and that the people who are out of work is because the immigrants took their jobs, but that’s ignoring the reality of the situation in the United States. The state of Georgia, a few years ago, rescinded one of their Visa programs that effectively allowed farmers to have their fruits and vegetables rot in the fields, because Americans … Georgia citizens would not go out there and pick those vegetables. They didn’t want those jobs. Those were the jobs, specifically that those Visas were allowing those immigrants to come in and do. Farmers lost hundreds of millions of dollars. The price of crop went up, because there was a shortage, because there wasn’t enough people out there to pick them. That’s what happens when you stop immigration into the United States. These jobs aren’t glamorous.

People aren’t hopping that border and coming over here and taking the jobs of heart surgeons. They’re taking low wage, unskilled labor jobs, because Americans simply don’t want them, and that is the reality. But Donald Trump still thinks we need this wall. He thinks we need this wall. He thinks we should spend a couple hundred billion dollars paying for it, and he is willing to shut down the federal government and cost us even more money, in order to get his way. This man is a petulant child, who will stop at nothing, no matter how many people it harms, to make sure that he gets his way, and to make sure that everybody in this country saw him do it. That he’s a tough guy. Nobody talks bad to Donald Trump. “Nobody doesn’t let me get my way. I’ll show you. I’ll stop these federal government programs for a few weeks, while people go hungry, while senior citizens go without heat or electricity because they can’t afford their bills without their government subsidies.”

All because he wants to put a wall that will do absolutely nothing between the US and Mexico. I don’t think there’s too many people left in this country that would actually look at the scenario we’re facing right now, a government shut down in order to pay for a border wall. Not too many people that would look at that and say, “Yeah, that’s absolutely worth it.