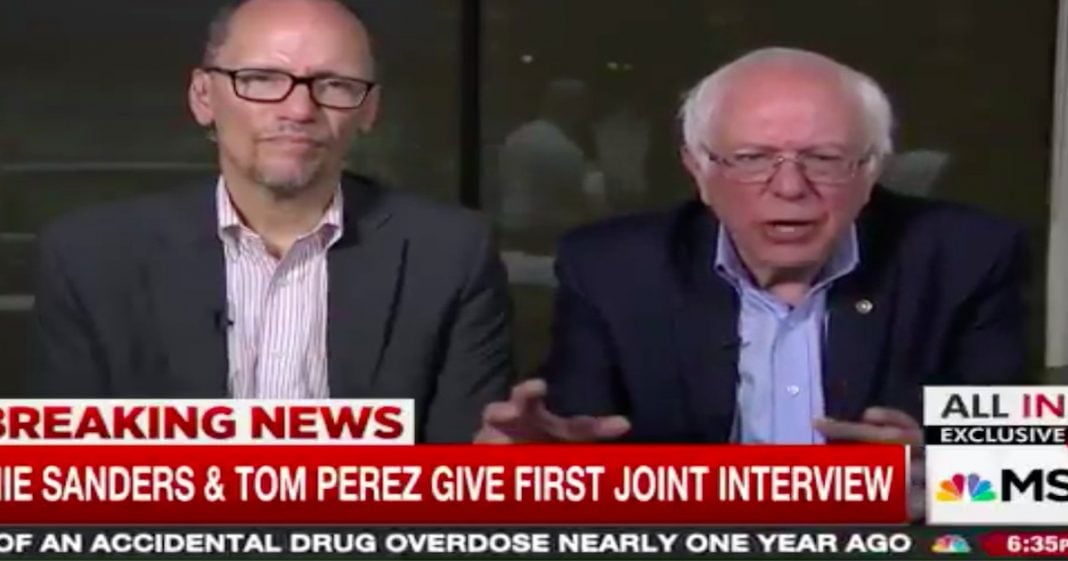 A lack of leadership has led the Democratic Party’s favorability to continue a downward trend. Under the new leadership of Tom Perez, the party has failed to rally any additional support and has abandoned viable candidates in key special elections.

Even as Perez joins the more-popular-than-ever Bernie Sanders on a nationwide “Unity Tour,” party divisions are widening. As the tour kicked off, Sanders was asked if he considers himself a Democrat on MSNBC. His answer did not lend itself to much unity:

Yes, there are differences in policy, with Bernie carrying a much more progressive platform than the bulk of the party. However, policy was not the sole reason that Bernie engendered such passion from his supporters.

Sen. Sanders spoke out against the established order of Washington, DC. Much like Trump, Sanders identified that most Americans feel that their government has failed them. The Democratic Party has been hesitant to admit the corruption in Washington, because it would smear so many of their own party members.

When Sanders blasted the “ruling class of this country, the billionaire class and Wall Street,” Perez would only blame Trump.

According to historian Bruce W. Dearstyne, the current failures of the Democratic Party are very similar to the issues the party faced in the 1950s. In his piece, “Six Strategies To Revitalize the Democratic Party,” Dearstyne says that to remedy a lackluster showing in 1952, Democrats started to focus on key issues that mattered to their voting base, like labor rights and the minimum wage. They also planned out a new platform, based on Adalai Stevenson’s “New America.” New ideas published in public position papers, backed by the DNC, gained great media attention and rejuvenated the party. These actions eventually led to John F. Kennedy’s election in 1960.

However, instead of putting forth new ideas, the DNC continues to be vague and uninspiring. In the MSNBC interview, Tom Perez was hesitant to commit to any particular policy. As Bernie championed “Medicare for all,” Perez merely talked about “inclusion and opportunity.”

This vacuum at the top of the Democratic party has cast the opposition of the GOP into a chaotic and unhinged protest devoid of substance. Yes, Trump and the GOP are headed down a terrible path. Yes, we must challenge them.

However, the best way to do that is with new and better ideas. Without new ideas, we are left with hatred, division, and as evidenced by the recent protests at Berkeley, violence. However, new ideas are not likely to come if a party cannot accept the most popular face of the movement, while refusing to hold the corrupt portions of the party accountable.