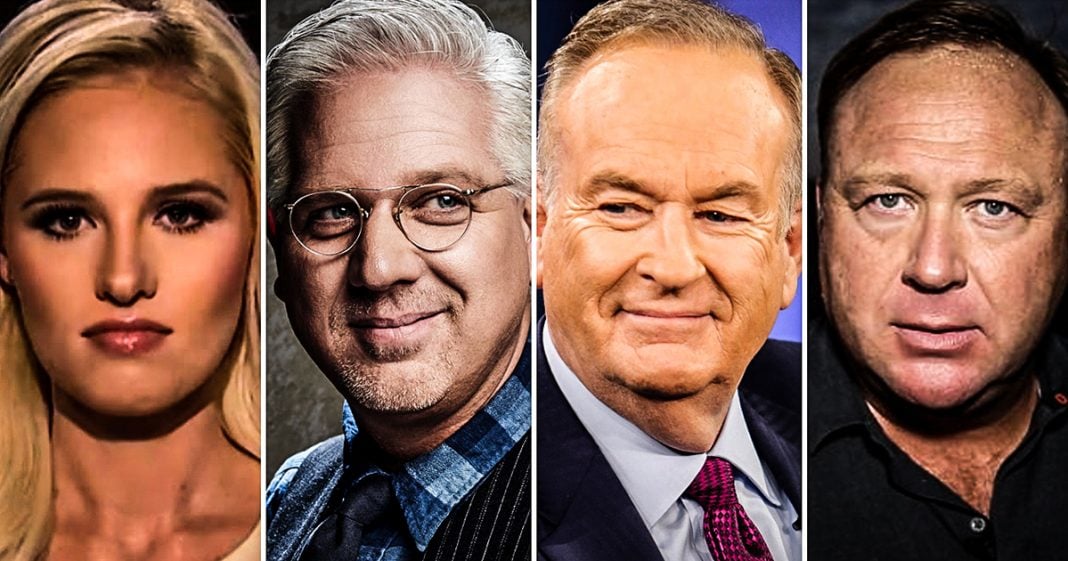 Tomi Lahren is suing Glenn Beck and he’s suing her back. Alex Jones is in the middle of a bitter custody battle that is causing all sorts of weird stories to emerge about the right wing conspiracy theorist. More women have come forward and accused Bill O’Reilly of sexual harassment and now Fox is considering firing him.  Add all these up and it paints a very clear picture: Right wing hate talkers are imploding, and that’s great news for America. Ring of Fire’s Farron Cousins discusses this.

If you’ve been paying attention to conservative media for, I don’t know, the last week maybe, you understand that something very weird is happening with a lot of very prominent conservative hosts. First of all, you have Tomi Lahren, who’s suing The Blaze for firing her. Then you have Glenn Beck and The Blaze who are counter-suing Tomi Lahren, saying that the reasons they fired her had nothing to do with her abortion comments, it has to do with the fact that she’s a rude, hateful person, and nobody liked her. On top of that, according to The Blaze, she actually turned down a bunch of advertisers for her show for no apparent reason, costing the group, The Blaze a lot of money. That’s just one little piece.

We also today, have yet another woman coming forward and accusing Fox News host Bill O’Reilly of sexual harassment. Now, as we all know right now, Bill O’Reilly is on his vacation, as he calls it, something he said he booked a long long time ago, many months. Last year is booked, has nothing to do with all this horrible stuff happening. Well, late last night and end of the day, stories started breaking saying that Fox News and Bill O’Reilly are actually in talks on how to separate from one another. Basically, they’re talking about some kind of severance package for Bill O’Reilly, because it’s very likely that this guy is about to be fired. Now, that’s not even all of it.

We also have Alex Jones who’s going through one of the weirdest custody hearings that I have ever heard of. Things are coming out, specifically Alex Jones’s attorney saying that nothing he says on his show is real, this is performance art, he doesn’t believe this. Then Alex Jones has to come out and say, “No no no, I do believe this. This isn’t a performance,” countering everything his attorney just told him in court. Then you have these reports coming out in the court logs saying that during family therapy sessions, Alex Jones stripped his clothes off. He also couldn’t tell you what grade his children were in, and he blamed the fact that he didn’t know that on the bowl of chili that he had for lunch that day.

I don’t know about you, but all of this insanity happening in the conservative media right now, with people getting fired, people suing each other, people’s horrible weirdo lives being exposed. I absoluteness love this, because every single one of these people that I have talked about are absolute poison in the United States. They are a cancer on the media. Alex Jones, Bill O’Reilly, and Tomi Lahren, and Glenn Beck, they provide nothing of value for the American public. They’re not out there reporting the truth. They’re not giving you honest reporting. They’re giving you insane conspiracy theories and right-wing talking points that are complete lies. There’s no other way to put that. When you see these headlines about another Alex Jones secret that’s come out or poor Bill O’Reilly may lose his job or Tomi Lahren still can’t find work, don’t feel bad for these jerks. These people have destroyed this country. They have dumbed down the American populace, and they’re all finally getting what they deserve.