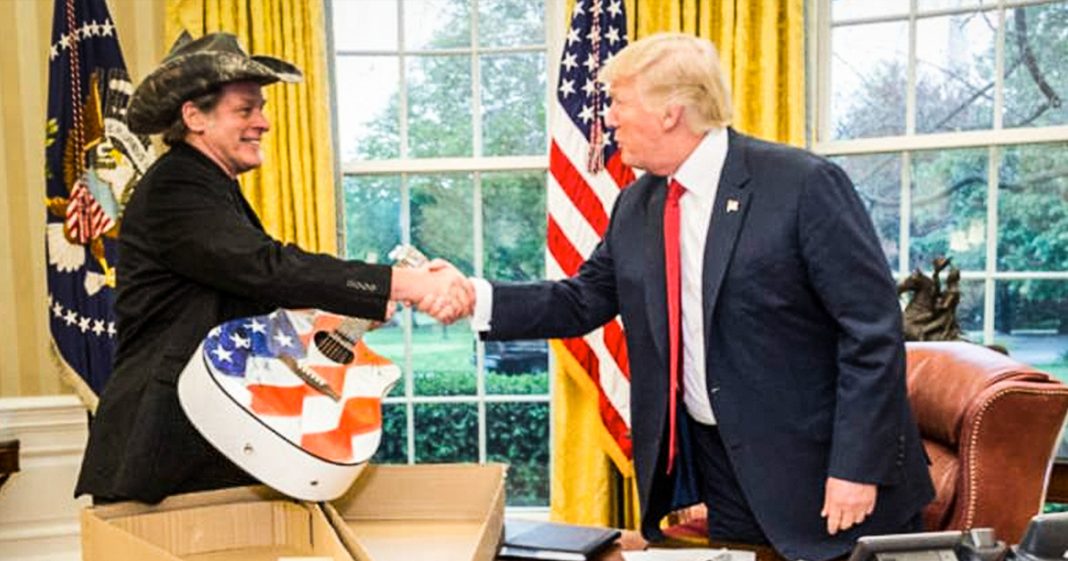 Sarah Palin, Kid Rock, and Ted Nugent walk into the Oval Office…No, that’s not the start of a bad joke, it’s the sad reality that we’re living in today.  Donald Trump welcomed the white trash brigade into the White House this week, glossing over the fact that Ted Nugent literally threatened to kill President Obama and Hillary Clinton and was actually investigated by the FBI for those statements. Ring of Fire’s Farron Cousins discusses this.

So tell me if you’ve heard this one. Sarah Palin, Ted Nugent, and Kid Rock walk into the oval office, Donald Trump’s sitting there. Actually sorry, that’s not a joke, that’s literally what happened earlier this week. For some reason the white trash trio was invited to have a private audience with the President of the United States, during which they took a picture of themselves with a portrait of Hillary Clinton. Sarah Palin making her usual weirdo face, as if she’s so disgusted to be by this picture, but just had to get it so she can throw it on her Facebook and get her half wit audience all riled up.

But listen, Ted Nugent is the biggest problem here. We know Kid Rock, eh whatever, Sarah Palin, not very bright, but they’re friends. But Ted Nugent is the man who literally threatened to kill President Obama and Hillary Clinton. A threat that the FBI and Secret Service took seriously, and began investigating this man. Yet, Donald Trump saw fit to bring him into the oval office and have a private audience with him, just sit down and chit chat. A man who threatened to kill a sitting president. Do you think that’s appropriate?

I mean, regardless of what Ted Nugent is, when you threaten to kill the President, you’re supposed to be in jail. That’s how it works. He called for the public execution of Barack Obama and Hillary Clinton. He shouldn’t be getting a private audience with the President of the United States. Furthermore, why would anyone want to meet with Ted Nugent? Oh, because you’re a huge fan of his music? You know by definition, Ted Nugent is a one hit wonder? Because he only had one song that ever made it up the charts. Sarah Palin is a half term failed governor, failed reality show star, failed Fox News analyst. Kid Rock, I don’t even know where to begin with him. He couldn’t make it as Limp Bizkit rip off, so now he’s doing country music, where all he’s doing is taking other people’s music and putting different words on top of it.

You’re talking about the three least talented people in any form of media ever, meeting with the most inept president we have ever had. You know, the four of them actually do fit together pretty well. They’ve all somehow managed to fail upwards, to get into the position that they’re currently in. But to see the four of them sitting together, smiling, laughing, talking in that oval office, that office where so much important American history lies, is disgusting, and is a disgrace, and a slap in the face to every other president that came before Donald Trump. Kid Rock, Sarah Palin, and Ted Nugent have no business being in that office, and to be honest, neither does Donald Trump.