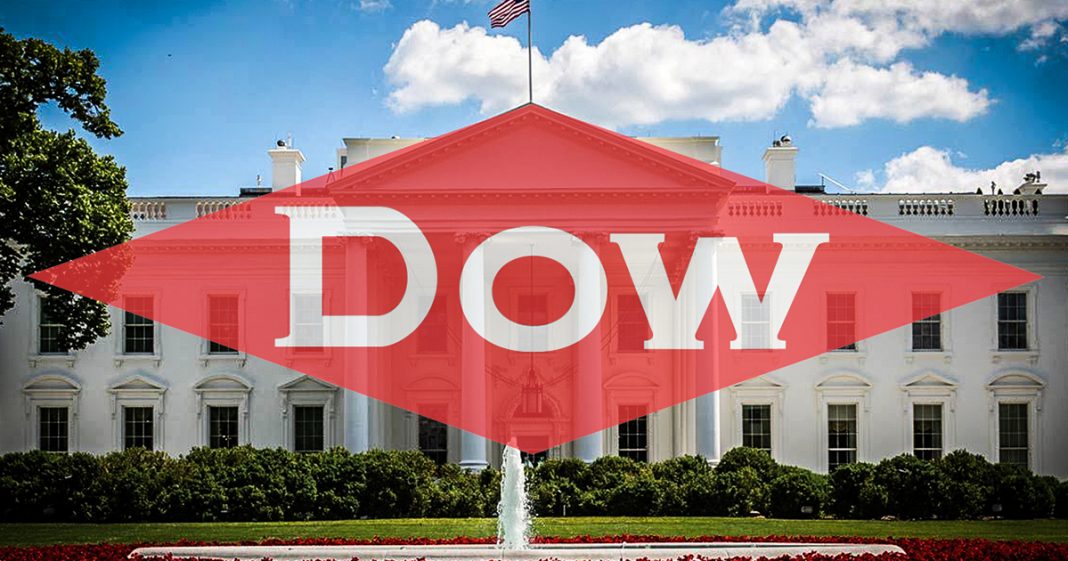 Dow Chemical gave $1 million to help pay for Donald Trump’s inauguration, and now they’re hoping that the administration will return the favor by ignoring all of the studies showing that the pesticide chlorpyrifos is toxic to both human beings and animals. Ring of Fire’s Farron Cousins discusses this.

A few weeks ago the Environmental Protection Agency announced that it was going to go ahead and allow companies to use a pesticide known as chlorpyrifos, which is manufactured mostly by Dow Chemical. Now this move came after decades of arguments within the agency after looking at information showing that this pesticide was harmful to animals, was harmful to the environment, and it was harmful to human beings. Basically, any living thing, plant, animal, human, whatever that came in contact with this stuff, suffered very serious, negative side effects.

But here’s the thing. Dow Chemical, a few months ago, during Trump’s inauguration, gave one million dollars to the Donald Trump Inaugural Fund. They helped plan the party. On top of that, the president and CEO of Dow Chemical is actually one of Donald Trump’s closest advisors. Of course, the EPA is going to go ahead and throw away decades worth of science to promote Donald Trump’s friend, who gives him lots of money.

Here’s the thing. Of the 1800 different animal species that this pesticide was tested on, every single one of them showed negative detrimental side effects, showing that this thing causes tumors, causes cancers, causes abnormal growth. Every single one. In the human studies that were conducted, children exposed to even a tiny amount of chlorpyrifos were shown to have abnormal brain development afterwards. Essentially, this stuff screws with brain development in children and ruins their entire lives. All it took, after decades of science showing this, was one million dollars.

I mean Dow Chemical is a multi-billion dollar company. They only had to spend one million to buy Donald Trump and Scott Pruitt, the head of the EPA? What a bargain, right? Because now this chemical is going to be sprayed on all of us by the gallon. This is going to cause enormous side effects in the human population, in the environment, in animals, in anything that comes in contact with it. Dow Chemical knew that and now they’re asking the EPA to, “Please go ahead and set those studies aside. Ignore them, because we, Dow Chemical, think that they’re flawed. Not that they are, but we think they are, and we’re giving you money. We’re in the President’s ear every day, and we’re going to get this shit approved so we can start dumping it from coast to coast in the United States.”

That’s how democracy works folks. You got a million dollars? Hey, great. Give it to a politician, and you can start dumping poison on everyone in this country.