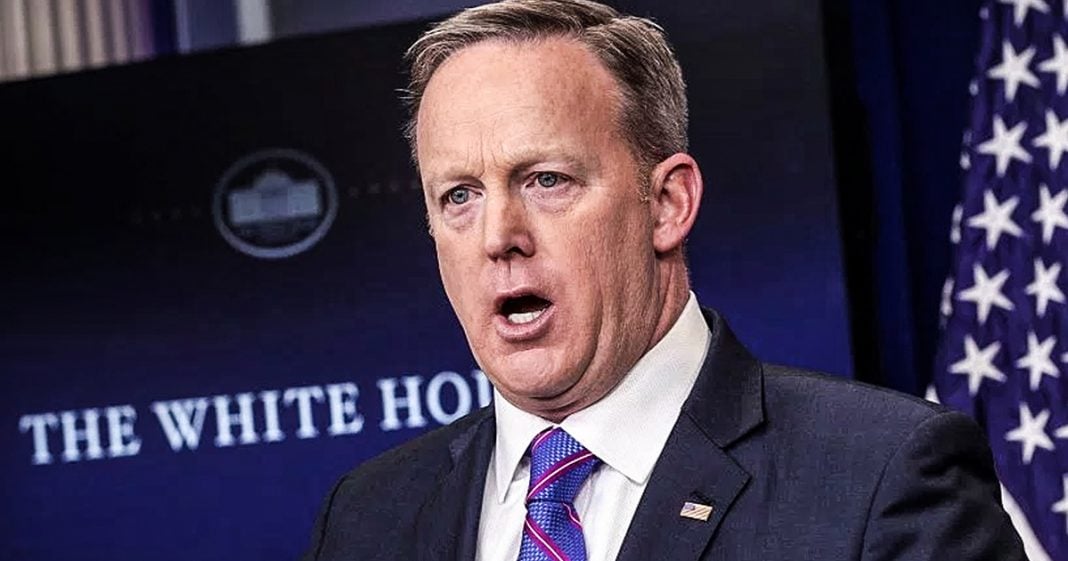 During Wednesday’s press briefing, White House Press Secretary Sean Spicer was asked about Trump’s accomplishments during his first 100 days, and Spicer couldn’t come up with a single legislative accomplishment from the President.  He did, however, point out that there’s still a few days before we hit that 100-day mark, so anything can happen. Ring of Fire’s Farron Cousins discusses this.

We’re a little more than a week away from Donald Trump’s 100-day mark of his time in office as the President of the United States. Yesterday during the White House press briefing, Sean Spicer was asked point-blank, “What do you think Donald Trump’s biggest legislative accomplishment has been in these 100 days? What kind of accomplishment should he be boasting about to the public?” Sean Spicer could not answer that question because I guess according to Sean Spicer, Donald Trump has accomplished approximately nothing since becoming President of the United States. Now, Spicer did talk about some of Trump’s executive orders, you know, I guess the ones that weren’t overturned by federal judges, but George Condon, the man who asked the question, specifically said not including executive orders, so Spicer couldn’t even get that correct.

Basically what Sean Spicer’s failure to answer was that Donald Trump hasn’t done anything legislatively. Yeah, he signed a lot of executive orders but he doesn’t have to get congressional approval from that. The question was basically meant to ask how is Donald Trump working with the Republican-controlled house, the Republican-controlled senate, and the people of the United States. The answer is that he isn’t. Right now, not even right now, we’ve seen this since Donald Trump took office, he’s been fighting with various factions within the Republican controlled house and senate all throughout his almost 100-day Presidency. Nobody is getting along with anyone inside of Republican world and, in fact, about the only legislative accomplishment Donald Trump has had in these past 100 days is when he signed the bill that was cutting Title X funding, which is basically the Republican plan to de-fund Planned Parenthood and strip millions of low-income women their health care coverage. That is the only thing Trump has done legislatively.

Yeah, he’s got executive orders, yeah, he got Neil Gorsuch through to the Supreme Court, but he has not worked with congress on anything other than the health care bill, which turned out to be a complete and total disaster for the President.

When Sean Spicer dances around a question about what are Trump’s accomplishments, it’s not because he wants to list all of these executive orders and other things. It’s because he doesn’t have anything to talk about. Now, Spicer did tell us that, hey, we’re not done yet. I mean, look, we got a little over a week. Anything could happen. I guess maybe that’s true. Maybe Donald Trump can work with congress and get something passed. Anything. This guy came into office with dozens of promises, things he was going to do on day one. Things he was going to do in week one. Things he was going to do in his first 100 days. So far, aside from his failed executive orders restricting Muslims from entering the United States, he hasn’t done anything.