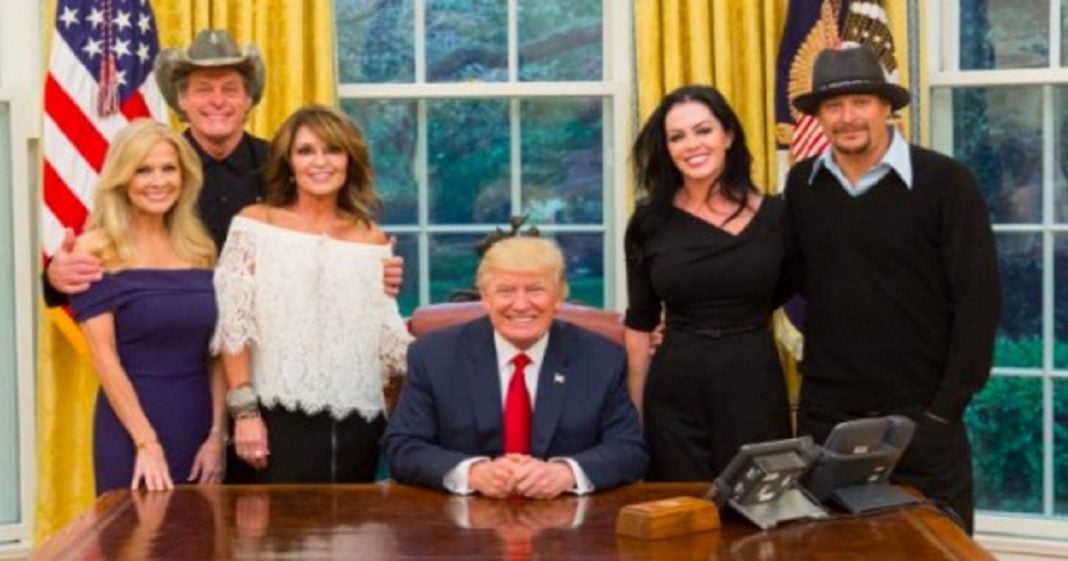 It sounds like the beginning of an offensive joke, but it’s more like an offensive mark against Democracy – This week, political nut Sarah Palin took an intimate tour of the White House accompanied by Ted Nugent and Kid Rock.

Palin was the guest of President Trump for a Wednesday night dinner, and when she was told to bring some friends, she interestingly chose the two musical artists.

Palin’s reappearance in Trump’s life is not unexpected, despite the fact that he clearly discarded her during the Republican primary. While Palin was eager to ride Trump’s coattails, a handful of unhinged media appearances in which she slurred gibberish meant that she was quickly put out to pasture – too loony, even for Trump.

Now, Palin has reappeared at the White House, likely angling for an ambassadorship or other mid-level federal position. Hopefully whatever scraps Trump throws to the former Alaskan Governor will keep her far away from the American people.

In addition to Palin, a relatively unsurprising choice for a White House guest, the accompaniment of country rock musician Kid Rock and basically one-hit-wonder Ted Nugent was, at best, bewildering.

Considering that Nugent has repeatedly called for Obama’s execution and has called him a “subhuman mongrel,” that he is allowed to step foot inside the White House is a clear sign of the times.

The three appeared to have a grand time at the White House, posing with Donald Trump and mocking a portrait of Former Secretary of State Hillary Clinton. For their meeting with the President, Nugent wore his customary cowboy hat while Kid Rock donned a fedora of sorts – M’president.