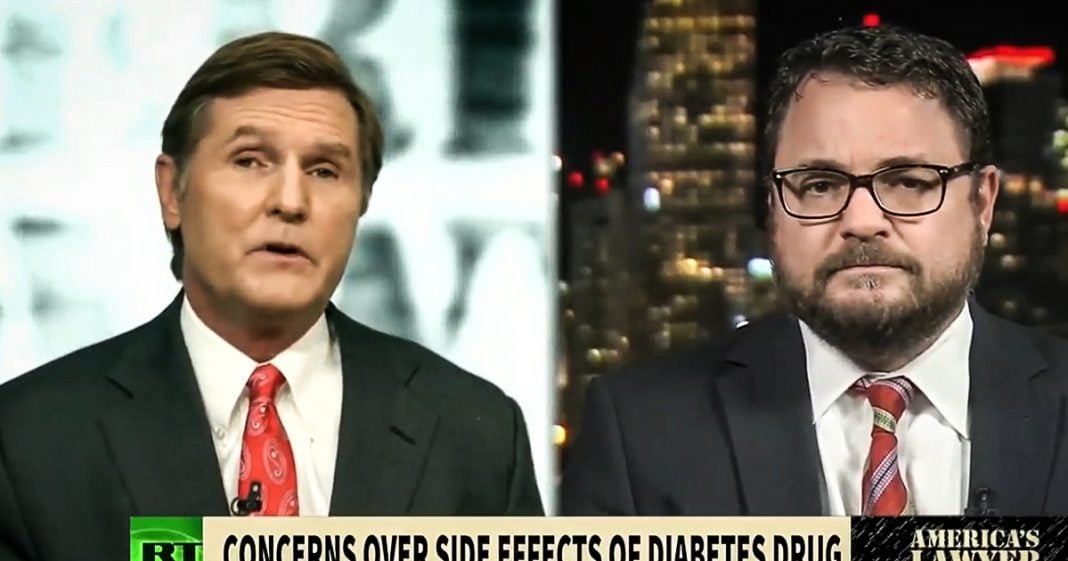 According to latest data from the Centers for Disease Control, more than 29-million Americans suffer from diabetes, and nearly one of four people with the disease aren’t even aware that they have it. Even worse, as many as 86-million Americans currently suffer from pre-diabetes, and if preemptive measures aren’t taken they too will be diagnosed with full blown diabetes in a matter of years. With so many people suffering from both type one and type two diabetes, Big Pharma saw an opportunity to make a huge profit. In the rush to cash in on the diabetic epidemic they cut corners. They created a product that’s causing as much harm, if not more, than the actual disease itself. That product is called Invokana.

Papantonio: According to latest data from the Centers for Disease Control, more than 29-million Americans suffer from diabetes, and nearly one of four people with the disease aren’t even aware that they have it. Even worse, as many as 86-million Americans currently suffer from pre-diabetes, and if preemptive measures aren’t taken they too will be diagnosed with full blown diabetes in a matter of years. With so many people suffering from both type one and type two diabetes, Big Pharma saw an opportunity to make a huge profit. In the rush to cash in on the diabetic epidemic they cut corners. They created a product that’s causing as much harm, if not more, than the actual disease itself. That product is called Invokana.

Invokana was developed by Janssen, an offshoot of Johnson & Johnson. Unlike other diabetes medications that are designed to help the body produce more insulin to metabolize sugar, Invokana actually forces the body to filter sugar out of the blood by the kidneys and then the sugar is expelled as waste. As a result of that the body loses carbohydrates that it needs to function. The kidneys become overworked and could eventually shut down, and the body goes into a form of survivor mode where it begins to break down body fat to compensate the loss of that sugar. The condition is known as Ketoacidosis. It’s deadly.

Diabetic Ketoacidosis occurs when the body begins to break itself down for energy, and it creates a dangerously high level of acid in the bloodstream. This condition is extremely painful and the patient can end up losing control over their bodily functions, their kidneys could shut down completely and they can die.

On May 15th, 2015 the FDA warned consumers about the increased risk of Ketoacidosis from Invokana, so Janssen was put on notice that their medication was extremely dangerous for patients. This wasn’t the first time the FDA had expressed concerns over Invokana. The drug was approved in 2013, and it was only approved by the FDA by a margin of one vote. Members of the approval committee were concerned about the safety of the drug, but they voted eight to seven to put it on the market anyway. Janssen wasn’t about to let their cash cow go away. After all, the drug was pulling in more than one-billion dollars a year for the company.

They tried to use Ketoacidosis in their favor telling doctors that patients might even lose weight if they take the drug. In other words, they told patients that this disease was good news, really. They didn’t bother to tell doctors that the weight loss was due to the fact that patients’ body would begin metabolizing itself in a horrendous way. All Janssen saw were big profits, and those dollar signs always trump the warning signs.

Joining me now to talk about Invokana’s story is Tim O’Brien, the first attorney in the United States to file a lawsuit on behalf of Invokana victims. Tim, start by telling us how Invokana is different from other forms of diabetes treatments. What’s odd about this one?

O’Brien: What’s odd about this is if you look at a patient who has received no treatment at all, has full blown diabetes, is in a diabetic crisis mode, that’s what this drug mimics. Most diabetes type two drugs actually metabolize, that is use the body’s own insulin to actually eat up, to digest the sugar. This one doesn’t. As a result, the patient who takes the Invokana is put into a crisis mode. If I were a diabetic and I received no medication and I was undiagnosed, my kidneys would pee out the blood sugar. That’s exactly what this drug is designed to do, is to use an emergency mechanism, a mechanism which is only designed to be used for a few months and then you’re going to go into a bad situation, rather than actually use the carbohydrates as an energy source. Instead, because the carbohydrates cannot be used as an energy source, the body has to cannibalize itself. Not only does it eat its own fat, it eats muscle.

Papantonio: Okay, Tim, let me make a point. First of all the manufacturer knew that these were problems before it went to the market. That’s something we probably can agree on. They knew it was a problem. The FDA knew it was a problem on this marginal vote, but the FDA lets it go anyway. They understand that this is a whole new concept on how to treat diabetes. What is your take on why the FDA again just let things go because the pharmaceutical industry wanted them to? What’s your take on that?

O’Brien:
I think it’s all part of PDUFA, which is Prescription Drug User Fee Amendment Act. Way back several years ago you recall that the pharmaceutical companies had to start writing prescriptions, that is actually writing checks to have their drugs approved. Now the FDA regards the pharmaceutical companies as its client. They have to get drugs to market within a certain time, otherwise the FDA is punished. Here you have Janssen trying to create “the better rat trap” when there have been for 30, 40, 50 years very effective type two diabetes medications. They pressured the FDA to release this onto the market even with this information in hand.

Papantonio: Tim, this is another one of those situations where the pharmaceutical industry invents this medication. They have to find a way to market it. This medication is not even necessary. Can we agree on that, that a person out there taking this doesn’t even need it because there are all types of alternatives? Did I state that right or is there another angle to that?

O’Brien: Oh, no. Absolutely, there are so many different types of medications out there for type two diabetic patients. They could go on Metformin, they could go on Glucophage, things have which been tried and true for decades. The pharmaceutical industry, because this is the largest group, this type two diabetic group is the largest pill taking market out there, the pharmaceutical industry is not going to stop trying to invent the better rat trap. Instead of using things like it has normally done, which is metabolize the sugar, now they’ve run out of the metabolic options and are going into the emergency mode of action options such as the Invokana mechanism.

Papantonio: Tim, when you filed this lawsuit there were certain things that you knew about the physiology of all this that certainly the company had to know. When the kidneys are forced to go into this emergency mode and they jettison sugar from the body, what happens to the organs? The kidneys are among some of the most fragile organs in the body. What happens when this occurs?

O’Brien: Two things. Number one is this is the only type of drug that is by design organized mechanically so that large amounts of blood sugar actually enter the kidneys. It goes into tubules in the kidneys, which are very, very delicate tubes which are meant to filter normal waste, not this amount of sugar. The second thing is in order to flush all that sugar from the body, the body has to dehydrate. It actually extracts water from the cells in order to create the urine to create the strain through which all of this excess sugar can be evacuated. Two things happen. Number one, a large amount of sugar is entering a very fragile organ. Number two, the kidneys start shutting down on an acute basis because they start getting dehydrated. They lack the medium, that is the water, to get the actual sugar out of the body.

Papantonio: Okay. Let me back up now. Again, the FDA was aware of that when this product was put on the market. They understood what could happen to the organ systems. The manufacturers certainly understood. Nevertheless, the FDA by a margin of one vote says, “Yeah, we’re going to take the risk.” Now on top of that, tell us the story about the manufacturer, Janssen, going in and telling the public, “Gee, it’s a good thing. It’s a good thing that your body is wasting away because you’re going to lose weight.” Tell us how ugly that kind of argument was weighed. I mean, how do you get anything more bizarre than that? It’s a disease.

O’Brien: It is the most damnable thing. Here you got an emergency mechanism, literally cannibalizing yourself, eating your own muscle, eating your own fat because it’s not converting carbohydrates to energy. In a totally off label maneuver Janssen says, “You know what, you may lose weight”, as if this is a good thing. You may lose weight because the body is metabolizing itself, it is cannibalizing itself. The FDA knew this would happen. This is a tried and true symptom of diabetic Ketoacidosis when you have unexplained weight loss, and that’s exactly what it was resulting. The body metabolizes itself and so you lose both muscle mass and fat. As a result, they are claiming it has an unintended benefit of taking the drug.

Papantonio: This disease process that’s caused by Invokana, the drug company sees that they have to put a positive spin on it, when they should be pulling the drug from the market. Again, it’s not a necessary drug. There are many things that you can treat diabetes with. They take this negative, they have the facts, then they have their marketers turn that negative on its head and tell people, “This is great, you’re going to lose weight. Oh, by the way it might kill you.” Has there been any repercussions at all from the Justice Department or anybody in regard to that kind of representation to the public?

O’Brien: No. There has been no DOJ action at all. However, obviously the private attorney’s general, people like you and me who represent folks who’ve been injured by the wrongdoing of companies such as Janssen, we have formed a multi district litigation in the district of New Jersey to bring justice to these folks and actually reveal to the world the sheer fallacy of this mechanism, this bad design drug. It’s my prediction, Mike, that within three to four years this drug is going to be boxed up through a black box warning that’s going to render it a nullity. Right now, Janssen is riding the blockbuster status that it has got and it’s making almost two-billion dollars a year on it.

Papantonio: Okay. Again, Tim, we see that the drug industry trumps safety because they’re making billions of dollars a year and nothing has changed here at all. Thanks for joining us. We’ll keep up with this story. I think it has just begun actually as I listen to you talk.