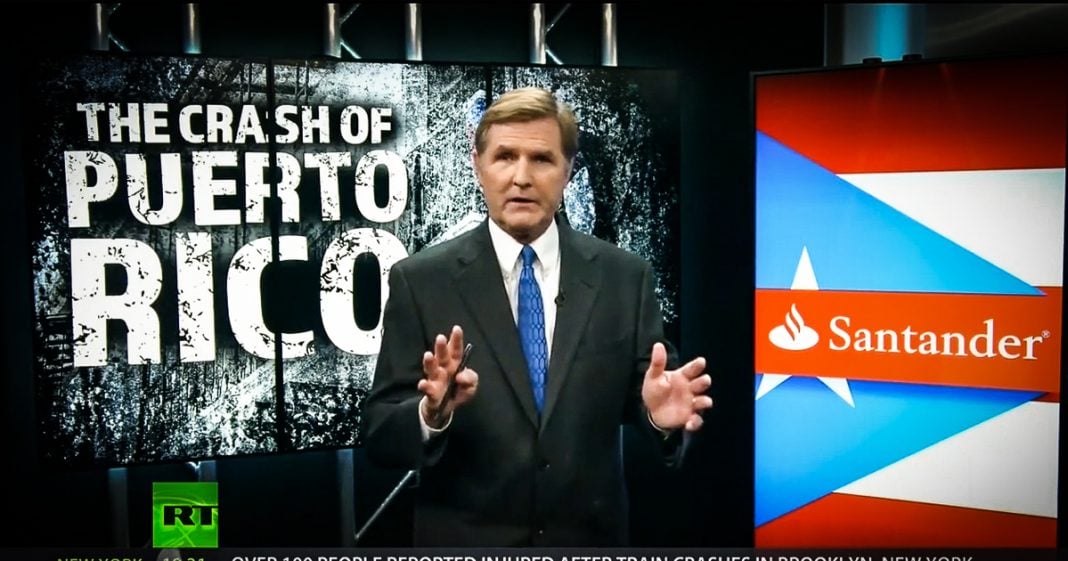 Via America’s Lawyer: Mike Papantonio exposes Santander Bank for defrauding investors in Puerto Rico through a massive municipal bond scheme. Mike also talks to attorney Peter Mougey about how Santander was able to pull off this scam and why no one was sent to prison as a result.

Papantonio: Corporate media, such as NBC, CBS, and ABC is focused on the fact that Puerto Rico is now experiencing a 70 billion dollar debt crisis. What they spend far less time talking about is the fact that America’s Wall Street was the major engine for that 70 billion economic burn down and they failed to mention the way that effects US taxpayers who are directly and indirectly responsible for having to pay for that cleanup. It’s another Wall Street catastrophic disaster right upon us. It’s not complicated. Securities firms like Santander, which is the 20th largest bank in the world, joined with Wall Street to knowingly and intentionally pull off massive fraud by selling their worthless junk bond inventory on the open market to mom and pop investors all over the island. Santander absolutely knew that they were holding high risk junk bonds that they needed to get rid of in order to maximize their personal profits and save the company from massive losses. That’s what it was about.

What that company did down in Puerto Rico effects US investors in a very real way, because all securities and bonds connected with Puerto Rico are going to be effected by all of the island’s defaults. Already, the island’s credit rating has been reduced to what they call junk on the open market. What these bankers did was place Puerto Rico and their economy into one of the worst recessions in its history. In fact, as of today the poverty rate as a result of unemployment, rising debt has created a poverty economy that’s actually double that of Mississippi. As Puerto Rico plummeted into this economic abyss its issuance of municipal debt skyrocketed. Global banks, such as CitiGroup, Goldman Sachs, and Merrill Lynch all made enormous profits from the bank driven economic disaster. This document, along with dozens of others, shows you the picture.

“We are f’ed,” that’s what they said. It’s what management said when they ordered their people to sell high risk bonds to mom and pop investors. Sell the worthless bonds anyway or “go look for another job,” that’s what they told their employees. They knew they were worthless. The global bankers knew of the drastically increased risk coming at them the same way that they knew the problems when they cost the US economy trillions of dollars in 2008. Except, in Puerto Rico, the banks took their exposure to almost zero before the disaster. Make no mistake, banker business decisions like that take place on a routine basis here in the United States, but no one went to jail in 2008 here in the United States, no one was even seriously investigated for that fraud that took place in 2008 and because of the that, global bankers moved on to pillage mom and pop investors in Puerto Rico.

Joining me now to talk about the latest Wall Street atrocity is attorney, Peter Mougey. Peter, why can’t Santander … Why can’t they sell its own inventory and prevent losses without creating this criminal enterprise? I don’t know how to describe it, it looks like just the edge of something that would be considered criminal in a lot of places. What’s your take on it?

Mougey: Well, most businesses it would be common sense. Number one, you can’t tell your own investors that the bonds are safe, the bonds are conservative, the bonds are appropriate for older elderly clients needing income, but then internally discussing that the risks are off the charts, the risks are increasing dramatically, the losses are inevitable, we have to get this stuff off our books. Santander had a plan internally to take their own exposure to zero without telling their own clients about the problems that were coming down the pike and told them they were safe. That’s problem number one. Problem number two, it’s called front-running and it’s a securities term meaning in a liquid market, like Puerto Rico, where there’s not … None of these bonds are traded on an exchange, or the funds aren’t traded on an exchange. Santander knew that if they dumped their inventory before their clients, the price pressure caused by the sales wouldn’t be bore by the Santander, by the bank, it would be born by the clients. They front ran, meaning they sold their bonds ahead of the client because they knew the prices would get driven down.

Papantonio: Got it, got it. Peter, now here’s the question that bothered me about the 2008 Wall Street crash that was driven by Wall Street banks, no question in my mind about that. Here’s what I’m wondering, has there been any investigation from a criminal standpoint into these people? I mean, do we just let them get away with it, or is anybody on the ropes for maybe going to jail for this?

Mougey: I mean, Pap, once again the theme of these stories, whether it be 2002, 2008, and the current fiasco in Puerto Rico is, fraud is cheap. The individuals aren’t being held accountable. Even worse, the firms, the fines are slaps on the wrists. There’s billions of dollars in profits being made with fines that pale in comparison to the type of profits that are being taken. It’s a joke, fraud’s cheap.

Papantonio: Well isn’t it just a cost of doing business? You commit the fraud, you make several billion dollars, and then you pay some ridiculously small fine that, by the way, taxpayers end up paying, don’t they? Because they pass that fine onto the taxpayer. What I’m wondering here-

Mougey: The taxpayers are the …

Papantonio: Is why is this a story that effects the US issues as well? This isn’t just about Puerto Rico is it?

Mougey: No, it’s not. The Puerto Rican bonds are held in mutual funds held in the mainland. A lot of the mutual funds on the mainland hold material parts of the Puerto Rican bonds, but most importantly Pap, you’ve got the commonwealth in Puerto Rico that now can’t pay for its essential services because of this model. Which means, borrow more money to pay off the budget shortfalls and the budgets they couldn’t pay year, after year, after year and over time the amount of bonds that were issued are unsustainable. Guess who’s going to end up paying for the bailout, just like we did in the mainland? Puerto Rico can’t pay for garbage, they can’t pay for police, they can’t pay their teachers, they can’t pay essential services, and they can’t pay the bonds. They’re starting to default. This is ultimately going to get placed on the shoulders of mainland taxpayers, no doubt about it.

Papantonio: Right now, again, I keep coming back to this because it seems like one man with a briefcase can steal a heck of a lot more than a man with a gun on the street nowadays. Because when they steal, they steal billions, billions are lost. What I just don’t understand Peter, and I know you specialize in this, you’ve done it your entire career, you’re absolutely one of the best in the business, and maybe you can help me with this. Why aren’t people thrown in jail for this? Give me the reason if you know what it is.

Mougey: It’s too complicated. The regulators are always a day late and a dollar short. When I say it’s too complicated, the man with the briefcase, the way they do it takes a sophisticated trial team. For example, some of the litigation we’re doing in Puerto Rico right now, 9 million pages of documents. The regulators don’t have the manpower, they don’t have the sophistication to try the cases, they’re having trouble when they try the cases. Even on the civil side, God forbid the criminal side, which has a higher standard of proof. They need more resources, they need the kind of trial lawyers that can try these cases and win. At the end of the day, the regulators are scared to try the cases, they’re scared to sit there at the end of the day because they know they can’t win the cases with the resources and the trial lawyers that they have.

Papantonio: Did regulators in this case have knowledge about these problems and these conflicts of interest even before the decline started? If they did, what did they do about it?

Mougey: 9 million pages in one of these product cases, we know without question that these firms knew that there were problems in Puerto Rico to the point where they had action plans and PowerPoints that they implemented within the firm to take their own exposure down to zero while their clients are left holding the bag. That’s where the parallel track is with 2008. These conflicts of interest, the firms shifted the risk to their own clients, so the clients bore the weight of the losses. These are mom and pop investors that have lost life savings, while the firms took their exposure down to zero. Santander got rid of their entire inventory of Puerto Rican bonds before the decline, took them to zero, and didn’t incur the losses while they left their clients holding the bag and most importantly, never told them about the risks that they’d identified. Without question, they knew.

Mougey: I have handled over 3,000 cases. I have never seen the kind of evidence in that transcript where you had a chairman of the board go in front of their own sales force and tell them, “If you don’t sell these bonds go home, find another job.” Told them, “This is the product I want you to sell.” Why, Pap? Because the inventory was on their books and they wanted to dump the inventory on their own investors, so the chairman of the board came in, in very, very disgusting vulgar language and told them, “Sell these bonds. Get rid of these funds. This is the product you want to sell to your own clients.” That’s after the financial advisors came up with a list of concerns. They said, “We don’t want to push this stuff anymore.” They were told, “Sell it or go home.”

Papantonio: We saw the same thing in the United States in 2008, didn’t we? You handled a lot of cases out of the 2008 burn down. We saw exactly the same kind of conduct where you had banks that knew that they were getting ready to go under and they were selling junk anyway. What is your take on that?

Mougey: What we’ve done Pap is it’s called, Self-Regulatory Organizations, SRO’s, and we’ve essentially told these firms that you can regulate yourself. It doesn’t work, and what happened in 2008 and is happening now in Puerto Rico is the exact same story. You can go back to 2002 and the tech debacle, it’s the same thing. What’s happening over, and over, and over again is that the firms know that they can take the risk all their books, shove it onto their investors. It’s the same story, it’s conflicts of interest.