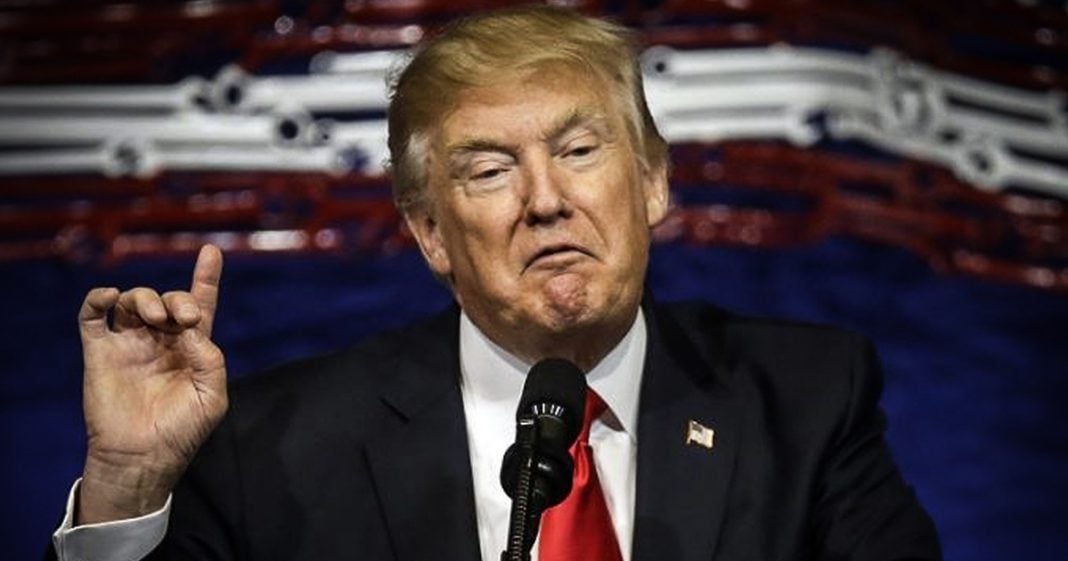 During a speech in Wisconsin, Donald Trump repeatedly referred to House Speaker Paul Ryan as “Ron”, and as if that wasn’t bad enough, once he realizes his mistake, he tries to act like he was calling some guy in the audience “Ron.”  This man is completely disconnected from reality. Ring of Fire’s Farron Cousins discusses this.

Farron Cousins:
At a speech on Tuesday of this week in Kenosha, Wisconsin at the Snap-On Tool factory, President Donald Trump made a point to talk about how much he really likes his good friend, the great representative Ron. Now, if you don’t know who Ron is, don’t worry. You’re not alone. Let Donald Trump himself explain it.

Donald Trump:
And although he could not be here today, my thanks go to Speaker Ryan, who’s represented this city for nearly two decades in Congress. You know where he is? He’s with NATO, and so he has a good excuse. I said, “Ron, make sure these countries start paying their bills a little bit more, you know? They’re way, way behind, Ron.” We have to … Well, I’m going to talk to you about that, Ron, but, “Paul, you’re over with NATO, get ’em to pay their bills.” Ron, you have to work on that, too. And, Scott, you’re right here in Wisconsin, you don’t have to bother. We’ll keep you right here.

Farron Cousins:
So, as it turns out, his buddy Ron is actually Paul Ryan. Now, that clip was very painful to watch, but what’s even more painful is the fact that he tries to cover it up by saying like, “Yeah, Ron over here, this guy. This is Ron. That’s what I meant, even though I actually said, ‘Him. He is at NATO. Ron is at NATO,’ ” He is such an idiot that he thinks he can fleece that entire crowd by saying like, “No, this guy’s Ron. I’m talking to this Ron, whoever the hell this is I’m point at. Yeah, everybody knows Ron. He’s a good guy. But, Paul Ryan, he’s over there talking to NATO. Hey, tell ’em to pay their bills.” Nothing in this speech made any sense whatsoever.

To be honest, it really calls into question Donald Trump’s mental capacity — not just the fact that he can’t remember the name of the Speaker of the House, but the fact that he is just all over the place. He can’t string a thought together. He’s interrupting himself in the middle of a sentence by talking to other people and bringing up other things and talking about paying bills and NATO and Paul Ryan and Ron. What the hell is going on inside this man’s head? Again, I have to point this out. This is a man, first of all, can’t string a sentence together without interrupting himself. Second of all, he has access to the nuclear codes at all times. At all times. Somebody follows him around with the nuclear codes so that this maniac, this psychopath, this sociopath, can launch a nuclear strike at any point, and he can’t even remember the name of the Speaker of the House of Representatives.

He doesn’t even know where our Navy warships are. He doesn’t know that South Korea wasn’t ever a part of China. This is a dangerous, unhinged, mentally unstable man that is currently the president of the United States. Now, I don’t like Paul Ryan any more than anyone else in this country right now, but I at least know what his name is. I know he’s not Ron. I don’t know who Ron was in that audience, but I’m sure he was just as shocked as we were to find out that suddenly he was just given some kind of task by Donald Trump. That’s what happened in that speech. This wasn’t about Trump screwing up somebody’s name, it was the fact that he thinks we are so stupid that we won’t notice that he screwed up. And, we’re so stupid that we won’t notice that he’s also technically the most powerful human being on the planet and he is mentally unfit to lead this country. He doesn’t want us to know that. He doesn’t want us to focus on that or pay attention to it, but that is the reality that we’re living in today. Donald Trump is a dangerous person and he’s dangerous because he doesn’t have a brain in his head.