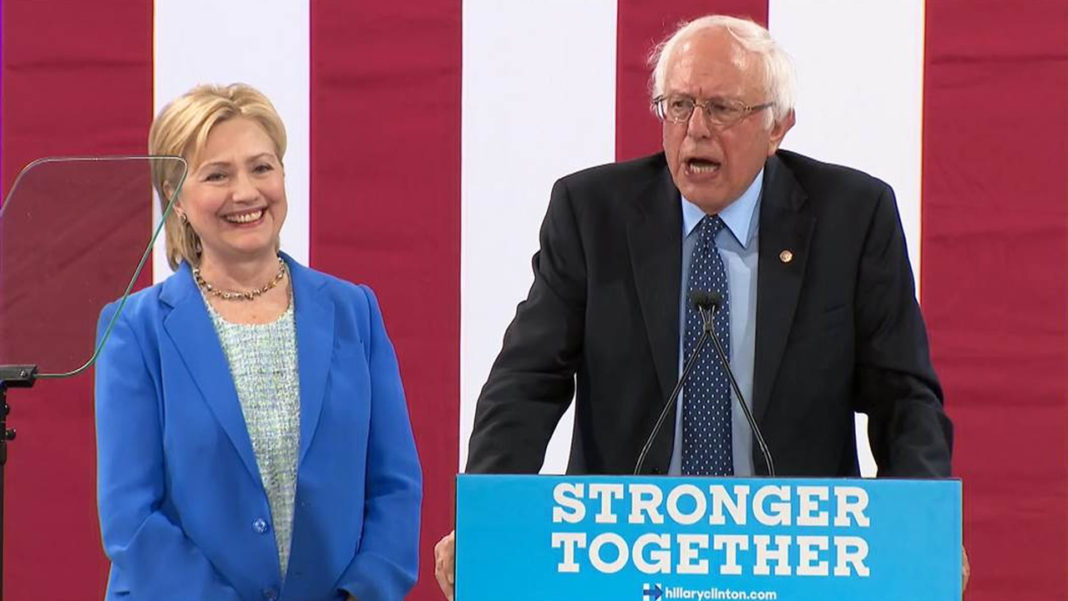 Released on Tuesday, Amie Parnes and Jonathan Allen’s new book “Shattered: Inside Hillary Clinton’s Doomed Campaign” delivers the first detailed look into the Democratic nominee’s run for President. While most of the press is reporting on the book’s conclusion that deals with Hillary’s election night woes, a tidbit about Bernie Sanders’ support of Clinton is perhaps a more fitting post-mortem for the failed campaign.

In September of last year, Clinton’s campaign asked the Vermont Senator to record dialogue for an upcoming ad. The script sent to Sanders had him praising Clinton’s ideas on healthcare and education, while slamming Trump’s economic policy. Then, the ad would conclude with Sanders using Hillary’s campaign slogan: “I’m with her.” However, Senator Sanders refused to say those words. According to the book, Sanders said:

Ultimately, the ad was not used in a TV campaign because voters in focus groups felt that Sanders did not actually support Hillary and that the ad was not authentic. Instead, the recordings of Sanders were chopped into smaller videos and used in online campaigns.

The book also gave an intimate look at the other struggles within the campaign. The book says that Hillary “liked to set up rival power centers within and outside her operation.” These factions led to constant infighting and a lack of solidarity. “Mercenaries” in the campaign “feared — appropriately — that unflattering words about Hillary or the strategy would be repeated at their own expense by those who hoped to gain Hillary’s favor.” Filmmaker Jon Favreau was asked to help with Clinton’s speech announcing her candidacy, but dropped out after he found that the campaign wasn’t “united by any common purpose larger than pushing a less-than-thrilling candidate into the White House.”

But it seems that the most costly mistake made by the Clinton was not capitalizing on the momentum gained by her rival, Bernie Sanders and failing to inspire passion outside or even within her own campaign. While Clinton was able to rally the establishment Democrats, she never resonated with the progressive sides of the party and was never able to speak to the fears of everyday Americans. Her staff had a very hard time finding inspiration in the campaign:

“Hillary’s top aides were as miserable as midlevel bureaucrats in an agency with no clear plans.”

Sanders saw what millions of voters saw in Hillary’s campaign: “It’s so phony!” Now, as Sen. Sanders is off on a “unity tour” with DNC chair Tom Perez, we cannot help but wonder if he thinks the same of the continued efforts of the Democratic party. Unless the party radically changes, following the lead of groups like the Justice Democrats, they will be doomed to more Clinton-esque failures. When Hillary spoke to President Obama on election night, she admitted that she “let the country down.” Without a new direction, the party that pushed her through the primaries will be forced to admit the same.