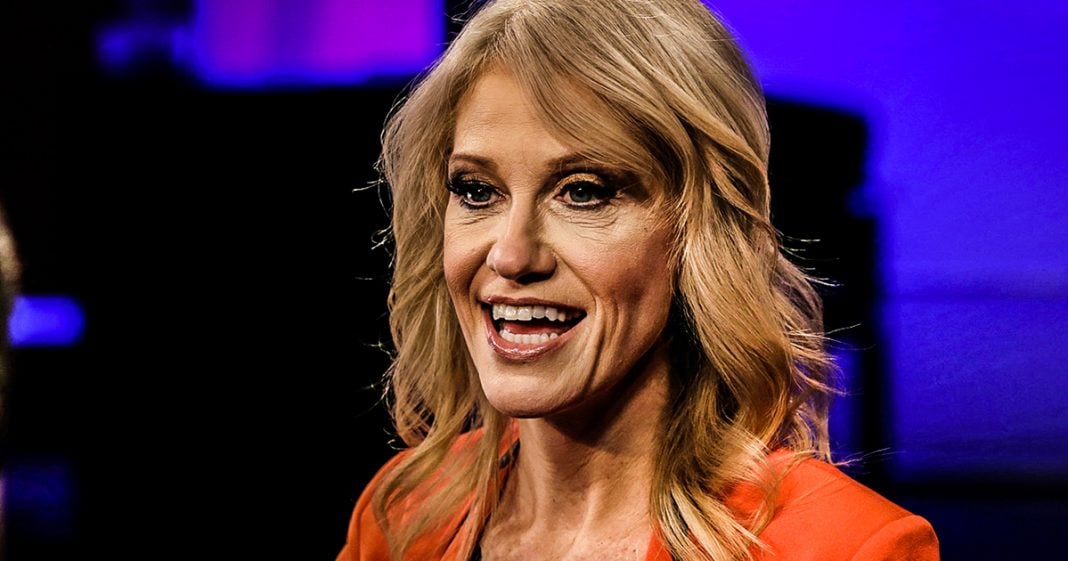 In an interview published by Politico, White House adviser Kellyanne Conway said that her critics were just a bunch of unhappy people with poison keyboards.  She said that she expected criticism, but not at the levels that she’s getting today.  The sad reality for Conway is that the critics would back off a bit if she could stick to telling the truth every once in a while. Ring of Fire’s Farron Cousins discusses this.

During an interview with Politico that was posted online this week, White House advisor, White House aide, whatever you want to call her, White House spokesperson maybe, Kellyanne Conway took a shot at her critics once again. She told Politico that her critics were “unhappy people with poison keyboards.” I guess what she’s trying to say is that they’re a bunch of internet trolls going out there just saying mean ol’ things to Kellyanne, who really isn’t doing anything wrong. She doesn’t understand why people are being so mean and horrible to her these days.

Now, according to this interview that she gave with Politico, she had explained to her children that, yeah, look, Mommy is going to be doing this thing. People are going to come at her. It’s going to be pretty ugly sometimes, but just deal with it. To be honest, that is a very good thing to tell your children. Yeah, when you’re in the public spotlight, there’s going to be the naysayers. But if she took the time to explain that to her children, maybe she should’ve taken the time to explain to her children that, hey, listen, Mommy is going to have to go on TV and lie through her teeth to the American public about things that never happened. She is the one who came up with the term ‘alternative facts.’ She is the one who invented the Bowling Green massacre that never happened.

I understand nobody likes to get criticized, but, Kellyanne, you’re inviting this on yourself. The people who criticize you, who call you out, are not unhappy people. I can tell you firsthand I am a very happy person. I love my life right now, but I will continue to criticize you anytime you feel the need to go on television and lie to the American public on behalf of Donald Trump. Anytime you make up a fake terrorist attack, we’re going to be there, as will everybody else online. It’s not because we just dislike you. It’s because we don’t want you to continue to dumb down the United States. This is our civic duty to hold you and everyone else in your White House accountable.

You may think it’s fine to go out there and give these interviews and attack the people who you claim are attacking you, but the truth is all we’re doing is trying to hold you accountable and, to be honest, try to undo some of the damage that you’re inflicting on the public today. There are Republicans out there in the United States today who, honest to God, believe that the Bowling Green massacre was a thing, that it happened, that it was carried out by Iraqi immigrants, and that U.S. citizens died as a result of it. That’s all on you, Kellyanne. You’re poisoning the public discourse. It’s not the people who dislike you. They don’t have the problems. You do.

You need to learn, and you need to take the time to teach your children, that when you screw up, you do get held accountable. When you lie to hundreds of millions of people, they’re going to come after you, and the only way you can make it right is to go out and apologize and try to do the right thing from that point forward. That’s what you need to learn, but honestly I don’t think you ever will. You’re very happy being a stooge for Donald Trump. You have no problem going out into the media and just literally making things up. It must be nice to live in a world where you don’t have to bother with things like research. You can just immediately go out there, say whatever you want. Maybe it’s true; maybe it’s not. You don’t care. You just move on to the next interview, while the rest of us have to pick up the pieces and undo the damage that you cause every time you put your face in front of a camera.