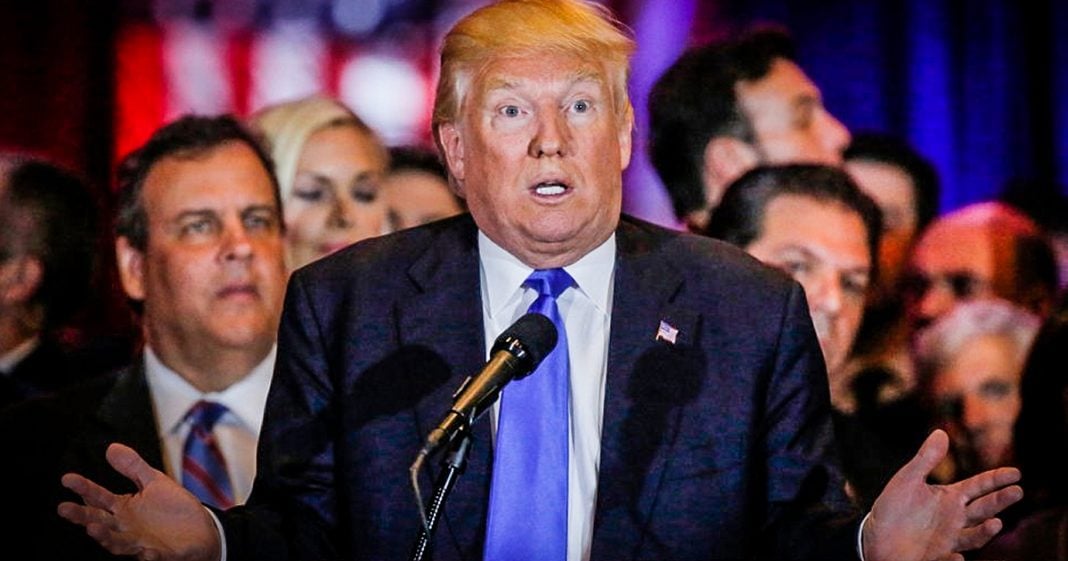 Last week, Donald Trump told the world that we were sending an “armada” of ships to North Korea. As it turns out, the ships that Trump was referring to were actually headed in the opposite direction to perform training drills with the Australians.  Trump didn’t know about this, and assumed those ships were parked outside Kim Jung Un’s palace, waiting to strike. Ring of Fire’s Farron Cousins discusses this.

Do you remember last week, when Donald Trump told us on Twitter, that he was sending an armada of ships to North Korea? We were going to muscle out Kim Jong-Un, show him what the United States is capable of, and if they even thought about testing a nuclear weapon, we were ready to strike. That is what Donald Trump, the White House, told us. We were ready to strike if they even thought about it.

Well, as it turns out, that armada wasn’t actually headed towards North Korea, that armada was headed down to the Indian Ocean, to do drills with the Australian Military. Donald Trump didn’t know that. Donald Trump thought that this armada led by the USS Vinson Aircraft Carrier, was headed to the Indian Ocean, and he thought for sure, that thing was headed to North Korea to show Kim Jong-Un, what the United States was made of.

Essentially, he lost an aircraft carrier. And this wasn’t a mistake that was immediately righted by the Defense Department, they didn’t come to him immediately and say, “Hey, ship’s not actually going to North Korea, it’s going the opposite direction. No, no, no, no.” For almost five days, Donald Trump was living under the assumption that, that warship and all of the other warships in that armada, were sitting right outside North Korea, when in reality, they were thousands upon thousands of miles to the south west of North Korea.

Donald Trump didn’t know that. What’s terrifying about this is, that as the Commander in Chief of the United States Military, Donald Trump kinda needs to be aware of things, unfortunately. And I don’t blame the Defense Department for this whatsoever, I don’t blame anybody other than Donald Trump, it’s his job to know things, and maybe if he spent a little bit more time in Washington DC, he would have known that! Instead, as usual, he spent the last weekend at Mar-a-Lago, not necessarily paying attention to where his ships were throughout the world, or what country we were going to strike. Hell, during an interview he couldn’t even remember who the leader of North Korea was during Bill Clinton’s tenure. He told reporters that Bill Clinton negotiated with Kim Jong-Un, who just a small child during the Clinton administration. And this man is in charge of the nuclear codes. He doesn’t know where the ships are, doesn’t know where the guns are, or our missiles, but he’s in charge of them.

This is a story, while humorous, should terrify everybody in this country. We have a leader who doesn’t pay enough attention to know where our ships are going, or where we’re pointing our missiles. We could be pointing them right back here at us on the United States, and this idiot wouldn’t know that. He has to start paying attention, he has to take this job seriously, because when he doesn’t, he puts us all in harms way. And here’s the other part of the equation, suppose North Korea had done something terrible, while that armada was supposed to be out there, and Donald Trump said, “Alright, go head, fire.” Well the ships weren’t there, we wouldn’t have even been prepared to retaliate even though he told us we would do that, because the ships were there, but they weren’t … This man is a danger to the United States, to be honest he probably presents more of a danger to the US than Kim Jong-Un does right now, because they can’t even successfully test a missile, and this man doesn’t even know where our missiles are.

So I ask you, which one do you think is more dangerous? A country that can’t even launch a missile, or the idiot who doesn’t know where his missiles are?