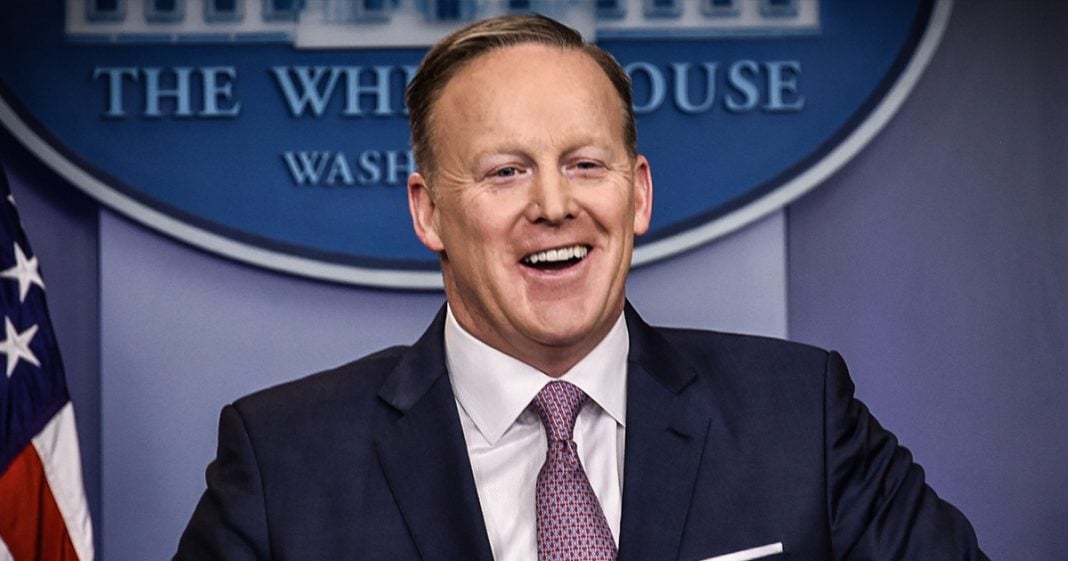 White House press secretary Sean Spicer says that those kind-hearted lobbyists coming in and out of the White House every day deserve privacy, and that’s why the White House won’t turn over the visitor logs.  Apparently, for this administration, privacy only extends to those with money, while the rest of us can’t even search the Internet without our browser history being sold off. Ring of Fire’s Farron Cousins discusses this.

White House Press Secretary Sean Spicer suddenly cares about the privacy rights of American citizens. Well, I take that back. Sean Spicer cares about the privacy rights of American citizens who also happen to be paid lobbyists for corporate America. In this current battle over whether or not this White House is going to release the White House visitor log so we can see who is coming and going from this White House, Sean Spicer told the press that look, the people who come and go from here, the lobbyists, they have a right to privacy, and we need to respect that. We need to understand that these people have a right, according to Spicer, to come in, express their views and opinions without being publicly named.

Now, I don’t know if you remember this, but a couple weeks ago remember when the Republican-controlled Congress voted to sell our browsing history so we essentially lost any right to privacy that we as regular citizens have? But suddenly when it involves a lobbyist, somebody who’s working on behalf of wealthy corporations, they get all the privacy they want. Now, the other reasoning that Sean Spicer is using to keep these White House visitor logs private is because he says, “Well, the previous administration scrubbed some of the names off their list, so because they weren’t 100% transparent, we’re going to be 0% transparent,” as if that somehow makes sense, but that’s what this White House has done from day one. Anytime something bad happens, they always counter by saying, “Yeah, but Obama did blah, blah, blah.”

It doesn’t matter at this point what Obama did. That is not a justification for anything that Donald Trumps does or doesn’t do. That is history, just like George W. Bush’s history. Yeah, we can talk about those things, but you as a White House can’t use that as a justification for your actions or inactions. It’s the job of every administration to be better than the one before it, to learn from the mistakes of the one before it, but Trump’s administration doesn’t seem to understand that, and Sean Spicer is more than willing to go out there and tell reporters that, “Well, Obama did it, so we’re going to do it.” That’s not how it works. We’re not children. You’re not a child, Sean, but that’s what you’re acting like. That’s what this entire administration has been acting like since they first came into office.

They’ve been acting like whiny children who want to blame everyone else for all the bad things that they’re doing, but this argument that these lobbyists somehow deserve privacy when meeting with the president to, as Spicer puts it, express their views and opinions, they’re not expressing views and opinions. They’re trying to change his mind about legislative efforts. They’re trying to get their will, the will of the corporations that they work for, imposed on American citizens. I’m sorry, but at that point when you’re trying to undermine the government, go around Congress and all of that, hoodwink the American public, we damn sure have a right to know.

Those White House visitor logs need to be released. I don’t care what Obama did. I don’t care what George W. Bush did. I don’t care what Clinton or anybody before him did. We’ve got a real problem here, and when Sean Spicer starts telling us that lobbyists have a right to privacy but American citizens don’t whenever we go online, that’s a very real problem. It indicates, at least would suggest to some degree, that these names are being hidden for a reason. You know, I had a conversation with a police officer one time and he told me, “Only the guilty hide,” and if Sean Spicer is hiding something, probably means there’s some dirt in that book that he doesn’t want us to see.