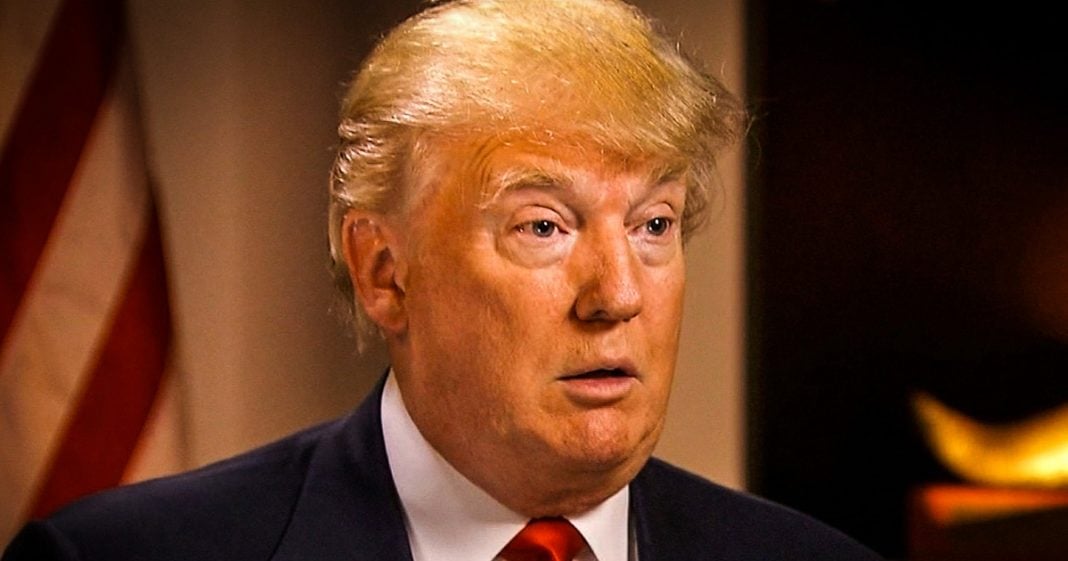 Donald Trump signed an executive order today that will require agencies to use American goods and labor by closing certain loopholes, yet Trump himself uses overseas labor and foreign guest workers for his businesses. Ring of Fire’s Farron Cousins discusses this.

Today Donald Trump is set to sign the Buy American, Hire American executive order that’s going to require federal agencies, that when possible, to buy American goods and use American labor for any projects that they may have. In addition to requiring them to buy and hire American, this executive order is also going to kind of revamp United States immigration policy with respect to the H-1B visa program, which Donald Trump is trying to get administrators to rework that, change the lottery system for those H-1B visas, and not too much is really known about what that part of the order will do. The important thing to know is that the part of the visa program that Donald Trump uses to hire foreign workers at places like Mar-a-lago, that’s not going to be touched whatsoever with this executive order, so Donald Trump can continue to hire foreign workers for less money rather than hiring American workers like his executive order calls for.

On the surface, this Buy American, Hire American is a great idea. Obviously. I think there are few people out there that would argue that we shouldn’t be buying American goods and hiring American workers. The problem is the hypocrisy of Donald Trump. This is a man whose businesses use foreign labor and foreign goods whenever possible. I mean, the majority of the Trump branded goods are made overseas where they can pay pennies on the dollar to workers. Same thing goes with Ivanka Trump’s goods. We’ve known this for quite some time. For Donald Trump to come out and have the audacity to say that federal agencies have to follow rules that he himself doesn’t follow, yeah, that is the definition of hypocrisy. Furthermore, Trump himself has exempted the Keystone XL pipeline from these kinds of recommendations. Instead of using US steel to build this disaster of a pipeline, we’re using Russian steel instead. You see where I’m going with this?

It’s one thing to go out there and say that we need to be doing these things, but it’s another to actually follow through with them. If Donald Trump was a true leader, a true role model for anyone in the United States, he would’ve been doing these same things a long time ago. The reasoning that he’s given us to why he doesn’t do this is because, “Yeah, it’s cheaper. I’m a business man. I make money.” That’s exactly what he’s doing with the federal government right now. He’s not running it as a government, he’s running it as a business. What’s good for other people is certainly not good enough for Donald Trump.

If he wants to take the lead, if he wants people to respect him, then he needs to start making all Trump branded goods in the United States with American workers. He needs to stop outsourcing all of his production to overseas markets, and bring it back here to the United States. If he was serious about creating jobs in the United States, he should just bring all his businesses back and only hire Americans. We would bring back thousands of jobs just in the Trump brand alone. He won’t do that. Because at the heart of it, he doesn’t care about creating American jobs. He doesn’t care about American workers. He cares about the bottom line.

Furthermore, he is signing this executive order in Kenosha, Wisconsin, at the Snap-On Tools factory. Wisconsin, obviously a state that he won because Hilary Clinton neglected to even go to the state during the campaign. He is, once again, pandering to American workers who are going to be hoodwinked once again into thinking that Donald Trump actually cares about them or the suffering of the American middle and underclass. But, they bought it in November, they’re going to buy it again today. Meanwhile, Donald Trump, at every given opportunity, is going to screw over American workers and somehow convince you that it was the Democrats’ fault.