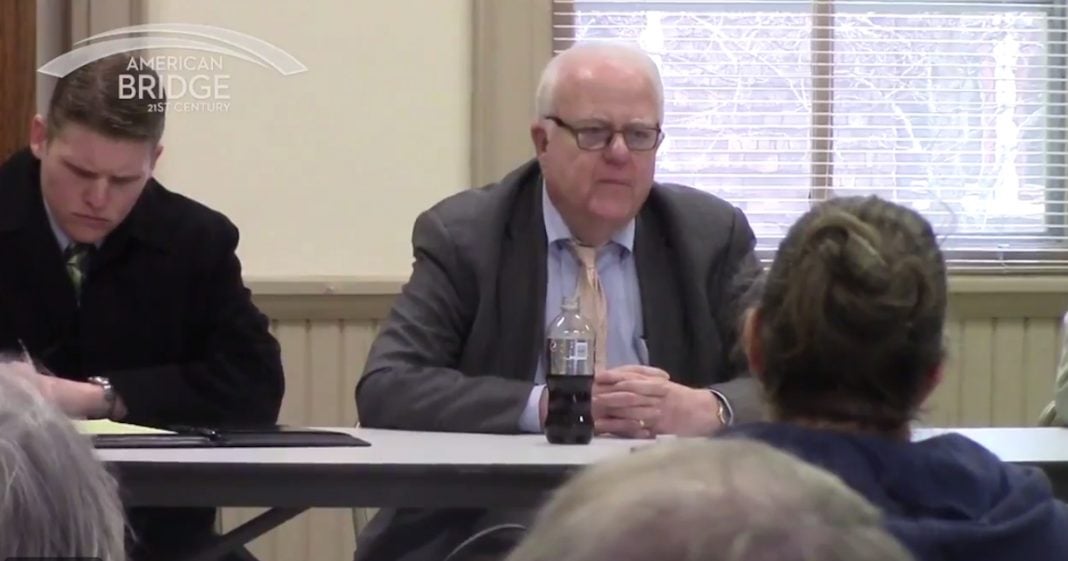 According to Wisconsin Rep. Jim Sensenbrenner, using the internet is not a necessity in America.

In a town hall meeting, a constituent asked the Republican why he voted to repeal the FCC’s privacy restrictions on internet service providers (ISP). The town hall attendee pointed out that in many areas, consumers have only one choice when it comes to who provides internet service, so comparison shopping based on privacy policies is impossible.

As of 2015, FCC reports show that only 25 percent of Americans have two or more ISPs offering high-speed internet (the FCC defines “high-speed” as 25 Mbps downstream and 3 Mbps upstream). 30 percent do not have access to those speeds at all.

Sensenbrenner answered the concerned citizen with this stupefying comment:

“Nobody’s got to use the internet, at all.”

.@JimPressOffice tells his constituents not to use the internet if they don’t like his vote to sell out their privacy to advertisers. #wi05 pic.twitter.com/lSVVx8OclO

In today’s world, living without the internet is nearly impossible. Last year, the UN Human Rights Council declared that access to the internet is now a basic human right. The Verge’s Paul Miller wrote about his year without internet as if it were some sort of monastic retreat:

“My plan was to leave the internet and therefore find the “real” Paul and get in touch with the “real” world, but the real Paul and the real world are already inextricably linked to the internet. Not to say that my life wasn’t different without the internet, just that it wasn’t real life.”

ISPs had fought the Obama-era privacy rules that banned internet providers from collecting and selling the same sorts of data that websites like Google and Facebook collected. If Facebook drastically changed their privacy policy, a user could delete their profile and stop visiting the site. However, it is much more difficult to opt-out from an ISP.

Ajit Pai, the Chairman of the FCC, said that he wants to turn privacy regulations of internet carriers over to the FTC. The FTC is responsible for regulating websites like Google and Facebook. However, that sort of action would face tremendous legal hurdles. In 2015, ISPs were classified as a “common carrier service,” giving the FCC jurisdiction over them. Recent court cases have also issued rulings that have limited the FTC’s oversight over providers like AT&T or Verizon.

Lobbying groups were quite active in pushing to overturn the restrictions on behalf of ISPs. In 2016, telcom companies spent over $87 million in lobbying efforts and another $12.8 million in campaign contributions. Somehow the lobbying firms say the move is a good one for consumers. The NCTA – The Internet and Television Association, which lobbies on behalf of cable companies said in a statement:

“Today’s FCC action to issue a temporary stay of the data security regulation is a welcome recognition that consumers benefit most when privacy protections are consistently applied throughout the internet ecosystem. As service providers, our companies are committed to providing a quality Internet experience that protects the security of personal information, and we will continue to operate with that commitment as the FTC and FCC pursue further action to harmonize online privacy protections.”

Critics of the move like Democratic FCC Commissioner Mignon Clyburn see through that weak argument. In her dissent, Clyburn said that consumers are left with no protections and will face an undue burden should an ISP violate their privacy:

“If a provider simply decides not to adequately protect a customer’s information and does not notify them when a breach inevitably occurs, there will be no recompense as a matter of course. The only recourse for customers will be individual forced arbitration before an entity of their service provider’s choosing. Rather than the Commission being able to spearhead an investigation and remuneration for consumers, each individual will have to discover the breach and prosecute it on their own.”

It is just another show of solidarity with big business and special interest groups, where Republicans in Congress and at the FCC have stomped on consumers’ rights. If a law that protects the public hinders the profits of the $97 billion industry, even in the slightest way, bought-and-paid-for politicians will scramble to repeal it. Though we elect our lawmakers, they do not act with our best interests in mind. Special interests control Washington, the American people have no say.

Of course, when we do speak up and challenge an elected official, we get people like Rep. Sensenbrenner telling us that if we do not like the favoritism shown to telcom giants, then we are told to just get off the internet. Of course, if we do decide to follow Rep. Sensenbrenner’s advice and get off the internet, we know that people like Paul Miller have done it before. Though, for Paul the consequences of leaving the internet were real:

“I fell out of sync with the flow of life. […] The internet isn’t an individual pursuit, it’s something we do with each other. The internet is where people are.”

That seems reasonable. If you do not like the way your ISP is collecting or selling your data, utter isolation is the choice you are left with.