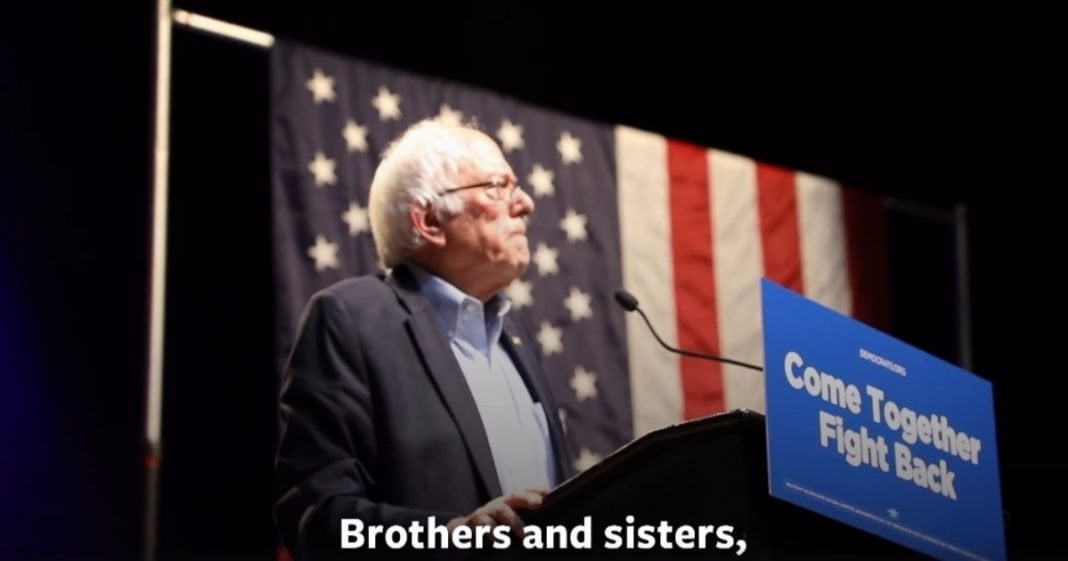 While out an about on his Unity tour with DNC Chairman Tom Perez Monday evening, Senator Sanders addressed a crowd of adoring supporters, talking the usual topics one expects from a progressive: income inequality, corruption on Wall Street, affordable education, universal education, and more.

But an unexpected moment occurred at the Portland, Maine rally when Senator Sanders’ spirited speech inspired a bit of extra spirited commentary from the engaged audience. In the middle of pro-universal healthcare applause, one voice in the crowd told the Senator exactly how to treat corporations and industries who wish to get in the way of progress.

“Brothers and sisters, at a time when 28 million Americans today have no health insurance, and many more, including many in this room, are under-insured with high deductibles and high co-payments, our job is not only to prevent the repeal of the Affordable Care Act, we have to go further.”

Sanders was speaking about his plans to introduced a medicare for all system as a replacement for the ACA, a long-time plan and the ultimate goal for progressives in America. But even as he laid out his plan, he warned those assembled: those in power who benefit from the current health care system will not give up without a fight.

To that, a voice in the crowd shouted, “Fuck ’em!”

Rather than ignore the spirited interjection, Sanders addressed the man,

“That’s not exactly the words I would use. Not bad! Not bad.”

The Senator then returned to the point.

Article continues below the video


But this lively interjection during the Senator’s speech was much more than a fun moment – it was yet another sign, amid the energy in the crowd, that the magnetism of Senator Sanders and his revolution continues, and even grows by the day.

It was clear during the election that many in the Democratic party viewed the Senator and his millions of young supporters as nothing more than a nuisance, a passing trend. Now, months into Donald Trump’s presidential term, thousands are still lining up to hear Senator Sanders say the same things he said in 2016.

The momentum is still here, and it’s not going anywhere. And to those who say that Sanders has no business leading the party?