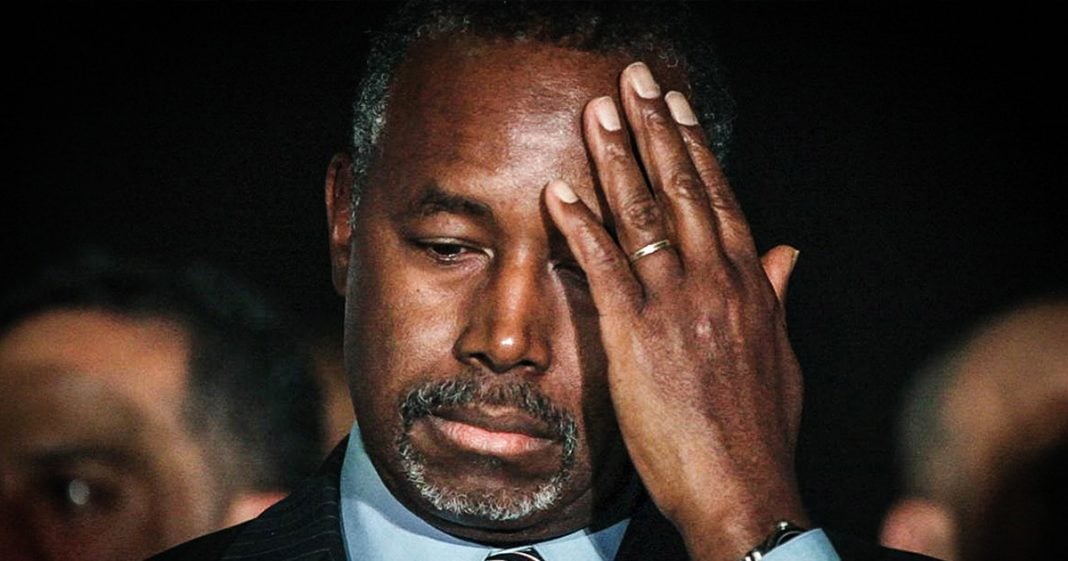 Ben Carson, the head of the Department of Housing and Urban Development, can’t seem to catch a break.  It seems that even middle school students understand that this man is not qualified to hold a position in the federal government, and they are beginning to send him letters demanding that he actually do his job. Ring of Fire’s Farron Cousins discusses this.

After he got stuck in an elevator in a Miami housing project last week, Ben Carson has found himself once again on the end of some pretty negative publicity here. As it turns out, sixth graders in Illinois know more about Ben Carson’s job than Ben Carson actually does. Junior high students in Cairo, Illinois are writing letters to Ben Carson, who is the head of the Housing and Urban Development Department within the federal government, to urge him to figure out the problem with housing units in Cairo, Illinois.

Here’s the situation. There are 185 families that live in a HUD-approved funded housing unit in this very small city that also happens to be very heavily African-American. Now HUD came in recently and said, “Look these housing units have problems. Mold, mildew, things like that. They’re generally unsafe. 185 families living here. You’ve got to get out because it’s not okay to live here.” Fair enough. HUD has decided that rather than relocate these 185 families, they’re just going to do nothing. Literally, do nothing.

You can’t go home but you can’t stay here. You’re kicking these people out of their homes. You’re giving them no other options. You’re not helping them find other affordable housing for these low-income American citizens. And that’s why these sixth graders are taking it upon themselves to write letters to Ben Carson pleading with him to do something rather than put 185 families on the street. After all, as these sixth graders point out, that’s your job, Ben. It’s not just your job to go around and condemn housing units. You’ve got to make it better. You’ve got to give these people somewhere to live. 185 families living on the streets in Cairo, Illinois and you’re okay with that?

We’re not talking about 185 people. 185 families. Now Ben Carson in the past has said that he doesn’t necessarily like public housing. And he doesn’t think that we should really be doing that because all we’re doing is holding people down. And if you want to get out of public housing, according to Ben Carson, just make more money and go buy a real house. Those are things that Ben Carson has said. Those are things that Ben Carson believes. And yet for some reason Donald Trump saw fit to put this man in charge of an agency that he is grossly unqualified to be running. And the saddest part is that these junior high students, these sixth graders in Cairo, Illinois know more about his responsibilities and what he’s supposed to be doing than he does.

You know, I think we’ve seen throughout the Trump administration some really stupid people. Some really unqualified people get positions of immense power. But when it comes to Ben Carson, he is probably the worst appointee that Donald Trump has put in power. This man, and I don’t care about his record as a surgeon, this isn’t surgery. This is housing the poor. Housing the crippled. Housing the elderly. Ben Carson is not qualified for this and unfortunately I don’t care what you say, he is not smart enough to do it. And the fact that a group of sixth graders knows more than he does kind of proves that point.