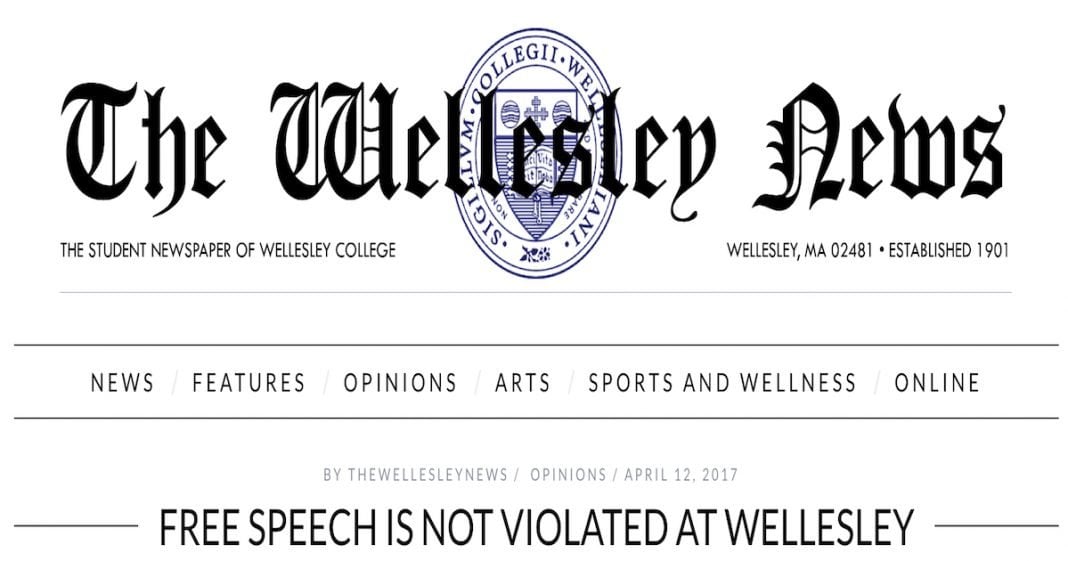 In a piece published last week, The Wellesley News staff at Wellesley College in Massachusetts said that they are not interested in “tone policing” but they defend hostility toward those that engage in speech they do not deem acceptable. The editorial piece comes as a group of professors at the college have come under fire for sending a faculty-wide email that says controversial speakers “impose on the liberty of students, staff, and faculty.”

The latest campus uproar started as controversial Northwestern University professor Laura Kipnis was invited to speak on campus. Kipnis, a self-described liberal feminist, sparked outrage when she penned an essay that was critical of Title IX sexual harassment investigations on college campuses. She said that such investigations have led to an increase in “sexual paranoia” and that they have the unintended consequence of instilling unreasonable vulnerability in women. Her contentious comments even led to her own Title IX investigation at Northwestern. Kipnis was invited to speak at Wellesley in March as part of a “Censorship Awareness Week” series.

The editorial in The Wellesley News attempts to separate “hate speech” from protected “free speech” saying that freedom of speech exists “to protect the suppressed, not to protect a free-for-all where anything is acceptable, no matter how hateful and damaging.” The Supreme Court has roundly rejected the distinction of hate speech being illegal, unless it leads to imminent violence.

Still, the student publication says that extreme measures must be taken to prevent controversial speakers from bringing their beliefs to the campus. The paper says that if after being “educated” on issues, someone still holds an unpopular belief, they should face harsh consequences:

“[I]f people are given the resources to learn and either continue to speak hate speech or refuse to adapt their beliefs, then hostility may be warranted. If people continue to support racist politicians or pay for speakers that prop up speech that will lead to the harm of others, then it is critical to take the appropriate measures to hold them accountable for their actions.

Likewise, in their email, the dissenting professors quoted a piece in The New Yorker, where Jelani Cobb wrote, “[t]he freedom to offend the powerful is not equivalent to the freedom to bully the relatively disempowered.” The professors go on to say that speakers like Kipnis force students to:

“object in order to affirm their humanity. This work is not optional; students feel they would be unable to carry out their responsibilities as students without standing up for themselves.”

Fighting censorship at colleges has been a cause championed by those on the right who speak out against the liberal culture on campuses across the country. However, freedom of speech is not an ideal limited to one side of the political spectrum. While left-leaning student groups seek to limit the scope of the First Amendment on campus, Republicans are busy doing everything from censoring art to crafting laws that limit protests. Protecting free speech is not a partisan concept.

While it is one thing to protest a speaker with an unpopular opinion, it is an entirely different animal to attempt to limit the definition of free speech. There is also a particularly chilling effect on free speech when hostility is welcomed in the absence of rigorous debate.

The Wellesley News says that they are in support of open forums and welcome debate, yet they champion the homogeny of opinion. By saying things like “problematic opinions need to be addressed” and lauding that “Wellesley forces us to both recognize and grow from [previously-held biases],” the editorial staff is saying that all opinions are allowed, so long as they conform to certain ideals.