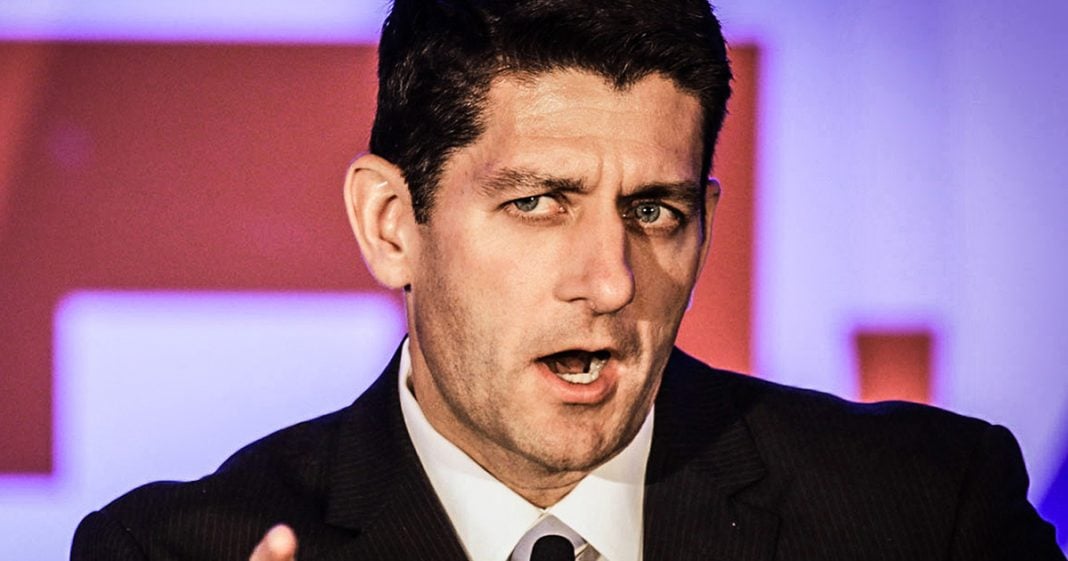 Rather than using his Congressional recess break to reconnect with his angry constituents, Paul Ryan chose to avoid his voters altogether and instead spent most of his time fundraising with wealthy Republicans.  No wonder he’s the least popular politician in Washington, D.C. today. Ring of Fire’s Farron Cousins discusses this.

For the second time in three months, House Speaker Paul Ryan went on recess, like his fellow members of Congress, but he did not hold a single town hall meeting during this recess. Now, for somebody like Paul Ryan, who currently holds the lowest approval rating of any member of Congress, it would make sense to go out and talk to your constituents and explain to them why you’re doing the horrible things that you’re doing, or even better, listen to your constituents and find out what they actually want you to be doing. But no, once again Paul Ryan decided that he didn’t need to spend any time with the voters, and instead, he wanted to spend time with his wealthy fund raisers.

Back in February, during the Presidents Day recess, Paul Ryan raised a ton of money over a nine-day span, a couple hundred thousand dollars just in February. Now, this was before all of the horribleness with the American Healthcare Act and all of the scandals involving Donald Trump that Paul Ryan refuses to acknowledge. Obviously, Paul Ryan needs to go back to his donors and say, “Look. I know things look bad, but if you don’t give me money, I’m not going to last as Speaker of the House,” and that is absolutely true. To date, so far in 2017, Paul Ryan has already raised over $17 million. The only question at this point is, is that enough?

Now, we saw last week in the Kansas special election where a far left Berniecrat Democrat almost beat a Republican in a very red district with almost no money, no help from the DNC, no help from the State Democratic Party, and only a few phone calls made from the DCCC to help out this candidate, and he closed a 20 point gap between he and his opponent. Now, Paul Ryan understands this, and he understands that money may not be everything in the upcoming midterm elections in 2018. That’s why he’s spending more time with his donors than he is with his constituents. As we’ve seen, that is not a winning strategy anymore.

For years Republicans have thought that they could just meet with their donors, get some money, maybe go out make a stump speech or two, and that would be enough to calm the voters into thinking that they’re actually on their side. Not anymore. The voters in Wisconsin have demanded that Paul Ryan come back home, hold a town hall, and actually listen to the people who put him in office. Instead, he chooses to go on vacation. Everybody needs a break every now and then. There’s nothing wrong with that.

The fact that he’s choosing his fundraisers over his own constituents shows you where this man’s loyalties lie. He doesn’t care about the voters back in his home district, a district that very easily could vote him out in the next election. He’s worried about the fact that the Freedom Caucus, that Donald Trump, everybody is threatening his speakership because he can’t get anything done. Donors, at least right now, still seem to have a little bit of faith in Paul Ryan, but as we tick on throughout this year, as we see Paul Ryan continue to fail on initiative after initiative, that support is going to dwindle. Suddenly, that $17 million that he’s raised in 3 1/2 months isn’t going to sustain him into the 2018 midterms, and it’s all because this man decided to ignore his constituents, and instead, focus on wealth Republican donors.