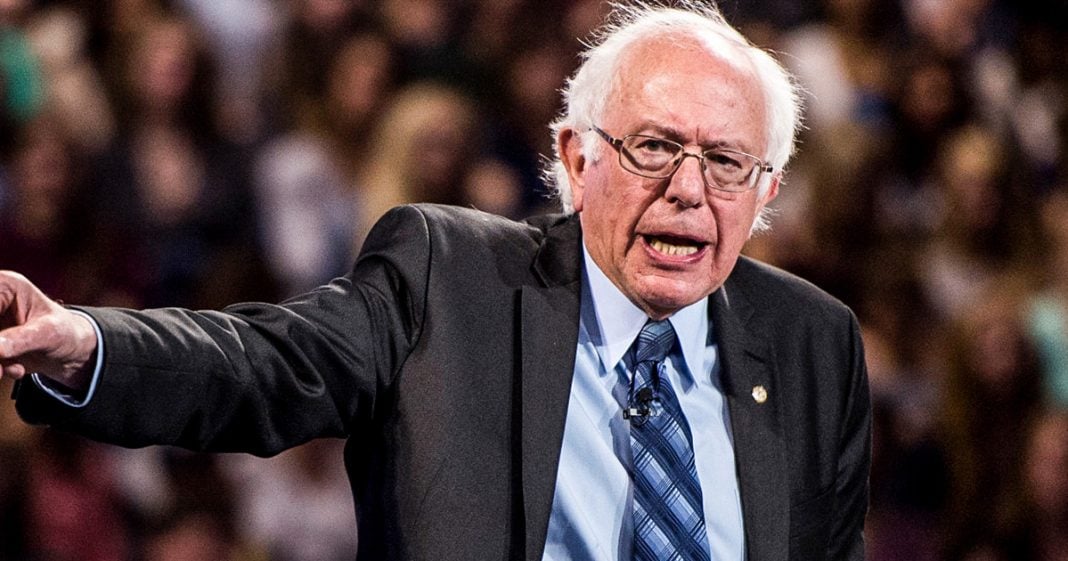 Establishment Democrats – both strategists and sitting politicians – are beginning to warm up to the idea of letting Bernie Sanders take on a stronger leadership role within the Party. But they still miss the point as to why he’s popular.  They want to use his name – not his policies – to attract more voters, and that simply won’t work. Ring of Fire’s Farron Cousins discusses this.

There was a very interesting article in The Hill this morning talking about the fact that establishment-type Democrats, both campaign strategists, Democratic advisors, sitting politicians, everybody like that, those establishment types, are actually open to the idea of letting Bernie Sanders come in and help steer the party forward, but as the article continues, it becomes clear that these people who are suddenly warming up to Bernie Sanders aren’t doing it because they want to embrace his policies. Instead, they want to embrace his popularity. They don’t understand that the reason Bernie Sanders is popular, is the most popular politician in the United States, it’s not because his name is Bernie Sanders or he looks like everybody’s grandfather. It’s because he is out there advocating for policies that actually help people, something the Democratic Party actually used to stand for.

You know, 15, 20 years ago, maybe even a little bit before that, we wouldn’t even be having this discussion today. The Democratic Party, back before Bill Clinton was elected and we let these new way Democrats, the DLC come in and push the party further to the center, borderline to the right, and it was at that point that the party stopped caring about average people, about the middle class, about the underclass. They started only caring for the 1% just like the Republican Party. Then, after Citizens United, you’ll notice a trend that happened, and this is really interesting. Before Citizens United, the top donor group to the Democratic Party was trial lawyers, people who go out there every day and take on massive corporations to fight for injured victims in the United States. After Citizens United, the top donor to the Democratic Party is Wall Street banks.

The Democrats think that they can have it both ways. They think that they can embrace Bernie Sanders the politician but not his ideas. Instead, they want to embrace the politician while still taking money from Wall Street banks and corporations. That is not a winning strategy. That’s not a winning combination, and it goes against all the things that Bernie Sanders is out there advocating for, because guess what? His policies aren’t going to be super great for corporations. They’re going to make corporations have to cough up just a little bit more money every year. Now, don’t worry. They’re still going to make their multi-billion dollar profits, but those profits are going to go down slightly. You know why? Because we need universal healthcare in the United States. We need debt-free college education. We need investments into our infrastructure. We need to protect our environment. Those things cost money, and the corporations who currently aren’t paying taxes or aren’t paying their fair share in taxes, like the top 1%, those are the people who are going to have to cough up a little bit more to make this country great again.

See, we can make America great again, but not with the policies of Donald Trump and not with the policies of the Democratic Party or the Republican Party. We need to listen to people like Bernie Sanders. There is a reason he is so popular. Again, the Democratic Party, these strategists who are now warming up to the idea of, “Bring him on in. Let’s listen to him,” they don’t care about his policies. They want his email lists. They want to use his podcast that he’s starting. They want to bring in all these new Democratic voters and then convince them that they don’t actually want the things that Bernie Sanders is talking about. They don’t want debt-free college education. They want to give corporations tax breaks, but it’s not going to work.

I think we’re in a new era of politics in the United States, and I think the people that Bernie Sanders woke up during this last election, the people who understood that these policies are possible, and that there are people out there pushing for them, they’re not going to be hoodwinked by either the Republicans or the Democrats. We’re going to see a real movement in the United States where hopefully within a couple years we have third, and fourth, and fifth parties out there who do stand for these things, perhaps a true representative government that’s not Republican or Democrat. Maybe we have three or four in the mix at that point, but until we get there we’re going to be locked in this stranglehold that the Republicans and the Democrats have put us in, and both of those parties right now represent the wealthy of the wealthy, the top 1%, and the Democrats suddenly saying that, “Oh, well we like Bernie Sanders,” isn’t going to fool anyone.