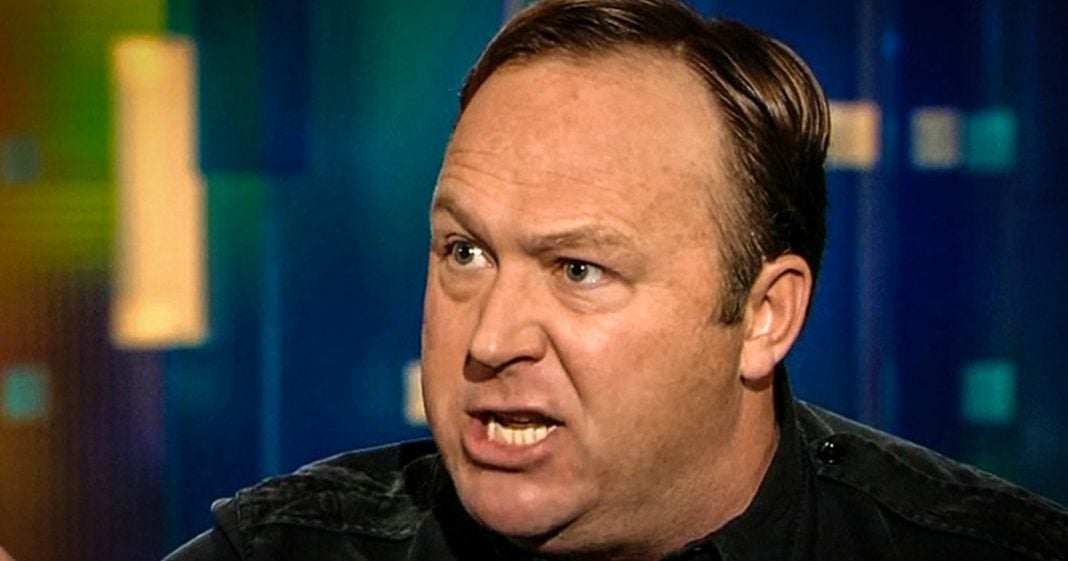 During a custody hearing between Alex Jones and his ex-wife, Alex Jones’ lawyer claims that the right wing conspiracy theorist isn’t as crazy as he appears on his show and he’s just playing a character.  Jones’ ex-wife is concerned about her children being exposed to her ex-husband’s rantings while they are in his custody, but his lawyer says that even Alex himself doesn’t believe the crazy things he says. Ring of Fire’s Farron Cousins discusses this.

In case you weren’t aware, Alex Jones, the right-wing conspiracy theorist, host of Infowars, is currently going through a pretty nasty custody battle with his ex-wife. According to his ex-wife in a recent hearing, she doesn’t like the fact that Alex Jones goes on air in their own home, that’s where his studio is, says all of these crazy things with the kids sitting right there. The kids listen, okay? His kids are paying attention to the dangerous, harmful things that he is saying every single day. His ex-wife is furious about this. She doesn’t want her children to be brainwashed. She doesn’t want her children to grow up believing that this is an acceptable way to behave.

Now, here’s the thing about this. I don’t know which is actually worse, if Alex Jones believes in the things he says or if he’s just pretending in an effort to make money. Because either way, the things that he says are dangerous. The things that he says inspire people to do crazy, dangerous things like take a gun into a pizza parlor and start shooting up the place. That is on Alex Jones’ head. I know he’s apologized for it but that means exactly squat. It took him several months after that gunman went into that pizza parlor to come out and say, “Yeah, I’m sorry. I was wrong.”

That’s what Alex Jones’ ex-wife is concerned about for her children. Because even if it all is all for show, even if Alex Jones is the most normal, sane person in the universe, his kids aren’t seeing that if they’re watching his show. Kids are very impressionable. I don’t have to tell anybody that. We know this. We know that they do get impressioned by the things they watch, but most importantly by their parents. The largest role-models a child will ever have are the parents.

When you have one parent who goes online every single day and says that President Obama might have been part of some kind of lizard race or that there’s a secret pizza parlor menu where you can order child sex, those things leave a lasting impression on your children. Whether or not it’s an act is irrelevant. The things that Alex Jones says are dangerous and harmful to children and that is what his ex-wife is trying to convince the court. Because to be honest with you, I personally didn’t even know Alex Jones had kids, but knowing this and knowing that they’ve been in that room with him while he spews this hatred, makes me sick.

Alex Jones should not be allowed to have custody of these children until he finally comes out, ends this show, admits it’s all an act, possibly goes to therapy or counseling, and then maybe he can be a good father. But if you’re out there teaching your kids that climate change isn’t real or that there’s lizard people or that chemtrails are controlling our brains, you are too crazy to have kids. These kids need somebody that they can look up to. Somebody that they can respect. Somebody who’s going to teach them right from wrong. Somebody smart enough to help them with their homework. Unfortunately, Alex Jones isn’t that kind of guy.